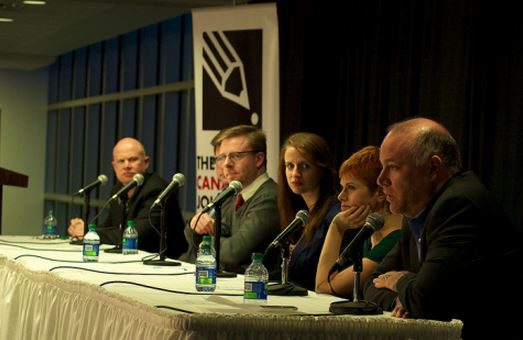 6 tips on how to do a great live interview

It’s time to talk about how onstage interviews are, too often, awful. We see them again and again: live, onstage presentations where the interviewer mistakenly believes he or she is as important as the guest. University of King's College journalism professor David Swick shares his tips on how to interview onstage and moderate panels.

A panel of journalists discuss social media and political reporting in Ottawa. Photo courtesy of Matthew Lee for the Canadian Journalism Foundation

Onstage was Pulitzer Prize-winning writer Richard Ford. With him: a university professor poorly selected to interview the author.

More than 400 people recently came out to see Ford in Halifax. Even before the interview began, warning bells rang. The professor's introduction of the writer went on for more than 10 minutes—and was all about the professor, not Ford. The interview featured more of the same. The questions were long, rambling monologues about what books the professor had read, what U.S. states he had visited and which philosophers had shaped his thought.

It’s time to talk about how onstage interviews are, too often, awful. We see them again and again: live, onstage presentations where the interviewer mistakenly believes he or she is as important as the guest.

Some onstage interviewers, of course, do a great job. Many, unfortunately, do not. I showed my journalism students a video of novelist Joan Didion being interviewed onstage by a California professor who just talks and talks and talks. At one point he even says “full disclosure” and states his family's political history.

The audience doesn't care. The audience wants to hear from Joan Didion, who sat, polite and silent, while time bled away.

Ford, too, sat silently through most of the first 30 minutes of the Q&A in Halifax. Then he appeared to choose a different approach, and started facing the audience (not the professor in the adjacent armchair) and talking at great length himself. Thanks to this and to questions from the audience, the interviewer was squeezed out of the final half of the evening.

On rare occasions, the interviewer is of enormous interest to the audience. Usually, this is not true. So I am starting to bring to journalism classes a new topic for discussion: how to interview onstage, And a related skill: how to moderate a panel.

Here are a few basic points for onstage interviewers to consider:

David Swick is an assistant professor of journalism at the University of King’s College in Halifax.