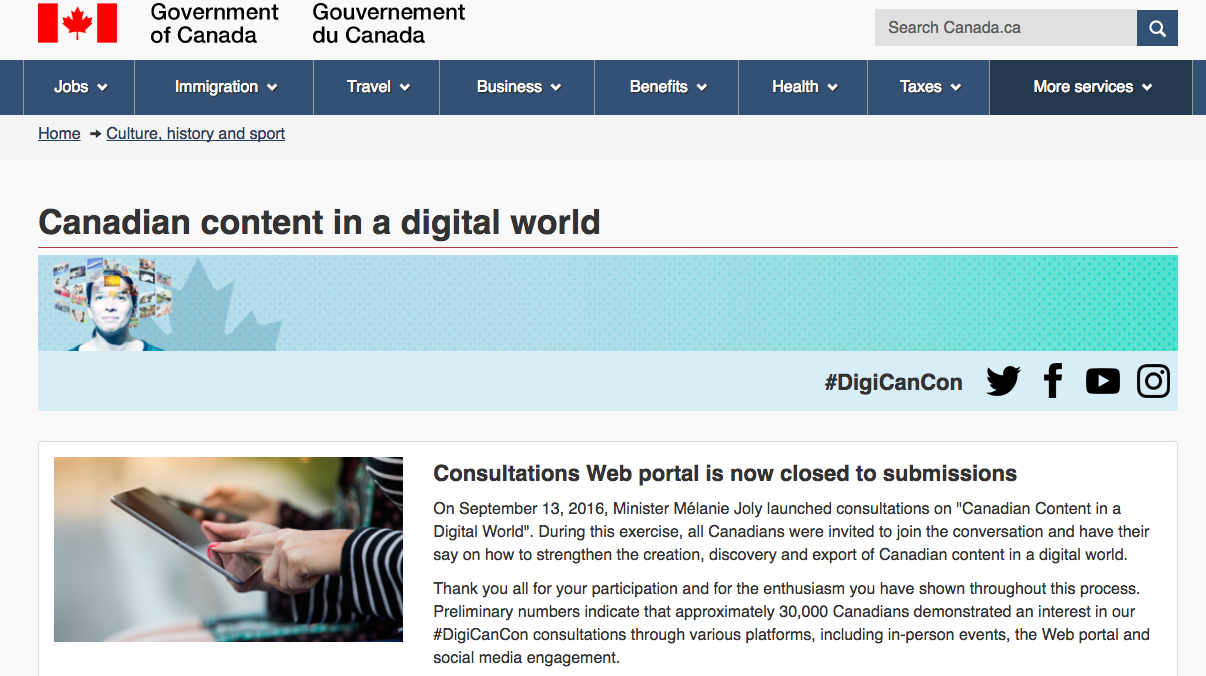 Here’s four of the big consultations that could change Canada’s media landscape.

Having trouble keeping track of the many consultations happening to fix the Canadian media landscape? We’ve made a handy guide so you can keep them all straight in 2017.

This set of consultations was announced by Heritage Minister Mélanie Joly in 2016 and are being run by the federal Ministry of Canadian Heritage.

They are aimed at giving Canadians the chance to “have their say on how to strengthen the creation, discovery and export of Canadian content in a digital world.” Joly had been signaling in the months leading up to the announcement that the federal government was very interested in looking at the media question for sometime, saying during the announcement of the public consultation in April that she wanted Canadian media organizations to boost Canadian content. She also said the CBC should take more “Vice-like” risks—during an interview on the CBC.

A lot of consultations. According to a ministry press release, 10,000 Canadians filled out a survey in the months leading up to the announcement of the official consultations in September. In-person consultations took place across the country—you might have caught one on Facebook Live—alongside digital consultations. They closed towards the end of 2016.

According to the consultations website, the results are currently being tabulated by Ipsos and a report will be released by the end of the month.

The Standing Committee on Canadian Heritage

The committee is chaired by Liberal MP Hedy Fry, who promised The Canadian Press that this set of consultations would go better than some of the ones done by other MPs. A few journalists-turned-MPs are also on the committee.

This set of consultations was a deep dive into what is happening to local media and the news media industry.

After many witnesses testified the committee produced an interim report that was presented in Parliament in December.

Parliament resumes Jan. 30, so expect an update then. In the meantime, you can read every submission by every witness who appeared before the committee so far.

The Public Policy Forum, an Ottawa-based think tank led by Ed Greenspon, a former editor-in-chief of the Globe and Mail. Heritage Minister Mélanie Joly’s office confirmed in June that the Forum would work on the consultations.

The Forum’s mandate is to work on consultations about what policy the government could put in place—if anything—to improve the state of the media industry in Canada.

A series of consultations and six roundtables  have taken place across Canada. Though the report isn’t out yet, Greenspon did tell J-Source a little bit about what he has heard across Canada.

A report will be released Jan. 26. However, through freedom-of-information requests, CBC was able to obtain an interim report and summaries of three meetings that took place in 2016. Among the recommendations at that point were imposing fees on Facebook and Google and making changes to Canada’s tax laws.

The more accurate question is what were they trying to do, as this report wrapped up in mid-2016,with results being rolled out in 2017. The review was sparked by public concern over loss of local programs and news in chain-dominated markets.

The CRTC ran this one.

After over a year of consultations, a new policy framework was released on June 15.

The results are in. Licensing requirements remain unchanged at 14 hours of local programming weekly in big cities and seven hours in smaller centres. Instead of new funding, the CRTC opted to shuffle the existing deck by loosening up the industry’s required five per cent of revenues contribution to Canadian content – mainly delivered via the Canada Media Fund – and to local expression, mainly delivered via community access TV channels.

Under the new rules, a portion of CanCon contributions can now be redirected to local news production. Further – on the theory that social media and digital platforms provide alternatives to community TV in urban areas – cable providers in cities over 1 million are no longer required to fund community TV channels, but can instead allocate local expression funds to news production or to community channels in their smaller markets. Reallocation will also be allowed in small markets, but capped at 50 per cent of local expression funds. A proposal to create an arm’s length  funding agency for community media was flatly rejected, though citizen advisory boards are now required in cities over 1 million.

Meanwhile, the existing Small Market Local Production Fund will be replaced by an Independent Local News Fund, and six larger stations in BC and Ontario are now excluded from applying – a move intended to free up existing dollars for smaller fish. Supported by a levy of 0.3 per cent of broadcast revenues, the pool provides some $20 million annually. It will be administered by the Canadian Association of Broadcasters and evaluated in five years.

The CRTC also has several other reviews upcoming.