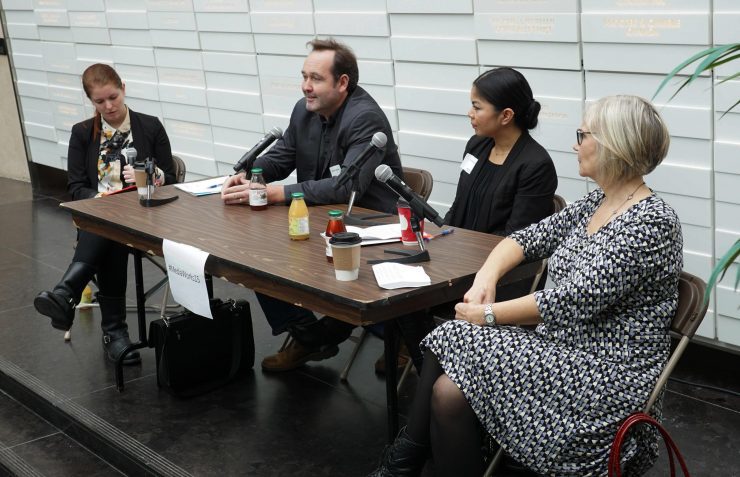 All media work has value

How should institutions better protect interns, and what can media workers do to protect themselves?

At a time when unpaid internships prevail and precarious employment seems the norm, how should institutions better protect interns, and what can we media workers do to protect ourselves? These questions were the focus of the Media Workers Forum, an event for CWA Canada Associate members — student, aspiring and precarious (intern, temporary, part-time) media workers—in Toronto on November 14.

The consensus was that despite having different goals, unions, journalism schools, and employers should all work to create quality internships in the media.

If unpaid internships unfairly benefit the privileged, and media organizations use unpaid interns (not to mention user-generated content) to “squeeze every penny out,” how can we ensure that media includes the diverse voices and quality, accurate information that are critical to democratic society?

“This is all about monetizing journalism,“ Rauhala said, before making the link between journalism students being expected to work for free to a larger labour market issue that she said the country has been ignoring for 11 years: “Opportunities … don’t exist for a generation of workers,” in various fields. “Journalism schools and unions need to try to instill some reality and quality into the landscape,” she said.

Media workers need to do the same. An afternoon presentation with two Canadian Media Guild organizers reminded attendees that advocating for, and asserting, our rights as workers is the path to building sustainable, meaningful careers in the media. It all begins with valuing your work and worth throughout your career—beginning with your internship.

“A lot of people approach internships with a cap-in-hand attitude, but you have value. Your work has value,” said writer and director Buffy Childerhose. Journalist, writer and producer Denise O’Connell added that “employers will always try to get us to do stuff for nothing,” and while it’s okay for some projects to be labours of love, when someone asks us to work for free we should consider:

Aside from occasional labours of love, we should always negotiate for compensation. We all know “exposure” doesn’t pay the mortgage, but we often just sit back and take whatever we’re offered, O’Connell noted, and “it’s not just about you.” When we don’t value ourselves, we lower standards for the whole industry. As Childerhose put it, “When I negotiate poorly, I’m screwing you guys.”

You’ll know what proper compensation looks like for the work you do—and which contracts you should walk away from—if you’ve made the effort to be part of a network. And that’s not necessarily about joining a union. It’s about building community. Childerhose invited attendees to rethink the term “networking” as something we do not to get ahead but to be informed about where we are, and to work collectively with others to address industry challenges. We all have more power when we know, and advocate collectively for, our rights under the law, whether we’re interns, freelancers or employees.

“Work hard and do good work,” O’Hanlon had told the audience earlier in the day, “but that doesn’t mean you have to be exploited.”

Lisa Ferguson is a Toronto-based editor and writer. For the past two years she’s been the author of Toronto’s Vital Signs, an annual “report card” on the quality of life in the city. This story was first published on Story Board and is republished with its permission.

Editor's note: J-Source associate editor H.G. Watson moderated a panel at the Media Workers forum. She was not involved in the editing of this article.