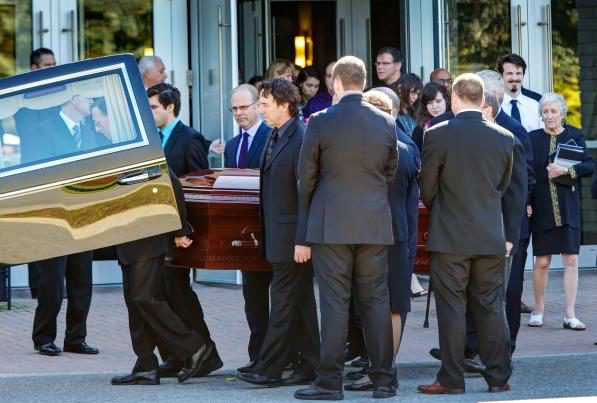 The Ottawa Citizen’s Matthew Pearson recently covered the funeral of Ottawa bus crash victim Karen Krzyzewski. He shares his advice for reporting on such events.

The Ottawa Citizen covered the funeral for Karen Krzyzewski, who was killed in September’s fatal bus crash when it collided with a Via Rail train in Ottawa. Photo credit: Chris Mikula/Ottawa Citizen.

By Matthew Pearson, reporter for the Ottawa Citizen

After the initial shock of last month’s bus-train crash in Ottawa passed, one of the first things we considered in our newsroom was how to cover the funerals of the six people who died in the Sept. 18 tragedy. Given that the crash had garnered so much local and national media attention, there was little question we would attend the funerals.

But I think it is still appropriate for editors, producers and reporters to discuss the merits of going to such events—particularly if the deceased are not public figures. In my experience, these decisions are made on a case-by-case basis. For whatever reason, certain tragic events—in Ottawa, the recent bus-train crash and the high-profile death of a young female cyclist several years ago, are two examples that come to mind —capture the public’s attention, so much so that the deceased’s funeral seems to move from the private to public sphere. At the same time, we don’t always cover the funerals of murder victims or those killed in traffic accidents, even if such events have been reported on.

Covering a funeral is not easy. They are often profoundly sad, but that doesn’t mean many aren’t also filled with joy, celebration and humour. The writing requires a gentle hand—one that is able to capture in words the pulse in the room.

Although I offer the following tips for covering the funerals of private citizens whose sudden deaths captured the media’s attention, the same logic applies at the funerals of public figures. We in the media may sometimes forget that while the deceased might have chosen a public life, their partner, family and friends did not, and they deserve our utmost respect and empathy in their time of grief.

Reach out to the family by telephone ahead of time to introduce yourself and ask if you can attend the service. I was assigned to cover a funeral recently and the family had said in a statement that media were not welcome. Nonetheless, I called to explain who I was and what I wanted to do and they agreed. They also told me that they appreciated being asked in advance, instead of my ignoring their wishes and just showing up.

Show your respect by looking good. That crumpled suit on your office floor or the micro-mini you wore to the club on Saturday is not appropriate. Wear formal clothing, preferably in subdued colours.

You want to be able to see and hear everything, but you don’t need to take up a seat that would otherwise be filled by a family member or close friend. Find a place at the back, preferably on the aisle, so you can see the procession as it enters and exits the chapel.

Some editors might balk at this suggestion, but you do not need it and may be tempted to check it or send a quick text during the service, and that is not appropriate.

5.      Be discreet while taking notes or recording

If the family has allowed you to attend, then treat it as you would any other assignment. Record it and take careful notes you can refer to afterward. But don’t rustle your pages or make a lot of noise.

Sometime when people speak at a loved one’s funeral, they rely on clichéd language—“She was a saint among us” or “He died doing what he loved.” Those are honest sentiments, but you should listen closely for anecdotes and stories that give the deceased more dimension. Pay attention to the details contained in the eulogies and the service itself. If, for example, the deceased loved gardening and the altar is adorned with flowers, find out what kind of flowers they are. That kind of detail connects the funeral to the deceased.

If the program doesn’t list every speaker by name or you can’t make out someone’s name when they’re speaking, track down the officiant or someone from the funeral home afterward to get names and their proper spellings. The immediate family may have agreed to let you attend, but this is not the kind of thing you should bother them about.

If the funeral is not followed by a burial service immediately afterward, the family of the deceased often hosts a reception in the church. I usually skip these for two reasons: the funeral itself has surely provided more than enough material for your story and the reception is the family’s time to mingle with people who attended the funeral. If you’ve got what you need for a story, there’s no reason to overstay your welcome.

On your way back to the newsroom, start thinking about a lede and the anecdotes or details that stood out the most. If you recorded the service, play it back and transcribe key passages. A colleague of mine also listens to the songs played during the service to help recreate the scene in her mind once she’s back in the newsroom.

Objectivity and sensitivity are not mutually exclusive, and few assignments require us to be more sensitive than funerals. Sometimes the music, eulogies or sight of other people in such deep despair will bring tears to your eyes. That’s OK. But keep in mind that it’s not about you and that you are there to do a job. When you’re writing, think about how certain anecdotes or stories told at the funeral could be misinterpreted by readers. The last thing you want  is cause a grieving family more harm by including details that cast aspersions on the deceased’s character.

Matthew Pearson is a graduate of Carleton University’s Master of Journalism program. He covers provincial affairs for the Ottawa Citizen