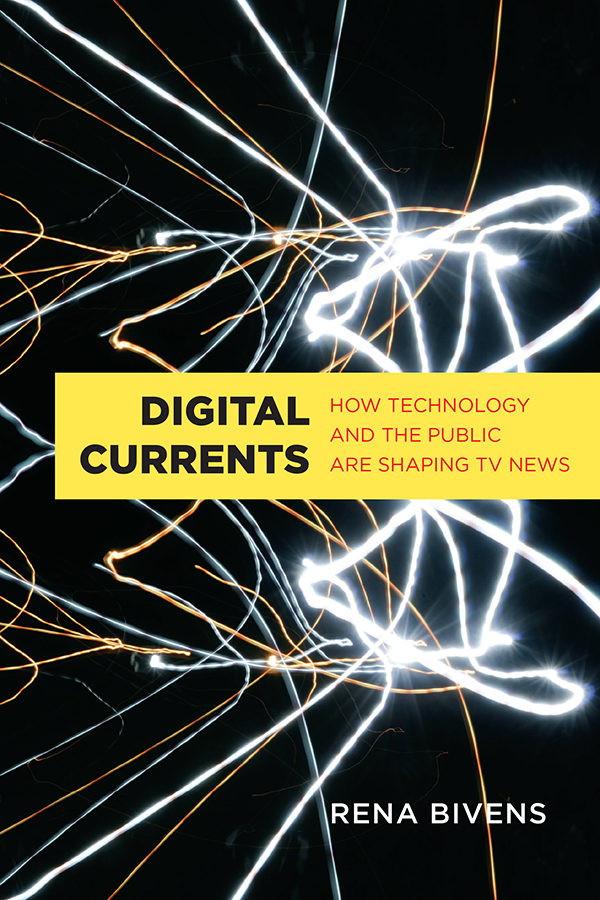 Drawing from extensive interviews with more than 100 key players in Canadian and British broadcast newsrooms, Rena Bivens’s Digital Currents is rich with insider examples and perspectives on the roadblocks and the rewards of making TV news in the digital age. Concordia University’s Corrine Smith reviews the book.

Working in television isn’t what it used to be.

Ask any TV journalist on the job to describe a typical work shift in this digital era and it’s a multitasking frenzy. Breaking news, live hits, tweeting updates, blogging—it’s often all in a day’s work, on top of video shooting and editing. For producers, the digital media ecosystem also marks a profound shift in audience relations.  The rise of citizen journalism and user-generated content means there are more ways now than ever for the public to participate in news production through online comments, photos, videos, social media and independent reporting.

Where does this leave TV news and what is its role in the ever-evolving digital media ecosystem?

That question is key in Rena Bivens’s new book Digital Currents: How Technology and the Public are Shaping TV News (University of Toronto Press). Bivens provides a thorough behind-the-scenes view of TV news production and the various ways technology influences it.

Drawing from extensive interviews with more than 100 key players in Canadian and British broadcast newsrooms, her ethnography is rich with insider examples and perspectives on the roadblocks and the rewards of making TV news in the digital age.

How do newsroom leaders decide how to cover a story? How do they assign stories? How has digital technology changed the way TV stories are told? How do reporters navigate these changes in their work? Bivens walks through all the elements of news production, painting a very complete picture of the realities of this process along the way.

Digital Currents also explores the phenomenon of citizen journalism and how it challenges the traditional authority that “professional” journalists have exercised on the news agenda.  As more people commit “acts” of journalism thanks to the widespread availability of sophisticated digital media tools, professional journalists are being forced to renegotiate their role in news production.

Bivens’s work provides context for that process, while documenting efforts underway in major newsrooms to redefine the relevance and importance of TV news in the digital age. In that way, Digital Currents is a valuable resource for both media scholars and journalists interested in the future of broadcasting.