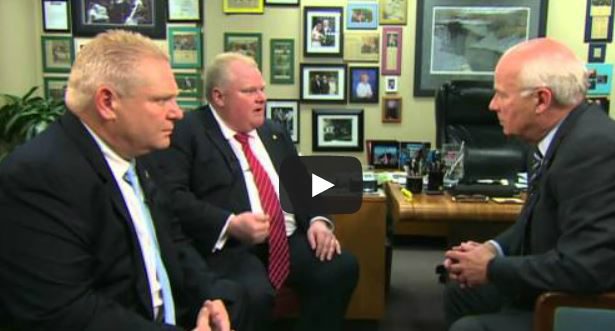 Peter Mansbridge and CBC’s The National faced sharp criticism about their interview with Toronto mayor Rob Ford, in which he fibbed and stretched the truth. Mansbridge, one of Canada’s top anchors, did not contest Ford’s assertions before they aired. But as the show’s executive producer Mark Harrison tells J-Source, there wasn’t enough time to fact check between shooting the interview and airing it.

Peter Mansbridge and CBC’s The National have faced sharp criticism of their interview with Toronto mayor Rob Ford, in which he fibbed and stretched the truth.

Mansbridge, one of Canada’s top anchors, did not contest Ford’s assertions before they aired, including boasts that he hadn’t missed a day of work, for example, and that voters elected him with the largest mandate in Canada’s history. But as subsequent stories by The National and other media outlets revealed, these statements were not true.

In a strongly worded critique of the interview, Canada.com said “it’s time for media to call out lying liars when they hear them lie.”

“It is not the responsibility of readers to pick apart the reported statements of their elected officials to find lies. That’s the job of media, and it’s time we started doing it,” William Wolfe-Wylie wrote for Canada.com.

But as the show’s executive producer Mark Harrison told J-Source, there wasn’t enough time to fact check between shooting the interview and airing it. According to the CBC’s programming policies, interviews should be diligently fact-checked, and if a person expresses an honest opinion, the CBC should ensure that opinion is grounded in fact. However, the policy does not state whether interviews should be vetted before or after they air.

The National interview took place just hours after Toronto City Council stripped the mayor of most of his powers and aired the same night:

The goal of the sit-down interview was to focus on Ford’s behaviour, not to contest his record Harrison said, adding the interview came together at the last minute.

“When the day started we didn’t know that the Ford interview would be a possibility,” Harrison said.

As the day wore on, council debated a motion to remove some of the mayor’s powers,  Ford and his brother engaged in a shouting match with people watching the meeting and Ford accidentally knocked over a councillor.

It was a pivotal day in the Ford saga, Harrison explained, and when the news team began setting up in the mayor’s office at 3:30 p.m. on Nov. 18, the interview still wasn’t confirmed.

After council voted overwhelmingly in favour of removing some of Ford’s powers, the mayor returned to his office and found the news team ready for an interview. “It certainly seemed that he didn’t know that we were going to be there,” Harrison said.

Ford left for a staff meeting but finally sat down for the interview around 7 p.m. The 18-minute interview aired on CBC just two hours later.

There wasn’t time to put together a thorough Reality Check segment that evening, Harrison explained, but as soon as the interview ended, the decision was made to run a fact-check the following night:

“When it comes to fact checking, we take that super seriously,” he said.

J-Source also requested an interview with Mansbridge but he was unavailable to comment, as was CBC ombudsman Esther Enkin.

When it comes to fact checking, journalists don’t check what politicians say often enough, said University of King’s College ethics professor David Swick. But in The National’s case, he doesn’t think there was any problem with airing a fact-check segment the following evening.

Swick was impressed The National managed to air an in-depth fact-check the next night. Most people watch newscasts regularly, and stories are often presented in serial, he said, so viewers were likely to catch it.

His bigger concern was the anchor’s approach. “I thought Peter Mansbridge was really soft on the Ford brothers,” he said. “So little came out of it that was revealing.”

Wolfe-Wylie and Swick said Mansbridge could have asked more questions about the criminal case. After Mansbridge asked the mayor about his former driver Alexander Lisi and the police investigation, Ford rebuffed him, saying the matter was before the courts. Instead of pressing for more details, “Mansbridge went back to soft questions about Toronto’s reputation,” the Canada.com editor wrote.

The National knew from Ford’s previous interviews that he would resort to a “smoke screen” about his record, Harrison said. But he said that if Mansbridge had attacked the mayor’s assertions directly, Ford likely would have become defensive and the interview would not have revealed as much as it did about the mayor’s state of mind.

David Studer, director of journalistic standards and practices at CBC, agreed with Harrison. If Mansbridge had stopped to address each fib, the interview would have gone off the rails, Studer said.

“There’s an obligation for us to get things right when we’re reporting them. I’m not sure it’s our obligation in every single instance to intrude on a story and obsessively footnote,” Studer said.