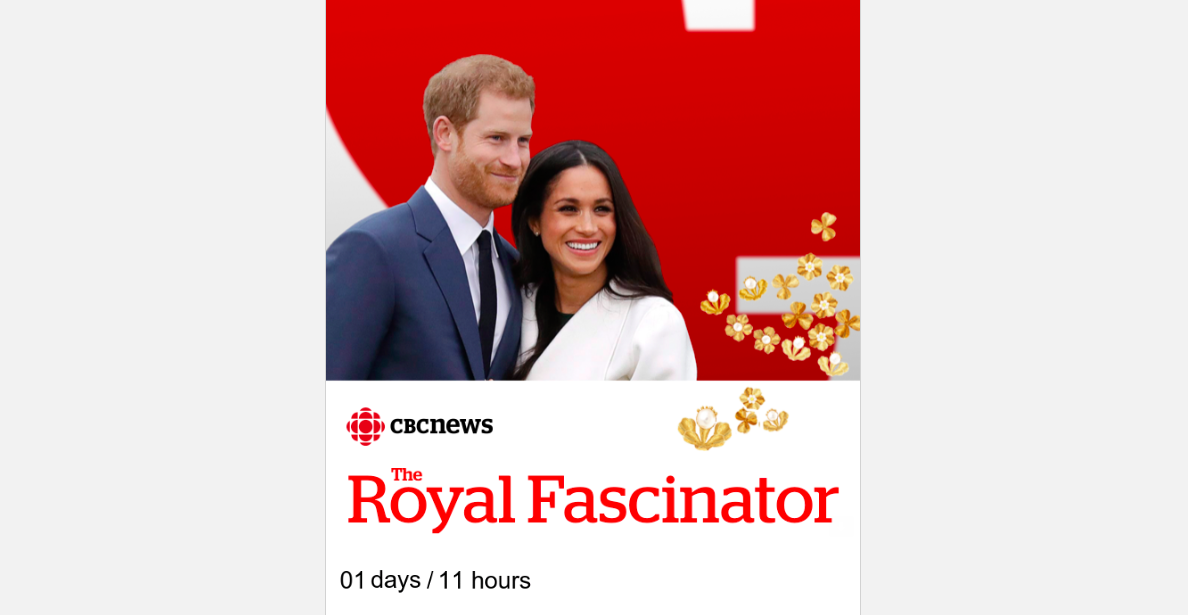 CBC's The Royal Fascinator is a limited-run newsletter examining the royal wedding from all angles. Screenshot by J-Source.
NewsInnovation

The newsletter, launched eight weeks before the royal wedding, takes readers inside the event.

Are you dying to know who made the royal wedding guest list? The readers of CBC’s The Royal Fascinator sure were.

In a recent edition of the limited-run royal wedding-themed newsletter, writer and royal expert Janet Davison took on reader questions, including whether Fergie — aka Sarah, Duchess of York — would be at the ceremony. (Davison’s answer: Fergie will probably be there even though she wasn’t at William and Kate’s wedding — but she might not be at the evening reception.)

You only have two more days to sign up for The Royal Fascinator — because after that, it’s gone. Timed to begin exactly eight weeks before the wedding of Prince Harry to Meghan Markle, the limited engagement newsletter has released issues with increasing frequency as the big day approaches, covering topics from where the couple will get married to the cultural significance of royal wedding dresses.

“(We) organized them I think in a way that is very logical and recognizable to anyone who has any interest in the royals or weddings,” said Megan Griffith-Greene, a social producer on CBC’s social team who works on the newsletter. Together with Davison, executive producer Spencer Walsh and product manager Kate Stewart, they created the product as part of CBC’s expansive Royal Wedding coverage.

It was also an opportunity to experiment with the newsletter form. While CBC has several long-running newsletters, the Royal Fascinator has an expiration date.

While the Royal Fascinator is promoted in CBC News stories about the wedding and across the network, Griffith-Greene said that a key tool has actually been word of mouth. “When I shared it on my Facebook feed, one of the most remarkable and maybe one of the most surprising things about this … is that people didn’t just share it they also tagged all their friends who really love royal stuff.”

Part of that response she believes is because of the work of Davison. “She is a remarkable writer and she has also poured so much love and research into this remarkable project,” Griffith-Greene said. “People really respond to that.”

But they’ve also tapped into a community of people who are fascinated by the Royal Wedding — even if that’s not something they’d admit in public. “There are a lot of people who secretly love this and really want to have that connection with things,” said Griffith-Greene. She views the newsletter as a service, not a product, which means they have made a significant effort to involve readers in the discussion by answering questions and responding to reader feedback.

With the wedding less than 24 hours away, the Royal Fascinator will be winding down. The last email will be sent on Sunday to wrap up the series. Griffith-Greene said she thinks there is only a limited window for interest in this event. However, while CBC has no firm plans for another royal themed newsletter, they are providing an opt in if readers want to hear more about the royals.

However, the CBC has already launched another limited-run newsletter: The Campaigner, where writer Haydn Watters will look at the Ontario election campaign.

Griffith-Greene notes that the CBC’s experience with The Royal Fascinator shows how effective a short-term newsletter can be. “I think that what is really wonderful to see is how a project like this can create a really deep relationship with an audience who are really committed to a particular story,” she said.