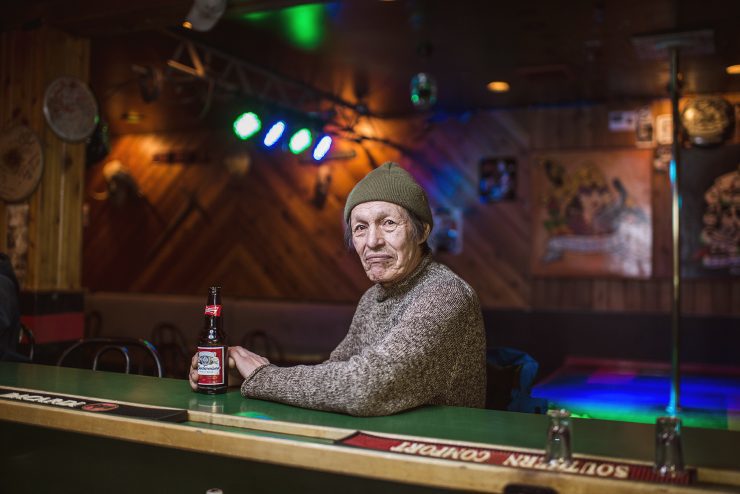 Chronicling the diversity of Yellowknife, one profile at a time

This online series from Edge YK magazine proves that, even in a small city of 20,000, there is no shortage of characters with fascinating stories to tell.

Reporter Mark Rendell was on the highway driving out of town—Yellowknife in his rearview mirror, snowy open land out in front—with his tape recording was capturing his favourite thing: stories from an interesting person. In this case it was Buddy “The Prospector” Mercredi, a 67-year-old “grand old bush guy” and profile subject “Yellowknifers,” a weekly series for Edge Online, the web sibling of Yellowknife’s hyperlocal Edge YK magazine.

Mercredi, who has been on the land staking claims since 1967, loves Yellowknife for its prospecting opportunities—and dislikes it for its growth and its government sector. “It’s more like a little Ottawa,” he said.

For Rendell, Mercredi is exactly the kind of person who makes the series so much fun for readers and for its writer. “You get an interesting guy like Buddy talking and I could just sit there and listen to him for days,” he said.

There’s nothing structurally fancy about the profiles in “Yellowknifers.” It’s a profile—an intro zone followed by a Q & A—that doesn’t set out to be a “city love-up.” Still, every Monday it would be tough for a reader not to come away from one of its instalments feeling good about the person being profiled, the city of 20,000 he or she comes from and how the two of them fit together.

For a new arrival like Rendell, who only came to town from the south a year ago, this has a pleasurably educational element. “If you read the series, you know that Yellowknife has shockingly high rents, shockingly cold winters and lot of really bad things,” said Rendell.

“But you also come away with the sense that there is a crazy sense of community in this town. Most people I talk to say that it’s pretty unique and a great place to live.”

When Edge YK’s new online editor, Matthew Mallon, joined the team, he wanted a weekly series that would offer readers some consistency. The magazine’s bi-monthly print edition is still the brand’s flagship, but the goal is to grow both its online content and readership. What better way to do that than with a series that plays off some of the town’s strengths—its size and its cast of characters? “It’s a tight-knit community,” said Rendell. “Nothing is anonymous. You’re always going to be recognizing everybody.” Since its launch in January, the series has set out to introduce readers to the faces they’re always seeing around town.

When three or four members of the editorial staff sit down to collaboratively select a profile subject, it might be a neat person one of them has met at a party. A friend of a friend. Or, it might be a person they’ve seen around town who they’d really like everyone to collectively meet.

For instance, Rendell’s editor called over to him the other day: “Hey, there’s a guy riding around town on a bike wearing turquoise. We don’t really know who he is, but he’s a flamboyantly dressed guy whose thing is turquoise. He might be one of Yellowknife’s snappiest dressers.”

But the at-random nature of profile choice doesn’t mean the team doesn’t have a more serious goal, too. “The news can skip communities,” Rendell says. “Yellowknifers” allows subjects to tell stories from communities that aren’t receiving enough coverage. They’ll make sure to keep the mix diverse: men, women, white, Dene, young professionals, suburbanites, artists and more. “Yellowknife is tiny, but it’s a crazy-diverse place,” he said. “We try as best as we can to reflect this week to week.”

Almost all of Rendell’s interviews happen face-to-face: at a park, in a coffee shop, at people’s homes. In many cases, Rendell finds he could listen to his subject for days, but he normally spends an hour or less with each of them. His Q & A questions do provide the conversations with some structure, but the interviews still tend to be loose and enjoyable for both of them.

“I don’t go into an interview trying to get people to talk about how great Yellowknife is,” he said. “I get excited when they slag off Yellowknife because it’s something different.”

The interview’s location is often driven by the needs of the series photographer, Angela Gzowski. For instance, the reason for the road trip with Mercredi, the Prospector, was because she wanted to capture him standing out on the snow. Although she eventually settled on a photo of him in a bar, her images amplify Rendell’s writing and the subject’s own words. “Just as much can be told in a great portrait,” Rendell said.

Six months into the series, Rendell has grown to enjoy the Q & A format. It’s recognizable to readers and each question serves a function. Typical questions include “What are your earliest memories of Yellowknife?” or “What do you do in the winters?” When he sits down to write the piece (usually on Sundays for his Monday deadline) he kicks it off with a 500-word narrative that sets up the interview. The one grumbly element about the project: the transcribing.

A few of Rendell’s favourite profiles so far? “The Bush Man” Larry Galt, who lives in a plywood shack, rides a motorcycle and loves living near Great Slave Lake. “You couldn’t hire a better scriptwriter. His quips are quite incredible. The way he built a natural arc into his story.” There’s also “The Artist” Germaine Arnaktauyok, a much-acclaimed Inuit painter who grew up on the land as a child but now enjoys Yellowknife’s friendliness and that she can walk to everything that she needs.

And then there’s “The Street Performer,” Gilles Amyot, a puppeteer and actor who once toured with Cirque de Soleil. Rendell first met him while he was working on a series about homelessness. “I’d wanted to hear his story for a while,” Rendell said. “Yellowknifers” gave him a reason to reach out to him.

The feedback from readers has been great, Rendell said. The weekly stories are some of their better-read pieces. They’re enjoyed and shared. Although Rendell and Gzowski are content with the words-and-picture approach right now, multimedia elements may come later. And overall, the series has no horizon. “I don’t think we’re going to run out of interesting people any time soon,” he said.