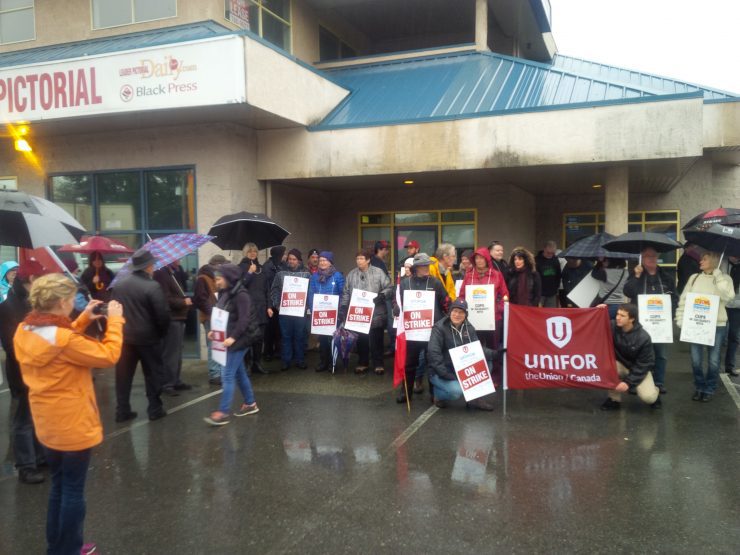 Black Press says the newspaper may close if a deal is not reached.

There’s no end in sight for striking community newspaper workers at the Cowichan News Leader Pictorial in Duncan, B.C., fighting against what the union calls a “two-tiered” workplace.

Work-to-rule was instituted in late November, and after a strike vote passed with 100 per cent support, workers walked off the job Dec. 1.

In a proposed collective bargaining agreement, the company wanted to eliminate the existing wage structure’s top tier for new hires, meaning future employees would make $1 less per hour than the $21.90 a reporter currently earns after four years, McQuade said.

“We’ve had a stumbling block over this two-tier issue. We told the employer if they get this two-tier (structure) off the table then there’s a good chance we can reach an agreement. But they refused to take it off the table,” McQuade said.

The company said it wanted to eliminate the top tier because wages were higher at the newspaper than they were for other unionized employees in the same market, said Randy Blair, president of the Lower Mainland and Vancouver Island divisions of Black Press, who agreed the two sides “are at an impasse.”

While the company had hoped to secure a new contract, there’s “a high probability” the News Leader Pictorial, which was already struggling financially, will close if an agreement can’t be reached, Blair said.

“It’s making an already difficult situation even more difficult. The longer this strike goes on, it may become an impossible situation. Time will tell,” he said.

On Dec. 17, Black Press announced it had purchased several B.C. newspapers from Glacier Media, including local competitor the Cowichan Valley Citizen, and would take over operations in March. McQuade said he is doubtful there will be any progress with labour negotiations until Black Press decides if it will continue operating both papers. Staff worry the company plans to shut down the News Leader Pictorial in the spring.

Both local papers are free. The News Leader Pictorial was published on Wednesdays and Fridays until the strike, with a circulation of over 20,000, said local union president Mike Bocking. Since the strike, management has put out the paper once a week (B.C. has “anti-scab” legislation preventing the company from bringing in replacement workers).

Community activist Parker Jefferson said having only one local newspaper is detrimental to community engagement. His organization, One Cowichan, has an email list of 4,000 people through which he often includes links to local news stories. Jefferson credits the small but active local media for increasing awareness of causes like environmental stewardship championed by his group.

“We think it’s really important to get the community aware of what’s going on, and there’s hardly any other place to find that out,” said Jefferson, who wasn’t aware the News Leader Pictorial was still publishing because his local newspaper box has been empty for weeks.

“The more reporters there are and the more people there are working in a competitive capacity, the better it clearly is for the community.”

“One hopes we can come to a resolution at some point, but the issue is a difficult one,” Bocking said. “These people, who range in ages, are actually not even fighting for themselves. They’re fighting for future employees of the Cowichan Valley newspaper.”