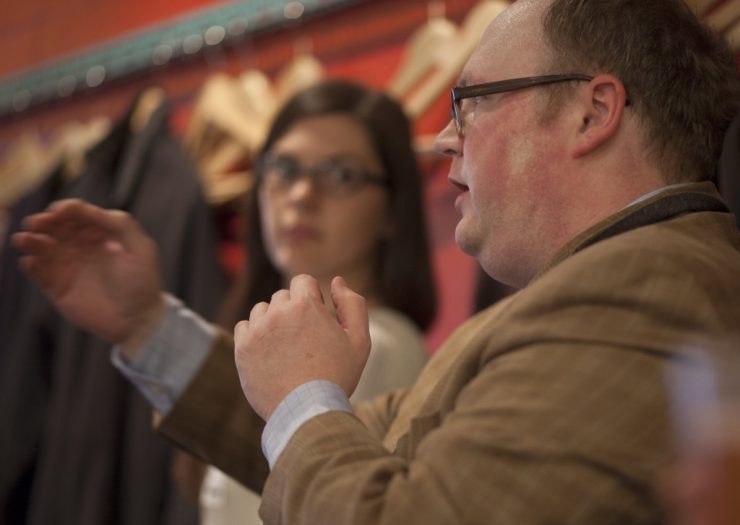 Labour stories are getting lost. At least, that’s what research for the recently launched Media Works: A Labour Rights and Reporting Project has discovered.

Labour stories are getting lost. At least, that’s what research for the recently launched Media Works: A Labour Rights and Reporting Project has discovered. At a time when people in Canada are spending more hours than ever traveling to, thinking about, and simply being at work, this is concerning. As handbook co-writer Haseena Manek said, “It’s not that labour issues are disappearing, but in the Canadian media landscape, labour stories are disappearing.”

CWA Canada Organizer Katherine Lapointe explained, “We’re in a period where the nature of work is shifting and becoming more precarious, existing labour and employment laws no longer protect most workers, and union density is declining. We need labour reporting that critically investigates the impacts of these shifts on our society, and that explores how workers are finding new ways to collectively organize to improve their work and home lives.”

The Media Works project has two components: fourteen labour reporting audio documentaries, long-form articles and graphic journalism pieces, and a handbook that aims to inform media workers of their rights and to encourage and improve labour reporting.

At the Media Works launch, which took place in Toronto on April 29th as part of the Mayworks Festival, all the elements of the project were on display and five contributors took part in a round table discussion. Moderator Sharmeen Khan opened by reflecting on her own experience working in the media for low or no pay. “With changes to the economy, many times the narrative is this is just the way it is,” she said. “I think projects like this, like a handbook, really break through that narrative.”

Manek, one of the panelists, explained what Media Works is all about. The first section of the handbook helps the reader identify what type of media worker they are; be it freelancer, employee, intern, or volunteer, as well as what rights exist for those categories of workers.

The second section acts as a guide to labour reporting. This includes a brief timeline of labour history in Canada, strategies for writing about labour effectively, and advice from prominent labour reporters in the U.S. and Canada.

In his radio documentary, panelist Arman Aghbali explored labour issues affecting start-ups, in particular the lack of gender diversity in the workplace. He also highlighted that while 70% of start-ups fail within 10 years, government and universities still showcase these companies “front and center”, and encourage students to take on the high risk of starting their own business.

Sara Tatelman, another contributor to the project, explored in her piece the role that journalism schools play in promoting unpaid internships. In many programs in both Canada and the U.S., students today are paying tuition to work for free as graduation requirements.

Tatelman argues that at minimum, schools should offer a fair exchange. As she said at the launch, “it’s one thing to pay $500 to learn microbiology from an eminent professor, but it’s quite another thing to pay $500 and get sent a link to a job board and be told, ‘go forth young warrior!’ and figure out who wants to hire you.”

Errol Salamon, a PhD student from McGill University, wrote about digital copyright demands and rights-grabbing contracts instituted by many big media companies. He explained that under such contracts, freelancers are compelled to “waive their moral rights, and grant their employers all rights, across all languages, all platforms, for eternity.”

Salamon further explained how freelancers, working with organizations like the Canadian Media Guild and the Association des journalistes independants du Quebec, have been collectively organizing to oppose these contracts and have won significant victories.

Maggie Reid, a PhD student at Ryerson University, examined community media and how experience in this area may (or may not) lead to paid work in journalism. This link is important not only for prospective media workers, but for the way it shapes what content we consume.

As Reid explained, “many community media organizations have anti-oppressive practices, they privilege content and voices that are often not heard by mainstream media. So, if there’s not a link between community media and paid journalism work, then what does that mean for those stories?”

As the media landscape changes, it is more important than ever to inform workers of their rights. As Khan explained, “Our success will be based on these handbooks, on education, and collaboration, but our success will also be based on solidarity as we link our struggles with other precarious, exploited workers in our communities and across Canada.”

Media Works is a collaboration between CWA Canada Associate Members, the National Campus and Community Radio Association, and the Canadian University Press.

The handbook and the labour reporting pieces can be found online at www.media-works.org.

Emily Katz is a freelance writer based in Toronto and a CWA Canada Associate Member.

This article originally appeared on TheStoryBoard.ca, and is reprinted here with permission.