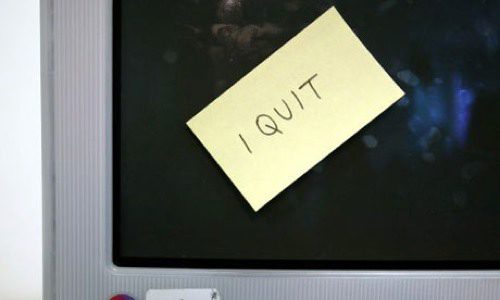 Well, by now we all know why Kai Nagata quit. And although Nagata’s critique lacked the elegance (and brevity) of Edward R. Murrow’s 1958 RTNDA speech, it was a cut above Adam Smith’s drunken YouTube resignation.

In a field where the first instinct is ‘write about it,’ Nagata isn’t the first journalist to go out with pen blazing. The Arizona Republic’s Kat Greene put her resignation statement on Facebook, asking: “If this road leads nowhere, why am I on it?”  Huff Post columnist Mayhill Flower published her final email exchange with her editor. A Norwegian broadcaster fulfilled everyone’s fantasy by quitting on air, mid-newscast. Yet few have surpassed the Richard Peppiatt’s public send-off to “gormless” journalism and “budgets thinner than…employee-issue loo roll” at the Daily Star. Indeed, journalists undertake their ‘I quit’ letters with greater writerly aplomb than most; Slate has compiled the best.

Meanwhile, veteran journalist Carl Bernstein wishes more journalists would quit – quit whining, that is. But perhaps it’s a good thing the job can still drive us to distraction. It’s evidence the instinct for ethical practice remains strong among working journalists. While some may criticize Nagata, we should remember there were other resignation letters written this week, for far less noble reasons.