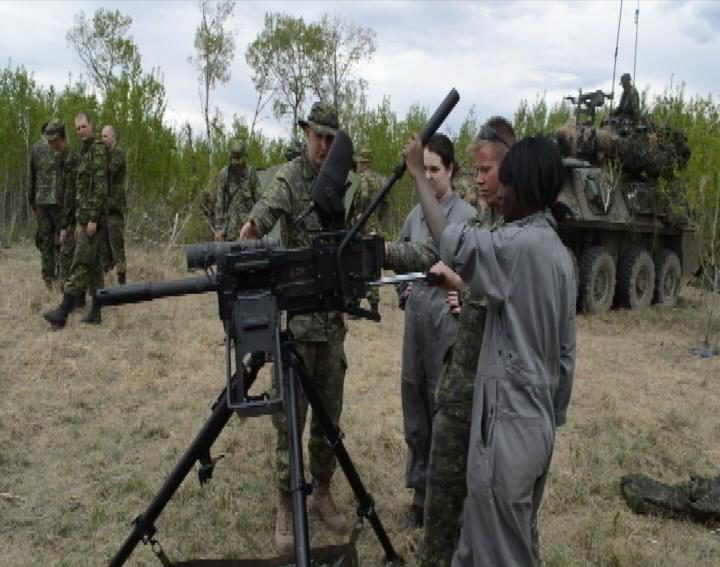 The military is a complex institution with hierarchies and rules that place it in a world of its own. But as Lola Fakinlede found out, there’s somewhere certain aspiring journalists can go to learn first-hand about how to cover the military. She gives insight on her experience of spending nine days embedded in the Canadian Military Journalism Course in Alberta, learning from experienced journalists and army veterans.

The real stories come from soldiers who go to the frontline – and, the only way to get those stories is to talk to the soldiers.

That’s what I learned on a recent course I took — designed to train journalists on how to cover the military. It’s called the Canadian Military Journalism Course and is organized by the University of Calgary’s Centre for Military and Strategic Studies (CMSS), funded by the Canadian Defence and Foreign Affairs Institute (CDFAI) and run annually in Alberta by former journalist Bob Bergen.

Bergen developed the course 11 years ago based on the knowledge and resources he had gathered from more than 25 years of covering the military. The goal of the course is not to teach students everything about the military, Bergen said. Rather, he wants to help budding journalists learn how to learn about it.

“There are things I know now that I didn't know when I was starting,” said Bergen. “If I can jump start the process and teach young journalists the things that took me 25 years to learn in less than a week that would be a good thing.”

The military is a complex institution.

Its hierarchies and rules place it in a world of its own.

Military personnel are only allowed to speak strictly on their area of expertise. One often has to know exactly who to ask questions to in order to avoid stonewalls. They even have their own language, which to an untrained ear sounds like gibberish – for example meathead (military police), rats (rations) or hut slut (a barracks non-commissioned officer responsible for allocating rooms.)

What does it mean for a force to “cover-security” or to “follow and assume?”

These were terms that were completely foreign to me — until recently.

This year, I was among 12 lucky journalism students from universities across the country to win scholarships to take the CMSS course in May. For nine days we were given uncommon access to the military — to learn how it works and to ask any questions we liked.

We spent the first few days in class, learning about military legislation. We reviewed the Queen’s Regulations and Orders, which is arguably the most important document of the military. It guides officers in all aspects of their job — from what they can say in public, right down to who is allowed to wear a beard.

Bergen handed us 53 megabytes of information that contained things such as how to invoke the Access to Information Act (AIA) when you can’t get information through regular means. He gave us a guide on how to fill out an AIA request form,  a tree that shows what channels your request goes through, a section on costs and fees,  estimates on how long it should take and a detailed step by step guide through the process.

We also received guidelines on reporting in dangerous situations — such as “when to blend in and when to be clearly identified as a journalist in a combat zone.” We were given rules of war — such as how journalists become prisoners of war. Bergen put together more than 50 pages of military jargon with their respective definitions — such as who a cockswain is (“the senior non-commissioned member of a ship”) — and so much more.

Colgan described the bureaucracy within the military as “overwhelming.”

Last year, he also had the once-in-a-lifetime opportunity to take the CMSS course while he was an MA student at the University of Western Ontario. Colgan said that the training and information he received from the course has helped him deal with that bureaucracy on a number of occasions — including referencing some of the course materials for stories.

On our third day, we visited a reserve armoury in Calgary where we got to apply some of the things we were learning, such as being able to tell officers’ ranks by the stripes on their uniform.

I got a lot of the ranks wrong that day. It would take me a few more tries to start getting it right. On a deadline I would not have that luxury. There, we got lots of opportunities to practice.

We also had guests come to our classroom to speak to us.

Michael Hornburg, the father of fallen soldier Nathan Hornburg, spoke about losing his son and his experience dealing with the media. Reservist master seaman Daphne ter Kuile talked about serving in Afghanistan and her impressions of embedded journalists. These personal accounts brought home the sensitivity and responsibility of covering war.

We watched documentaries that sparked debates over compromises journalists have had to make to gain access to information. For operational security reasons, the military often dictates the terms under which journalists must work. Gaining access and still maintaining journalistic integrity and objectivity can sometimes be challenging.

And thus, armed with a lot of new knowledge and a little bit of practice, on our fourth day, we boarded a bus for a four hour trip to the Canadian Forces Base in Wainwright — to watch soldiers prepare for a training exercise.

Between the excitement of shooting guns, driving in tanks, eating pre-packed lunches, investigating the insides of coyotes and leopards — armoured vehicles not animals — and visiting the messes, we were learning how the military operates.

“The course took advantage of all the senses — whether smelling the sometimes gross, sometimes really surprisingly good rations, or hearing a commander barking orders to his privates and corporals,” said Michael Robinson, a fellow student on the course.

It felt good to talk confidently to a loader about sabots (ammunition) on a Leopard II A4M. By now I knew what his job entailed and what questions he could answer and which ones to direct at a gunner or crew commander.

Our questions were getting more intelligent and specific. We were conversing with soldiers in their special tongue.

I spent hours watching the soldiers work on their tanks and eat their hard (Individual Meal Packets or IMP) lunches. They showed me where they slept — in little tents, four soldiers to one. I watched them pass the time exchanging stories and playing strategy games. Being able to see the human faces behind the uniform, being able to talk to them like regular people, being able to see them start losing the suspicion in their eyes and really start talking candidly to me — that was incredible.

And if you don’t know the military, how can you effectively cover it?

Then as quickly as we arrived it was time to leave.

By now I was running on information overload, but we weren’t done yet.

Back in Calgary, we still had to learn about our veterans.

We still had long conversations about embedded journalism and the dangers of war correspondence — such as dealing with PTSD, getting injured and even dying at the frontlines. Covering war can be a noble task. It can be exciting. It can be surprising. It can be dangerous with really grave consequences.

I learnt that while it can be a rewarding job, it is a very serious job.

It is not something that should be entered into lightly or uninformed.

It was a lot to take in and the last few days were filled with numerous pregnant pauses and a lot of staring into space.

The biggest drawback to the course for me was time — not enough of it.

On our last night in Calgary, I was talking to another course-mate David Meffe and I had my camera running.

“Any final words?” I asked.

He looked straight at the camera. For a few moments he was silent.

And then he said, “I wish I could do it again.”

He took the words right out of my mouth.

Lola Fakinlede has an MA in journalism from the University of Western Ontario. She is currently the communications coordinator for a charity. In 2010, she worked in Nigeria for Channels Television.