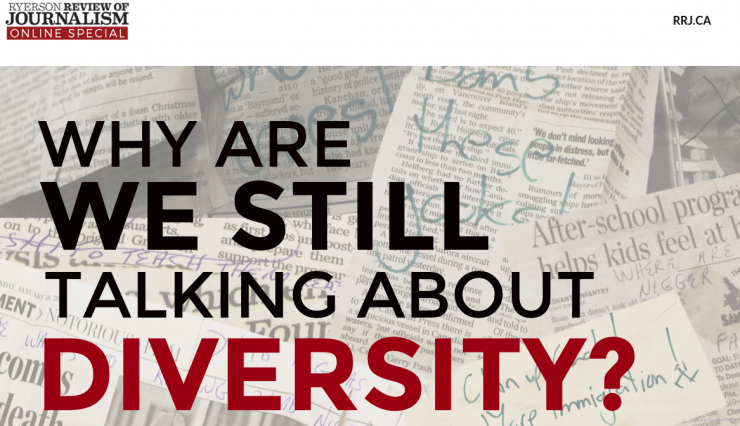 Inside the Ryerson Review of Journalism’s #WhyDiversity

We talk about “diversity” a lot but rarely do we understand or directly address the personal turmoil or long-lasting impact it has on the people and communities the term defines.

In December, I was trolled by a journalist who claimed I was a “fake Saudi Pakistani Blog Editor” in regards to a story—that I did not write—about the whiteness of Canada’s columnists. I watched as a screenshot of my Twitter page was retweeted almost 70 times. I remember deleting my bio entirely, erasing from it any clear indication of my identity.

We talk about “diversity” a lot—the lack of it in the industry and problems linked to it—but rarely do we understand or directly address the personal turmoil or long-lasting impact it has on the people and communities the term defines. Instances like mine instigate personal struggles, big or small, that create innate barriers preventing the construction of a more accepting professional culture. I, for instance, have accepted that there are more trolls in my future, no matter what I write about.

That’s the conversation I had with the masthead the next day, and the result was Ryerson Review of Journalism’s first online, interactive feature, #WhyDiversity. It is in-depth interactive discussion about the problems with diversity in the journalism industry—the long-standing excuses for the lack of change, the failures of the style guides we use for reporting on non-white communities and the hate mail that has become an unwritten tradition for reporters of diverse issues or backgrounds.

In an editorial, Review editor Kat Eschner called out the absurdity of my troll: “…by singling out one of the visibly non-white people on the masthead, he is demonstrating the importance of the subjects we write about,” she wrote. “If this incident has taught us anything, it’s that we need to keep writing.”

And that’s what we did. In the online special and in our Spring 2016 issue you will find a nuanced conversation about the successes and failures of diversity coverage and the inclusion and exclusion of diversity in the newsroom. We don’t like the term “diversity”—it’s become a meaningless label, a cop-out, overused and undervalued—but we have embraced all its connotations to highlight that something’s got to change, even if it’s just the conversation.

This is not about a quick fix. This will take time. That’s why we’re still talking about diversity.

Read #WhyDiversity on the Ryerson Review of Journalism website.