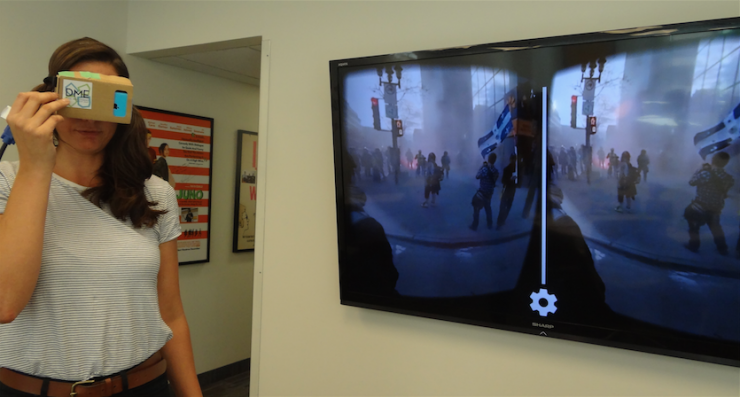 Canadian Press photo editor Marie-Espérance Cerda was in the midst of this year’s violent May Day protests in Montreal and her virtual reality coverage of the event allows audiences to share in the experience.

Cerda’s experiment in virtual reality journalism plunges the user into a three-dimensional world, entirely filling the user’s field of view with 360 degrees of video that shifts with the gaze of the viewer. Her project also pairs this video with real-time audio from the scene, completing the immersive experience.

[[{“fid”:”4706″,”view_mode”:”default”,”fields”:{“format”:”default”,”field_file_image_alt_text[und][0][value]”:””,”field_file_image_title_text[und][0][value]”:””},”type”:”media”,”link_text”:null,”attributes”:{“height”:448,”width”:835,”style”:”width: 500px; height: 268px; float: right;”,”class”:”media-element file-default”}}]]“With virtual reality you are no longer representing reality or an event, you are recreating an experience. You are trying to get someone to feel something,” said Cerda, who produced the immersive journalism experiment as the major project for her master’s in media production degree at Ryerson University.

Gene Allen, a professor at the Ryerson School of Journalism and the supervisor of Cerda’s work, praised the innovative nature of the project: “[It] allows viewers to focus on any aspect of the unfolding action, just as if they were there.

“You can look in one direction—with the images filling your whole visual field—and see the cops approaching, beating shields with their batons, then turn around and see the protesters cursing and throwing water bombs, then turn 90 degrees to see a group that broke off and ran up McGill College Avenue, then back to the cops—or wherever you like.”

Cerda said her interest in technology and its function in journalism led her to explore the relatively new concept of virtual reality as a journalistic medium. She is not, however, the first to experiment with the tools. American journalist Nonny de la Peña, “the godmother of virtual reality,” pioneered the use of immersive technology in reporting. Her latest piece, Project Syria, commissioned by the World Economic Forum, simulates the bombing of a Syrian refugee camp. Each element of the film is drawn from real audio, video and photographs taken on scene.

Similarly, The Wall Street Journal took its readers on a roller coaster ride of the NASDAQ, while VICE News asked, “what if, instead of watching a news broadcast about the latest protest, you could walk into it?” when it created VICE News VR: Millions March. It places the viewer in the midst of 60,000 protesters on the streets of New York City.

“I saw huge potential. I wanted to do the same thing and see what the implications of that would be,” Cerda said.