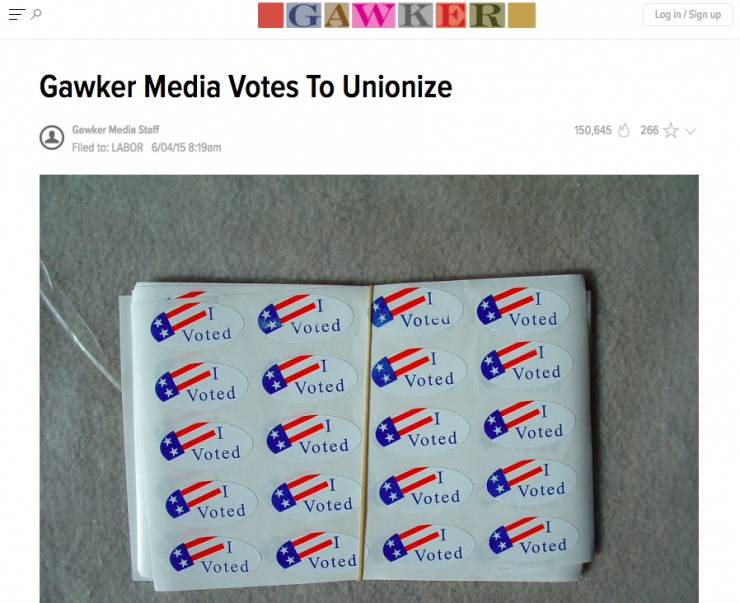 The convention, held at Nelligan Hall and the Carl Braden Memorial Center, drew about 30 people from the United States, Canada, Australia and Israel to discuss media workers’ rights.

The convention was organized in the midst of an unprecedented wave of unionization among digital journalists in the U.S. Between June and September 2015, editorial employees at six digital media companies voted to join unions.

The unionization drive continues, as Huffington Post employees are currently organizing. Digital media workers have reportedly sought collective representation to secure ongoing legal protection and improve their working conditions so that they can continue creating high-quality and independent journalism.

Some participants came to Louisville to address how unionizing could improve journalism as a democratic institution and practice. Jenn Peat, eastern region organizing director of the Screen Actors Guild-American Federation of Television and Radio Artists, emphasized that her members, which include news writers and broadcast journalists, have unionized because they want “a voice.”

They believe journalism is central to democracy and that unionizing can help them “be accountable to the community,” Peat said. She explained that unionization drives are “aspirational,” becoming “spaces where journalists can talk about these things.”

Last summer’s organizing wave also compelled non-unionized digital media workers to meet in Louisville to discuss how unionizing could improve working conditions at their companies. One convention participant, a digital journalist who asked to remain anonymous, echoed Peat’s comments, affirming that unionizing can give workers a voice.

They were inspired by the ideas that Gawker employees publicly conveyed about unions during their organizing drive. “The union is us and we’re the ones who decide what we want in our contract,” the conference participant asserted. Nevertheless, some of their co-workers have been skeptical about unionizing: “The things they’re worried about are mostly holdovers from more traditional media outlets, so just being able to say, ‘We don’t get stuck with the newspaper contract, we get to make our own’ is very helpful for us.”

Some digital media workers in attendance said that they hoped to bring home effective organizing strategies. “Media is a global industry,” explained Nicholas McCallum, a Yahoo7 News reporter in Australia. “So there’s no reason why we can’t share the same skills if we’re all sharing the same content.”

Sara Steffens, secretary-treasurer of the Communications Workers of America, also mentioned an emerging concern: refusing restrictive “social media policies” that allow management to control journalists’ personal use of social media platforms and content they post even outside of working hours.

Louisville was an ideal place to hold the convention and build an “alt-labour” movement for media workers, explained co-organizer and labour reporter Mike Elk. The city has a long-overlooked history of militant labour and civil rights activism, a legacy from which digital media workers today could learn, he said.

During the 1950s, Carl and Anne Braden, two white Louisville Courier-Journal reporters, were at the centre of organizing social movement campaigns in the city. The paper eventually fired them for their activism. Convention presenter Cate Fosl, associate professor and director of the Anne Braden Institute for Social Justice Research at the University of Louisville, explained how the Bradens devoted their careers to civil rights organizing and used journalism to further their cause. Anne Braden also embraced anti-homophobia and social movement organizing as a local and community-wide effort. The Bradens ultimately used their overlapping axes of privilege—class, race and sexual orientation—to the benefit of oppressed groups, a lesson convention organizers hope journalists will take back to their communities.

Today, the intersection between labour activism, class, race and gender is pronounced in advocacy campaigns to reform the media system in the United States. Joseph Torres, senior external affairs director of the lobbying organization Free Press and co-author of News for All the People: The Epic Story of Race and the American Media, highlighted the importance of “intersectionality” to reforming media structures.

He explained that in order to combat the lack of racial diversity in newsrooms, we must consider the representation of diverse groups in not only media workplaces but also media ownership. “When it comes to media, it’s so concentrated and there’s so much consolidation,” Torres said. “Meanwhile, people of colour and women own very few broadcast stations, cable networks and radio stations. If you address that issue, you actually address the whole structure of consolidation on its own. You have to refute it to create more opportunity for those who have been left out.”

A long-term goal resulting from the Louisville Convention is eventually to build regional media worker centres across the United States. Elk envisions these centres as membership clubs and co-working spaces with a coffee shop and bar area that could bring media workers and organizers together offline to share resources.