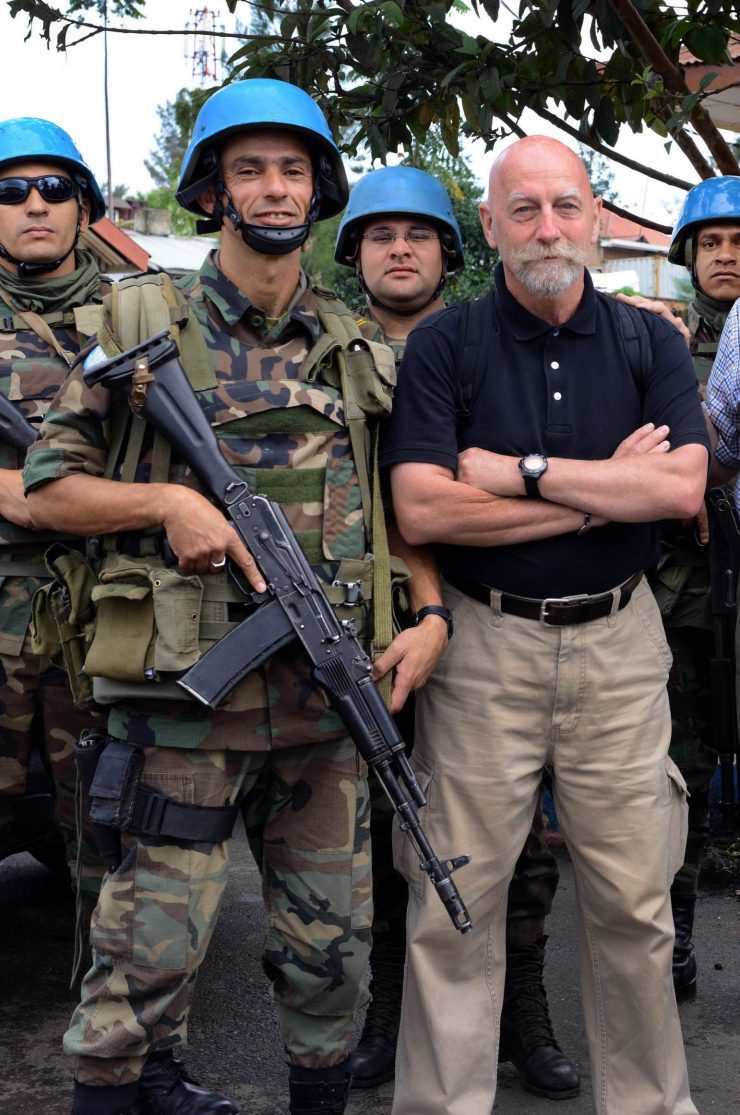 There’s not a lot photojournalist Peter Bregg hasn’t seen or done over the past half century. Shooting for the Canadian Press, Maclean’s, the PMO and various NGOs, he’s travelled the globe and won numerous awards. In June, Bregg will be the first photojournalist ever honoured with the Lifetime Achievement Award by the Canadian Journalism Foundation. Bregg recently chatted with J-Source about why this award is different and his sartorial tastes.

There’s not a lot photojournalist Peter Bregg hasn’t seen or done over the past half century. Shooting for the Canadian Press, Maclean’s, the PMO and various NGOs, he’s travelled the globe and won numerous awards, including a World Press Photo Award, Canadian Press Photo of the Year, a National Newspaper Award and White House News Photographers Association Awards. In June, Bregg will be the first photojournalist ever honoured with the Lifetime Achievement Award at the 17th Annual Canadian Journalism Foundation Awards. Bregg recently chatted with J-Source about why this award is different and his sartorial tastes.

Peter Bregg in Rwanda. All photos courtesy of Peter Bregg.

J-Source: Congrats on the Lifetime Achievement Award from the Canadian Journalism Foundation! You’ve won numerous awards over your long career. What does this one mean to you?

Peter Bregg: Every other award I’ve ever won was usually for one picture. This is for a whole lifetime, so it means a lot more. When you take a picture, you’re proud of it for the moment and then when you enter it in a contest and it wins you figure that it’s better than the others or it was deemed better than the others. But when they come along and give you a lifetime achievement award, with so many people available for it, it’s a little bit daunting.

J-Source: When did you first take your own photographs?

PB: I got a job at the tender age of 17 as a copy boy with the Canadian Press in Ottawa. Shortly after, I got interested in photography, I bought a camera and a year later I had learned enough that CP was willing to give me a fulltime job as a photographer covering the Hill.

J-Source: So before then you had never taken photos as a kid?

PB: No. That was it. I bought a camera. I’m one of those lucky people who point the camera and something happens. Not the other way around—something happens and then you take a picture.

J-Source: So you started as a copy boy with CP in 1966. By 1969 you were a photographer and won a National Newspaper Award. How valuable was that early newsroom experience?

PB: As a copy boy I was taking pictures every day and every once in a while I would get something that was useful on the wire.

J-Source: So you were just taking photos on your own, like on your lunch breaks?

PB: Yes. I was curious. I had no idea that I would become a photographer. As you’re learning you make so mistakes and you get disillusioned and disappointed. But in January of 1967, I got a scoop for a front page picture on The Globe and Mail. Then in March of that year I got another scoop that got published on every front page in the country practically and a story about the fact that I had taken this picture of some Canadian soldiers wearing their new uniforms. The picture wasn’t very good. It also got published in Time. I think that was when I decided this is what I wanted to do.

Former Prime Minister Pierre Trudeau surveys the ceiling in a stadium in Vancouver in the early 1980's with Queen Elizabeth giving him a stare. Peter Bregg/CP©

J-Source: Can you describe your approach?

PB: Working for a wire service or newspaper, half of what you do is gotcha moments and reflexes. Something happens, you’ve got it because you’re quick on reading the situation, reading the moment, body language. You have instincts, a sixth sense. But the other half of the time I’ve been working for magazines where it’s mostly portraiture. The majority of what I did at Maclean’s, for instance, was portraits of authors, politicians, celebrities and not so much news. I always wore a suit and tie. From my days as a copy boy, because I was 17, but I looked 14, I wore a pinstriped suit so I looked older. It stuck with me. I worked for the Associated Press in Washington and we had a very relaxed crew. I was one of 10 photographers and about 10 photo editors and darkroom people, and I was the only one born north of Dixie. Everyone else had southern accents, some with cowboy boots and I came in wearing three-piece suits. My nickname was The Dude.

J-Source: You’re an educator now. How do you teach photojournalism?

PB: I’m a part-time instructor at Ryerson University. I teach introduction to photojournalism to journalists. These are reporters, people who are going to be working for radio or print and television, who want to learn some photo skills. The basics of photojournalism …spot news, general news, sports, feature, portraiture. The first week I send them out on a photo assignment to shoot anything that they want, just so I can see how they see through their camera. I make them turn their camera from auto to manual. And each week we have a topic, sports, or feature or spot news or portraiture. But we touch on portraiture a couple times because 70 per cent of what you see in a newspaper on a daily basis is portraiture, for local news especially. Reporters are expected to take pictures every once in a while. Some weeks, three four days in a row, I’ll see a story with a picture by the same person. And the photography is more than adequate. That’s expected now. Generally, newspapers send photographers to the big events, you know, like an earthquake in Haiti, they’ll send a couple reporters and a photographer. After a week or two, they turn down to one reporter, who does both. So photographers aren’t going to be phased out completely, but in some areas they’ll be very few. I think photographers are just going to have to learn how to write.

General Romeo Dallaire in Rwanda 2004 with skulls being prepared for a display in a memorial museum to commemorate the Genocide of 1994.

J-Source: What are some of the pitfalls you see aspiring photojournalists make?

PB: When I was at Maclean’s I always made time for young photographers who wanted to show me their pictures. They come knocking because they’re looking for work. But they’re also equally interested in what I think of their pictures. If you’re going to go to a news magazine, don’t bring a bunch of fashion pictures or pictures of cars. Know your market. That was one pitfall. Some of them start talking about money. How much can I get for this? How much can I get for that? I’d say if you worry more about the money than about how good your pictures are, you’re going to lose. Photographers nowadays have to be businessmen because so many are going to be freelancers, not staffers. Being a businessman is important. But be a photographer first.

J-Source: What are you proudest of?

PB: I enjoy taking pictures. For me, that’s not work. That’s what people do on vacation, take pictures. So I’m proud of the fact I’ve never worked a day in my life. But the past 12 years, this NGO stuff has been very rewarding for me. I’ve done work with documentary film crews, I did one on eye doctors where I went along as the still photographer. They paid my expenses and then I own the pictures and then I make pictures available to the NGO after the fact, so I’m helping a lot of people with my pictures. I think if you have a set of pictures like the ones I did for WaterCan, I think by now 100,000 people must have looked at those pictures. If only a couple of those people gave more money, or young students decided they wanted to get into volunteer work or perhaps get into research, if they motivated anyone to do anything positive, then I win.

This interview was edited and condensed.