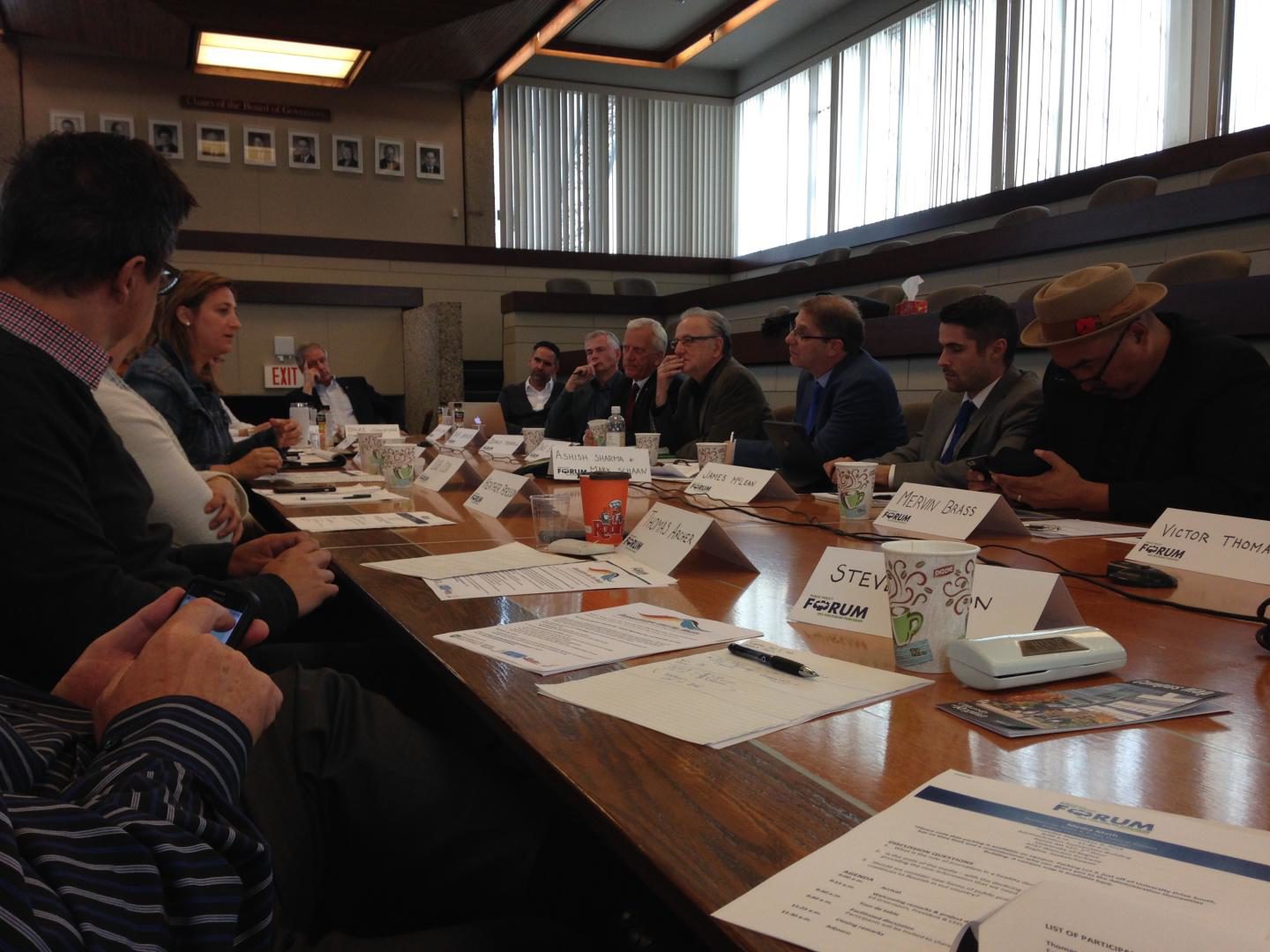 The third of six regional media gatherings organized by the Public Policy Forum was held in Regina Sept. 6.

When the news media struggles, democracy struggles—that much was clear at a Prairie roundtable on the state of Canadian news media.

What to do about it remains a tough question.

The Sept. 6 roundtable, held at the University of Regina, was the third of six regional gatherings to assess the state of Canadian newsrooms, organized by the nonprofit thinktank Public Policy Forum. The project, ‘Media Math: Democracy, News and Public Policy in Canada,’ has undertaken the ambitious task of consulting with news producer and consumers across the country and developing policy recommendations for government, all within a six-month period.

“I took part in the forum because, after around 23 years in the business, I am convinced that good journalism improves the quality of life in our country,” said Heather Persson, editor of the Saskatoon StarPhoenix, told J-Source after the roundtable. But good journalism is on the ropes, participants generally agreed.

Among the 21 people on the invite list were representatives of community newspapers, urban dailies, the Media Guild, the francophone press, citizen advocates, the Indigenous press, and academics concerned with media and civic engagement.  All voiced similar concerns that quality public interest journalism is important to society—and has been losing ground in recent years.

Adjusting to new digital platforms, changing consumer habits, and the near-total migration of Canadian government advertising dollars to U.S.-based corporations like Google and Facebook were among the challenges heard around the table.

“In order to have good journalism, we need a healthy media, and media needs to make money to survive,” summed up Mervin Brass, publisher of Treaty 4 News, an online newspaper, in an interview following the roundtable. “You learn that pretty quickly when you move from a journalist’s chair into a publisher’s chair.”

Brass, a longtime radio journalist before launching Treaty 4 News, said his first priority is to pay his writers.

Indeed, while partipants noted that social media has opened new doorways for public communication, the importance of maintaining paid, professional journalism in the digital age was echoed around the table.

“It was good to be in a room with people who clearly see the value of the work of journalists in the newspaper industry,” said the StarPheonix’s Persson. “The industry reps showed great passion in articulating the importance of these news organizations. They keep the public informed and the government accountable. I think there was generally unity in the messages from people at the table, which was also encouraging.”

The question remains as to what, if any, role public policy can play in ensuring Canadians have access to Canadian public interest journalism.

Historically, Ottawa has exercised a number of levers, including tax policies to curtail cross-border advertising, financing a national public broadcaster,providing distribution assistance to print publications and imposing a levy on cablecoms to support local journalism, to name a few. However, most of these measures were developed long before Netflix, Facebook and other digital giants flooded their products into Canada, upending the advertising and publishing markets that supported much of the country’s journalism.

Dale Eisler, a former journalist and senior policy fellow at the U of R’s Johnson-Shoyama School of Public Policy, is a member of the project’s national advisory committee.

“Clearly we didn’t arrive at a consensus but it was a good opportunity to understand the dimensions and complexity of the issues,” he said after the meeting. Eisler said he walked away with the impression that the gathering was “effective in bringing the challenges to the table, and reaching clear agreement on the democratic role of journalism.”

“The big challenge is, how do we bridge those two aspects in terms of public policy?” he said.

The roundtables are chaired by Ed Greenspon, Forum CEO and a past Globe and Mail editor-in-chief. As soon as the Prairie session wrapped, Greenspon was packing his bags for the next destination, Vancouver. The group plans to commission background research, conduct one-on-one interviews, then hold regional symposium meetings to debate the roundtable findings before concluding its final report later in the year.

Patricia Elliott can be reached on Twitter or at patricia.elliott@j-source.ca.