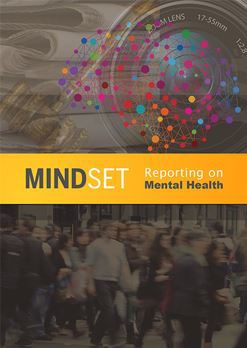 Mindset, a guide for reporting on mental health, will be launched on April 24 in Toronto by the Canadian Journalism Forum on Violence and Trauma and CBC News. The former’s president, Cliff Lonsdale, explains why journalists should take as much care selecting words and considering hidden baggage in mental health reporting as in anything else we do.

When I sat down to write the first draft of Mindset, our team had been researching mental health reporting and stigma for months. But there was still another learning curve to negotiate. I knew that language mattered. I didn’t know just how deeply ingrained my own bad language had become.

I’m not talking about profanity. I’m talking about everyday words and phrases that carry adverse implications for millions of Canadians: words that betray our collective mindset and unwittingly increase the burden for people with mental illnesses.

Right there, see? As a journalist, my instinct is to use as few words as possible.  So I want to write: “…the burden on the mentally ill.” And in the first draft, that’s what I did. Even our eagle-eyed senior editor didn’t see much wrong with it at first, but advisers in the mental health community certainly did. “Put the person ahead of the disease,” they told us.

We’re so used to using a slightly different language when dealing with mental illness that it’s all too easy to retort impatiently: “But that’s how everyone says it.” What’s more, you can argue, phrases such as “healing the sick” don’t generally earn you a rebuke. But there’s no denying that centuries of pejorative language describing people with mental illnesses have left a profound sensitivity among the 20 per cent of us who deal with mental disorders of one kind or another—most often while holding down jobs and wrestling with the same life problems as everyone else.

This was a pivotal issue for us.  We were writing the first comprehensive journalist-to-journalist guide to mental health reporting in Canada.  We had persuaded the Mental Health Commission of Canada, which provided partial funding for the project, that we needed full editorial control and they had taken an enormous leap of faith by agreeing. We guarded our position jealously, because our guide—unlike some others out there—was going to be written from a vantage point of understanding and respect for the needs of journalism. We were pressing for better reporting, not to undermine the principles of our craft.

So our first instincts were to defend the use of many common phrases such as ‘a schizophrenic’, ‘the mentally ill’ and ‘committed suicide’.  But the more we looked at the collateral damage this language inflicts, against no real benefit, the harder it became to justify clinging to familiar words. We don’t say someone is cancerous, because we instantly realize that demeans and devalues them. Yet we write people off—quite literally—as ‘schizophrenics’.  The fact is that schizophrenia encompasses a wide range of illness, from mild to severe. People affected aren’t psychotic all the time.  Some never are.  Serious as the worst untreated cases are, many people with schizophrenia lead productive lives. These are facts that every journalist needs to know. We should take as much care selecting words and considering hidden baggage in these matters as in anything else we do.

It isn’t easy. We did a large number of video interviews for the website that accompanies the Mindset field guide. In a couple of them, people with impeccable backgrounds in mental health slipped up and talked about someone who committed suicide, instead of saying they killed themselves. I still do it sometimes myself, just out of habit, though the guide I helped to write points out that suicide is no longer a crime and whether it constitutes a sin or a moral lapse is not ours to judge.

The Globe and Mail’s André Picard, in his foreword to the guide, wrote: “We have to be conscious about the impact of outdated, prejudicial turns of phrase—not saying, for example, that someone has ‘committed’ suicide, which implies a crime has been committed. We need to do away with euphemisms like ‘died suddenly’ and ‘he snapped’ and use precise language like ‘took his own life’ and ‘suffered a psychotic episode.’

Above all, Mindset urges journalists to treat mental health issues the same way they do everything else. In Picard’s words: “Journalists should be as willing to write about depression as breast cancer, as dogged and thorough in the reporting of advances and setbacks, and as determined to seek out patients to illustrate their stories. They should be no more forgiving of long waits for a child to see a psychiatrist than they are of long waits for grandmothers needing hip replacements. They should cover suicides the same way they cover murders, seeking to find answers about the causes, while mourning the dead, flaws and all.”

Mindset isn’t a niche project for health specialists. It addresses general assignment reporters and editors and journalism students—those most likely to be thrust into news situations in which basic guidance, quickly available, can make all the difference between excellent coverage and reporting that unwittingly inflicts harm on a large proportion of Canadians, including many journalists themselves.

Mindset: Reporting on Mental Health will be launched in English in Toronto on April 24, with other launch events in Vancouver, Montreal and Halifax to follow. It is produced by the Canadian Journalism Forum on Violence and Trauma, with CBC News as media partner and financial assistance from the Mental Health Commission of Canada. Printed copies of the field guide will be made available to requesting news organizations and journalism schools. PDF copies will be downloadable on or after April 24 at https://sites.google.com/a/journalismforum.ca/mindset-mediaguide-ca, where journalists can find many more facts, opinions and references to help them dig deeper into topics of concern. Journalists are also invited to initiate or join in discussion on the project’s Twitter and Facebook sites.

Cliff Lonsdale is the president of the Canadian Journalism Forum on Violence and Trauma. He is a former chief news editor of CBC Television and teaches in the graduate journalism program at Western University in London, Ont.