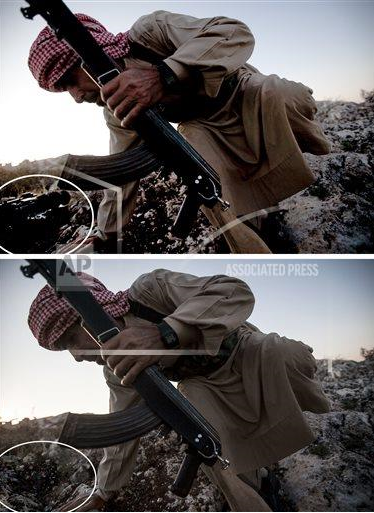 AP fired a photographer who edited out another journalist’s camera that was in the shot of a Syrian resistance fighter. AP’s swift response was correct—if we demand accountability and transparency from those we report on, it’s only right that we—and the public we serve—demand the same of ourselves, writes Mount Royal University journalism student Madison Farkas.

As journalists, it’s essential that we understand our own brand of power in the form of the entry our profession grants us. We have the privilege of access to people, places and events that the general public does not. If we claim that our first and greatest obligation is truth-seeking on behalf of the public, then we owe it to our audience not to deceive them.

And deliberate deception is what seems to have taken place in the case of a freelance photographer fired by the Associated Press (AP) last week after digitally altering one of his images.

AP announced Wednesday that it had “severed ties” with Narciso Contreras, who digitally altered one of his photographs of the war in Syria. In the original image of a Syrian resistance fighter, another journalist’s camera is visible in the lower left corner. In the doctored version, Contreras “cloned” part of the background and used it to cover the other photographer’s equipment, according to the AP’s news release.

This swift and brutal retribution comes as no surprise in an industry that, though fraught with ethical debates, has remained firm in its stance against such calculated misdirection.

Contreras—who said in the press release he is ashamed of his decision—was part of a group of AP photographers who shared a Pulitzer Prize for their work in Syria in 2013.

But all the commendation in the world won’t make up for a lapse in judgment. Not only has Contreras damaged his own credibility and prospects for future employment, he has also given those who already lack faith in journalism one more reason to doubt the integrity of the profession as a whole.

Graeme Roy, director of news photography at the Canadian Press—AP’s north-of-the-border equivalent—said it’s unfortunate that a photojournalist would feel the need to do something like this. “They’re in a stressful position and a stressful place, and sometimes people make mistakes,” he said. “But in my opinion and for our organization, you have to have rules that protect the validity of your report that you distribute. People have to have faith that the photos that you are distributing are faithful reproductions of exactly what was seen at the time.”

While there is debate in the world of photojournalism over exactly how much editing should be allowed in news photography—with cropping and making minor corrections for exposure and colour balance in a gray area—digitally adding or removing any element of a photo is almost universally unacceptable.

Alteration after the fact has been a part of photography since its invention. With the advent of digital editing software, it has become only too easy for any hack with a computer to take a mediocre (but accurate) picture and twist it into an elegant, artistic, visually appealing lie.

But a lie it remains.

Contreras may have been documenting a high-pressure situation with understandably minimal time to compose his shots, but that doesn’t give him the right to change the reality of his surroundings just to make a better picture. One thing remains certain: outright lies deliberately intended to mislead audiences are not OK.

Just as print reporters are forbidden from fabricating sources, photojournalists should not alter their work to create a more cleanly composed photograph.

The removal of a camera may seem minor, but if the AP were to let this incident slide, where do you draw the line on allowing manipulations? If a camera can be zapped out of a picture for the crime of disrupting its composition, why not a person?

If we’re going to demand accountability and transparency from those we report on, it’s only right that we—and the public we serve—demand the same of ourselves. By publicly announcing Contreras’ ethics breach and parting ways with him, AP has demonstrated an admirable commitment to the most basic ethical principles of journalism.

Madison Farkas is a second-year journalism student at Mount Royal University and a reporter for the Calgary Journal.