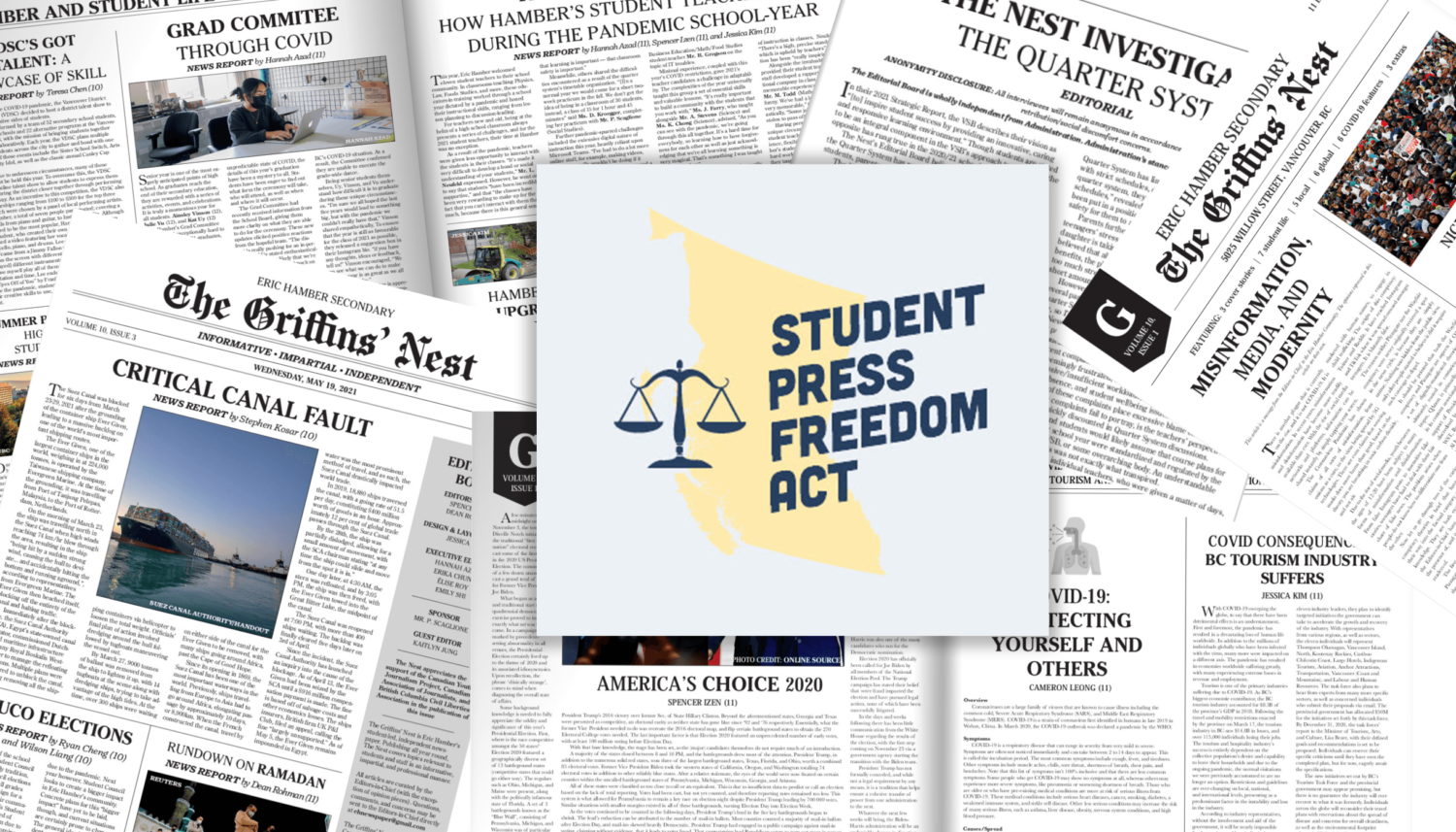 In April, the board of the Griffins’ Nest, Eric Hamber Secondary School’s student newspaper, penned an editorial criticizing the Vancouver School Board for failing to involve students and teachers in its decision-making processes.

However, right before publication, the masthead was informed by the vice-principal that the article would need the principal’s approval to be published — bringing the production of the paper to a halt. It wasn’t the first time that the Nest faced such pressure from the school — editors said the school had expressed concerns over the framing and angle of the editorials in all three issues during that school year alone.

With articles confronting several barriers during their production process, the editorial board notified the principal in June that it was initiating a campaign to propose legislation to prevent more undue interference.

The Student Press Freedom Act is designed to protect freedom of expression and freedom of the press in British Columbia public schools and aims to ensure student journalists’ constitutional rights are protected and consistent with their professional counterparts. The proposed legislation was drafted by EHSS students Spencer Izen and Jessica Kim and was reviewed by lawyer Susanna Allevato Quail of Vancouver-based firm Allevato Quail and Roy and media law expert and X University associate professor Lisa Taylor.

Student journalists have the right to freedom of expression and of the press regardless of support —financial or otherwise — from a school or board of education, reads the draft.

It further states that limits to the creation or publication of student media are applicable when the content is libellous or slanderous; violates a person’s privacy; is obscene; promotes the commission of unlawful acts; poses a threat to the safety or security of the school; or harms the social, emotional, or physical health of students.

Before publishing the third issue, the Nest sent a request for comment to the Vancouver School Board. However, the email was forwarded to the principal without the editorial board’s knowledge. While the publication was on pause, editors at the Nest weren’t able to set up a meeting with the school’s administration.

After the editors contacted the British Columbia Civil Liberties Association and the Canadian Association of Journalists for censorship dispute resolution, the school granted permission for the editorial to be published in mid-May.

The Nest carried on with its production, published Issue 3 on May 14 and distributed copies to the student body. Meanwhile, there was no communication from the school regarding the school’s previous attempt to cancel the editorial.

“It was very worrisome being completely shut out of the conversation, especially when our editorial board members had put in a lot of work throughout the year to ensure that our journalism was up to industry standard,” said Kim, the SPFA campaign co-director and co-drafter.

“It’s essentially about guaranteeing press freedom and allowing student journalists to hold power to account, which is what we aim to do with our paper.”

For the Nest’s first issue, the students wrote an editorial on the rise of misinformation and disinformation, in which QAnon conspiracy theories were described as examples of disinformation that mislead students. Ambrose told the editorial members that the article might offend parents who believed in QAnon. Ultimately, editors were able to convince him to allow the article to be published as is.

In the Nest’s second issue, in February, the editorial board interviewed students and teachers across the district, and wrote a column criticizing the quarter system, which had been adopted by high schools as part of B.C.’s K-12 Education Recovery Plan. Izen said Ambrose told the board he was concerned that the article would cast the school board in a bad light, but would avoid sharing it with the principal, who he believed wouldn’t approve it for publication.

Izen said the principal was most heavily involved in the third issue’s incident, but had no involvement in previous issues, or years for that matter.

Kim, the Nest’s design and layout editor, said the legislation is intended to protect press freedoms for other high schools and student journalists across the province.

“One of our concerns is that maybe other student journalists in the province don’t know that it isn’t their school’s jurisdiction or right to restrict what they publish in that way,” she said. “We want to reach out to other newspapers or yearbook committees in British Columbia and to make sure they know they have the constitutional right.”

EHSS did not respond to requests for comment by publication time.

Izen and Kim are mobilizing support for the legislation, which to date, has been endorsed by the Student Press Law Centre, the British Columbia Youth Council, X University’s Centre for Free Expression and the Youth Political Assembly. They have launched a petition on Change.org (which has received 441 signatures as of publication time) and intend to approach their MLA and the attorney general with the SPFA.

Currently, there is no section in the Canadian Charter of Rights and Freedoms that specifically looks at high school-level journalism, said Taylor.

Taylor, who helped the Nest with its censorship dispute in May, said the rights of high school student journalism are not treated as an act of journalism covered by Section 2 (b) of the charter. Rather, high school journalism is often seen as something similar to a school’s athletic team or a yearbook class.

“We’ve seen American legislation like this, but it’s the first time I’ve seen a Canadian bill in the Canadian jurisdiction that asks the state to recognize the rights of student journalists,” said Taylor. “I think that kind of makes the point about why high school student journalism is really important journalism.”

U.S.-based non-profit SPLC has laid the groundwork for the SPFA campaign, said Izen.

Founded in 1974, the SPLC works to protect press freedom rights for student journalists at high school and university student newspapers. In 2015, the SPLC launched the New Voices movement, pushing for the protection of student press rights with state law.

There are currently 14 states that have student press freedom laws, with the first passed in California in 1977.

Hillary Davis, SPLC’s New Voices advocacy and campaign organizer, said the organization’s endorsement of the SPFA campaign demonstrates its interest in working to expand on the passage of any student press freedom legislation in areas outside of the U.S.

“The fact that this is building on the successes of the New Voices Movement indicates to us that we may have some help to offer to the students and others who want to get involved in B.C.,” said Davis.

She said they found that with the New Voices movement in the United States, students realize they’ve been censored when more advocates, teachers and students talk about student press freedom issues.

She noted that due to the SPLC’s lack of knowledge in Canadian law, the organization is unable to provide a lot of legal assistance.

“I suspect there are considerably more issues going on across Canada than anybody has known about and we certainly would love to hear from students and connect them with resources to help,” she said. “I feel like it’s a conversation that may have been long overdue.”

“People perceive college students as adults, so they recognize that the free speech laws are very clearly applicable to them,” said Davis. “Schools also know that they don’t have the same sort of ability to squelch college students as they do high school students.”

The Canadian Youth Journalism Project, founded in 2018, is a non-profit organization which promotes journalistic resources and opportunities for high school students in Canada. Isabel Sternthal, co-founder of the CYJP, says she has spoken to many high school journalists who felt disrespected when pieces were pulled out by schools for various reasons.

“It’s also really frustrating, because very often the stories that are censored are the most important ones, ones that your readers need to see and are most relevant to your community,” she said.

As high school newspapers often lack resources, there are real repercussions if students insist on moving forward with a story that the institution has rejected.

She added that it is also important to recognize there are occasions where schools are justified to pull pieces from publications, particularly when there are concerns over  slander and libel.

“There should be a conversation with those students about what went wrong and how do we fix this piece so that it does live up to the standards of good journalism,” she said.

Oftentimes, schools take down articles without doing any follow-ups or providing additional resources to students. Sternthal described this as a disservice to the school community and students who are interested in producing media.

“That’s anecdotal and we don’t have data on that, but I heard very few instances when really thoughtful conversations are had after some kind of incident,” she said.

Taylor said students are entitled to the right to publish fair, balanced and relevant articles — if the school is suppressing this right, then the publication is considered public relations or propaganda instead of a piece of journalism.

“A part of great journalism will report negatively even on our own institution, if that’s what’s called for.”

In cases where school advisers fear that articles could be defamatory and students could get sued, schools should seek support in media law education to assist students with their reporting, said Taylor. 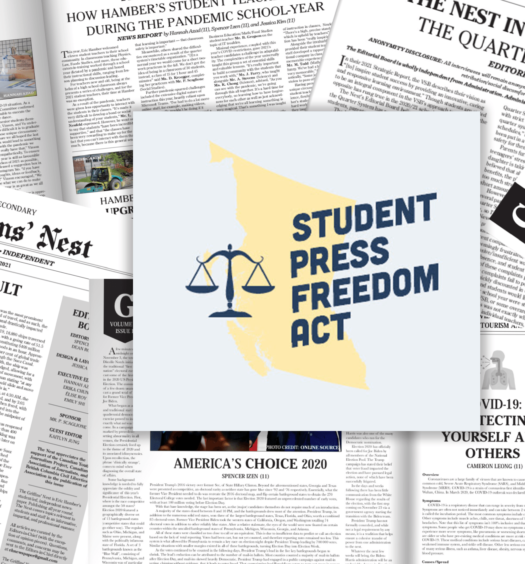