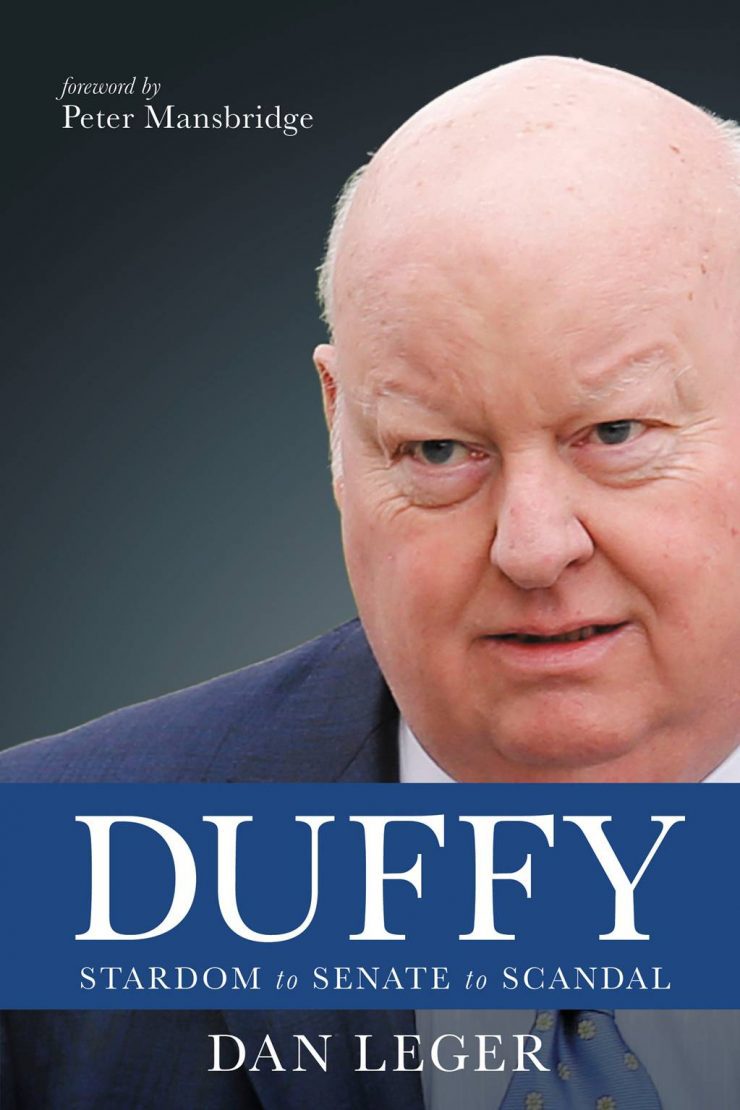 Book Review: Duffy is a well-crafted take on the journalist-turned-senator’s rise and fall

Duffy: Stardom to Senate to Scandal is well-researched and elegantly written biography of Mike Duffy, from his days as an ambitious kid and his climb out of the Maritimes, to becoming a journalist and senator. Veteran Ottawa journalist Mark Bourrie reviews the book.

“Mike Duffy is the most famous journalist on Parliament Hill. For whatever reason, people like to tell him things, and he always has gossip that no one else knows. If Duffy is appointed to the Senate—the rumour that makes its way around the circuit at least twice a year—not even his fellow journalists, usually an envious lot, will mind.” —Stevie Cameron, Ottawa Inside Out, 1989

There’s a reason so many journalists go into public relations in their second careers and not the more interesting profession of fortune telling or the more lucrative business of picking stocks. Stevie Cameron’s book was a useful guide to Ottawa when it came out, but her observation on Mike Duffy is one of those many things that journalists write that they hope people forget.

Dan Leger has written an entire book on Mike Duffy. Just over 220 pages, Duffy: Stardom to Senate to Scandal is a quick read, which, in a sense, is a reminder that the story is not over. The tale will have an end, one that is unlikely to be pleasant for Duffy. Perhaps the people at Nimbus Publishing may decide to reissue Duffy: Stardom to Senate to Scandal when the case is finally resolved.

Leger has written a good, short book for anyone who wants to know what happened to Duffy. We get a glimpse of the Duffy family that lays the foundation for a bit of Freudian analysis. We see a kid who was ambitious but unfocused and disorganized. Through a series of breaks, he finally finds himself in the locus of power. But he’s on the wrong side of the fence.

The social skills that Stevie Cameron and every newbie in the Parliamentary Press Gallery picked up on are at least as useful in politics as they are in journalism. I first met Duffy in 1994, and from then on I’ve known him as one of the few “name” journalists on the Hill who isn’t a snob and who seems to sincerely like other people.

Leger lets a bit of schoolmarm creep into the book. Duffy gets some ribbing for his expensive social life, though that extracurricular “work” was the key to Duffy’s success. And he pokes Duffy for his tailor-made suits, as though a guy shaped like him could walk into Moores or even Harry Rosen and buy one off the rack.

The strength of this book is its biographic research and the elegant description of an ambitious, uneducated young man clawing his way out of the Maritimes.

Once in journalism, it’s hard to make that leap into electoral politics. Many hear the call but few are chosen. It might have been possible for Duffy to win a seat in PEI, but losing would have meant unemployment and quick obscurity.

The Senate is another beast altogether. Leger forgets to mention it, but journalists have been filling seats in the Senate since Confederation.

Charles Bishop, Grattan O’Leary, Richard Doyle, William Gladstone Jaffray, Romeo LeBlanc, Joan Fraser, Pat Carney, Jim Munson, Joyce Fairbairn, Betty Kennedy and Linda Frum are some of the journalists who were well-known in English Canada in their day and ended up in what Duffy called, the place of “taskless thanks.”

So let’s deal with Duffy. Leger has some sympathy for the man and the miserable plight he’s in, but there are some dots left unconnected and some math left undone. According to Leger, CTV was paying Duffy $250,000 a year, plus perks like membership in the Rideau Club and a clothing allowance. He also had a lucrative sideline on the speaking circuit.

Taking the Senate offer meant a $100,000-a-year pay cut, plus the loss of those cheques from the Rotary Clubs and the Chambers of Commerce. It doesn’t seem like a stretch to conclude that Duffy likely lost some $3,000 a week in gross income. That might explain, though not excuse, the alleged expense padding that followed.

Leger also takes on Duffy on the issue of his “representation” of PEI. The author accepts a common misconception, that senators represent provinces. They don’t. Senators do not represent anyone or any place. A senator is not ethically or legally bound to listen to anyone from the province they’re from. Duffy could, within the bounds of the Canadian constitution, introduce a bill to ban the consumption of lobsters and potatoes and there wasn’t a damn thing anyone in PEI could do about it, legally or politically.

But these are digressions for those who want to know the sad story of a man who craved status and respect, who busted his ass to get it and who lived high on Parliament Hill. Duffy thought he was finally cloaked in the purple, moving among the political elite and enjoying the open partisanship that he had previously kept under wraps—not always with success—when he a member of the Gallery.

But in the end, Duffy was a dupe, and, I hate to say, a fool. He raised a lot of money for his political friends. He fought their dirty fights without carefully keeping his own affairs in order. And, now that he’s turned out, he has nothing left to show for a lifelong campaign for success, approval and, to be maudlin, public affection.

Leger has written a well-crafted book that tells the story with wit and style. Perhaps, after a few long walks, the protagonist may end up writing his own version.

Dr. Mark Bourrie has known Mike Duffy since 1994. He writes for national publications and teaches history at Carleton University and Canadian Studies at the University of Ottawa, where he will also be a law student starting in the fall of 2014. His next book, Kill the Messengers: Stephen Harper’s attack on your right to know, will be published by HarperCollins in early 2015.