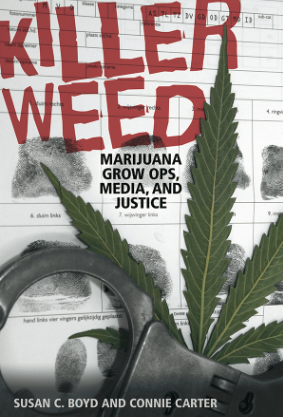 But authors Susan Boyd and Connie Carter claim we are beset by a similar “grow-op mania,” and contemporary allegations about pot gardens constitute an identical 21st century drug scare fuelled by newspapers, law enforcement and the self-interested.

“What remains striking over the 15-year span of our media project is the hyperbole and unsubstantiated claims about marijuana grow ops and organized crime expressed by a small group of spokespeople, mostly RCMP, police, and some government officials, and reported, for the most part, uncritically, by the print media,” they write in their new book, Killer Weed: Marijuana Grow Ops, Media, and Justice (University of Toronto Press). “Taken at face value, the newspapers we analysed depict Vancouver, and British Columbia in general, as a war zone of racialized, violent, greedy, drug gangs vying for profits, endangering law-abiding citizens, and moving rapidly into suburban spaces.”

Boyd, a professor in the faculty of human and social development at the University of Victoria, and Carter, a senior policy analyst with the Canadian Drug Policy Coalition, are concerned about the inter-relationship and influence of the police publicity machine, mainstream media and vocal claims-makers.

They examined coverage of marijuana grow operations between 1995 and 2009 in four newspapers—2,524 articles published in The Globe and Mail, The Vancouver Sun, the Province and The Victoria Times Colonist. They conclude the discussion about cannabis grow-ops was skewed and too-heavily dominated by scantly scrutinized, often-exaggerated claims.

Now, as a B.C. journalist and the author of a book on marijuana, I wish they had named reporters in the same way they criticize Darryl Plecas. He was the RCMP Research Chair at the University of the Fraser Valley, now Liberal MLA for Abbotsford South, responsible for often-cited, questionable claims about grow-ops.

I feel the lens through which readers are asked to view this study seems too narrow—a quick skim of stories from The Georgia Straight during the same period hardly puts this material into perspective.

There were other sources of information, context and alternate narratives available to readers—including my own work in The Sun. This material is a piece of a larger picture that has more elements and dynamics than are presented—the newspaper stories are trees in a larger, more diverse forest.

The situation is not as dire in my opinion as the authors suggest, though it should worry us.

In their view, a parallel can be drawn not just to Reefer Madness but also to the “crack scare” of the 1990s, in which they say both media and politicians ignored and misrepresented evidence. Such sensational reporting about the cocaine derivative, Boyd and Carter note, led to a refueled drug war and provided a handy scapegoat and diversion from the causes of urban poverty—a collapsing North American industrial economy.

The contemporary marijuana grow-op horror stories, they insist, are of a similar order and are being likewise propelled by these newspapers, RCMP, academics and politicians playing fast and loose with the facts.

The authors emphasize they do not contest claims that some grow-ops may be run by organized crime or that some grow operations contribute to health risks of children living on site. But they maintain that “thus far, the evidence provided by reporters and spokespeople fails to substantiate their claims.”

The two writers accuse newspapers of hyping claims of fire and electricity theft, fears of the real estate industry and public safety concerns, such as mould or child-endangerment, especially in medical marijuana grow operations.

“There is no comprehensive scholarly and peer-reviewed research to support claims that legal medical marijuana sites are linked to criminal elements or pose safety hazards to children,” the authors state. “Newspaper coverage has effectively shaped perceptions that all grow ops are spaces where criminality is linked with specific public safety risks that bring issues like fire, mound, and other property damage to unsuspecting safe neighbourhoods and innocent home buyers.”

The result has been a series of municipal initiatives and bylaws aimed at grow-ops that widen the net of surveillance and regulation that is normally the purview of the criminal legal system.

We have seen a shift from using the criminal law with its Charter protections to the use of administrative regulations that trample on civil rights.

“By focusing on public safety in relation to marijuana grow ops local municipalities have been able to bypass foundational legal safeguards and principles relating to issues like the presumption of innocence and warrantless entry,” Boyd and Carter contend.

Boyd and Carter are correct—there is a pernicious dynamic at play in the formation of drug policy in North America and this important work raises key questions about that. It also comes at a particularly pertinent time—the Federal Court of Canada is hearing arguments about the legality of Ottawa’s new medical marijuana program and patients’ right to grow their own.