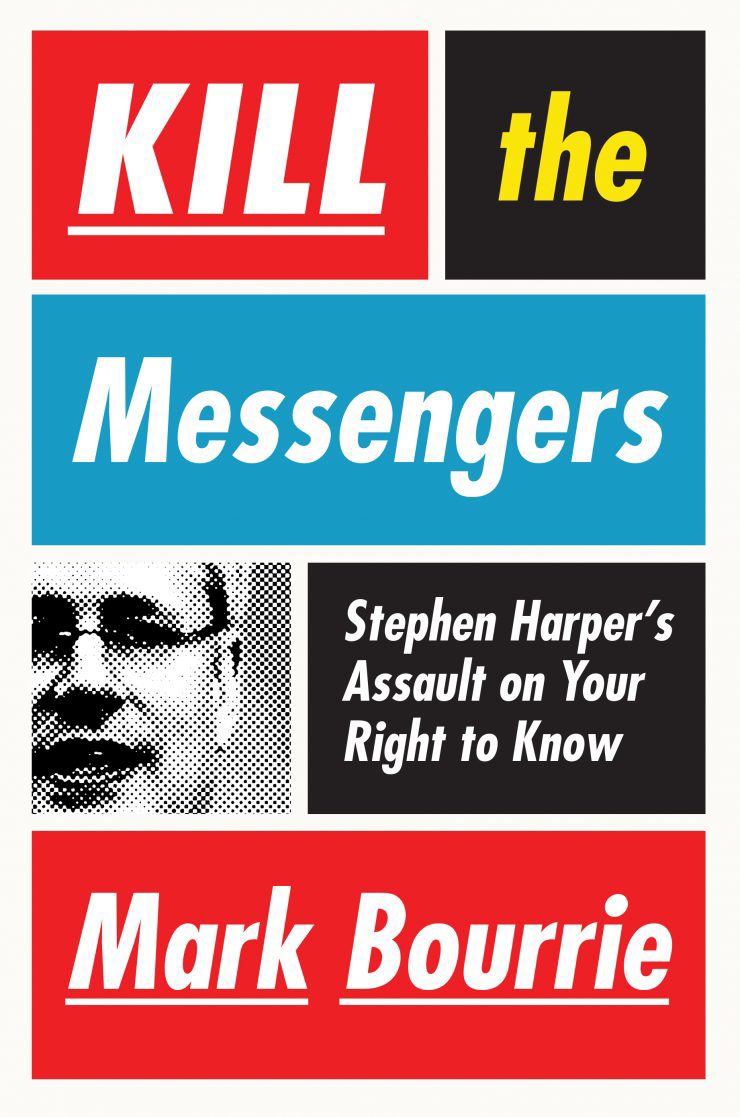 Book review: The silence of government and media in Kill the Messengers

On the last day of my first job in politics, I sat down in the office of a high-ranking bureaucrat, his window overlooking the grandeur of the legislative building across the street.

Not enough people take the time to ask meaningful questions at pivotal moments, so I told him the truth: I had learned to be disillusioned with everyone.

I thought of this conversation often while reading Mark Bourrie’s Kill the Messengers, an extensive analysis of Stephen Harper’s nine-year-old government and its approach to information, communication and control, especially regarding the media.

We are at the beginning of an election year, a pivotal moment for people to start asking meaningful questions about the way our politics are covered, the type of country we have become under Harper’s reign and who is responsible for those changes.

The answers, as Bourrie’s book makes clear, are depressing as hell.

We are a country whose identity has been systematically dismantled, he recounts, who can barely remember a time when we were known as peacekeepers, an economically and politically independent country, reasonable and focused on our responsibilities to one another. Harper has, Bourrie writes, “lobotomized a large part of the country’s cultural memory” in his efforts to recast Canada and the type of government it needs.

We are a country where the long-form census was tossed away because a handful of people found it invasive to state how many bathrooms were in their home. We’re also a country that recently voted against reinstating the long-form even in the face of evidence that its eradication has had a directly negative impact, and its ineffective replacement costs us more.

We are a country whose government has rewritten its military history and recast it as a nation of warriors, even while neglecting its veterans.

We are a country that has declared “war on expertise,” as Bourrie notes, shutting down government libraries and scientific research labs across the country and gagging the bureaucracy, all the while ramping up government surveillance of environmental and Aboriginal activists, oil sands opponents and regular citizens.

And we are a country that has paid countless millions for Harper’s Economic Action Plan advertisements, convincing ourselves that this program has had an impact beyond the cynical and intentional manipulation of public perceptions.

By the time you have read chapters five through 10, you will be ready for an election. Even those of conservative ideology should be moved by the cost of Harper’s misguided decisions and the fact that his efforts to control the narrative have caused him to break every pledge of accountability on which he originally campaigned.

But if Bourrie’s book is successful in chronicling the “what” of Harper’s time in office, it falls short when it comes to why.

As a nation, we still do not know our prime minister well. I don’t believe journalists can ever truly know a political leader—the gulf of trust and access is just too wide. But in Bourrie’s accounting, the dramatic reimagining of the Canadian identity is the result of one bad man’s deranged personality—that Harper does these things because he is vindictive, spiteful and hellbent on manipulating public service to his will.

I am not a fan of the Harper government, but saying that Harper has done these things because he’s a bad guy is simplistic at best.

Yes, political leadership can be a bizarre combination of ego and blinders, but these individuals do not believe they are doing the wrong thing, and they feel strongly that the alternative is worse. In government, calculated decisions are made every day, from turning down a media request to wiping government hard drives. In each case someone has decided their motivations justify their tactics, and that fact demands meaningful exploration.

Bourrie does not attempt to understand the why. As a result, Kill the Messengers manages to be both incredibly harsh and uncomfortably naïve.

He compares Harper’s actions to East Germany and ridicules his focus on Parliament Hill security, even though his book obviously went to press before last fall’s Centre Block shootout and the murder of Cpl. Nathan Cirillo.

When recounting an incident in which Hill security was scrambled so that the PM could have lunch with his son, Bourrie describes the journalistic eye rolling that followed and concludes: “He likes this. He likes this far too much.” It is easy to dehumanize politicians, but before you assert that such security measures are “a game,” try to imagine the stress and worry of making your young children public figures.

On the flipside, Bourrie approaches the role of the media as an institution whose intentions are pure, thereby freeing them from real scrutiny.

The secondary tale of Kill the Messengers is the story within a story of Harper’s mistreatment of the media, his efforts to sideline Parliamentary reporters and clamp down on the flow of information within his government.

Bourrie is dismissive of those he doesn’t consider real reporters, but largely ignores the industry-wide realities that degrade the journalistic process.

And yes, Bourrie states that in Canada, “our media has always had a hard time being strong enough to do its job,” but he chalks this up to disadvantages of size and resources.

He flicks at the idea that journalism as a profession is suffering from cancer, but doesn’t seem to consider that it may actually be dying from serious, self-inflicted wounds.

If politics is run by “professional strategists, pollsters and fundraisers,” then journalists have to admit that their own industry is increasingly run by Google analytics, click-bait and custom content.

The media undermines its own position by caving to Harper’s press conference rules, as the Asper family did when it controlled the CanWest chain, or by attending Rob Ford events even after he banned certain members of the press.

The quality, accuracy and intent of media reports are being degraded from the inside out, an issue that must be confronted when questioning why governments are choosing to limit their exposure to reporters.

But the media loathes self-analysis. Reporters and editors defend their mistakes as the result of being busy, or rushed, or over extended—excuses that would not be acceptable from any other industry. And when real problems are exposed the media clamps up, shuts down and attacks those who speak out, just the way Harper does.

If reporters want to understand how people feel about the media, they just have to think about how their industry feels about Jesse Brown.

By wrapping Harper’s stories in the story of media mistreatment, Bourrie dares readers to pick a side, which is a dangerous game.

Trust in journalism has been diminished to such an extent that picking a fight with reporters is actually not a bad political strategy.

Kill the Messengers makes a powerful case for being disillusioned with everyone. But it’s a pivotal time to push back.

We deserve a government that acts in the public interest instead of constantly calculating its own political advantage. And we deserve a strong and robust media that admits its own failings and works to correct them.

Bourrie’s book is a useful catalyst for the creation of both.

Siri Agrell is currently contributing to the professionalization of communications. She served as Deputy Director of Communications to Ontario Premier Kathleen Wynne, and worked as a reporter for 10 years, most recently with The Globe and Mail.