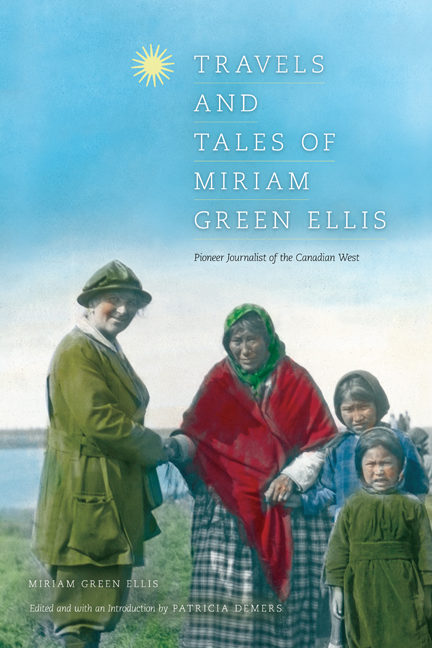 In her new book, University of Alberta professor Patricia Demers examines the legacy of Miriam Green Ellis, an all-but-forgotten agricultural reporter from the Prairies who refused to be confined to the "women's pages." J-Source Agricultural Editor Mary Baxter writes Demers should be lauded for her eye-opening book.

In her new book, University of Alberta professor Patricia Demers examines the legacy of Miriam Green Ellis, an all-but-forgotten agricultural reporter from the Prairies who refused to be confined to the “women’s pages.” J-Source Agricultural Editor Mary Baxter writes Demers should be lauded for her eye-opening book.

For women working in journalism now, it’s difficult to comprehend what it was like when Miriam Green Ellis (1879-1964) first began reporting just before the First World War. Back then, women in Canada couldn’t vote. By 1922 she would have been one of a mere 248 women employed as an editor or reporter in the country.1 Most would have been employed on the women’s pages.2

In Travels and Tales of Miriam Ellis: Pioneer Journalist of the Canadian West, editor Patricia Demers compiles published and unpublished work by Ellis, who was perhaps best known as the western editor for nearly 25 years of the Montreal-based Family Herald and Weekly Star, a twice-monthly national rural magazine. Before that, Ellis worked as a news reporter for publications in Prince Albert, Regina and Edmonton.

In the rather lengthy introduction, Demers, a professor in the University of Alberta’s department of English and Film Studies, offers a biographical account of Ellis that touches on her early years growing up on the family farm near Athens, Ont. and acquiring accreditation as a music teacher from the Toronto Conservatory of Music. Details, however, are scant, writes Demers, who mined documents and photographs Ellis willed to the university. What is known is that MGE, as Demers often refers to Ellis in the introduction, moved out west with her family in 1904 and, shortly thereafter married George Edward Ellis, a teacher and principal who grew up near MGE’s family farm in Ontario. By 1912 the couple lived in Prince Albert, Sask. Four years later they were separated and, by 1917, Ellis was in Edmonton writing for the Edmonton Bulletin. Her ability as a reporter was well recognized even if how it was acknowledged left much to be desired — as exemplified by her boss Frank Oliver’s comment that she was “the best damned man I’ve got.”3

Demers, however, identifies a 1922 trip to Aklavik in the Northwest Territories as what really cemented Ellis’ long and successful career. The trip became fodder for a popular speaking tour, countless articles and at least two short stories.

The short stories and “Down North,” Ellis’s personal account of the trip, receive their first-ever publication in this book. Also included are selections of her agricultural writing, features about prairie life and a small selection of her photographs. More of the photographs can be found on a web exhibit.

Ellis, Demers writes in the introduction, “is not a mere hack, bereft of the trimmings of non-linear narration, extended metaphorical allusions or recherché diction, but rather emerges as an individualistic communicator, able to capture and hold attention, tell a story, sketch distinctive characters, and stir emotions.”

The agricultural reporter’s keen eye for details is certainly evident throughout the collection. The many descriptive passages in “Down North” undermine preconceptions of turn-of-the-century northern Canada as a remote environment that has little connection with the communities and culture of the Canadian south. Everywhere Ellis looks she finds connection: the Inuit woman who travels back with them to go to attend trial (for beating her husband); kitchen gardens and even wheat crops; an Inuit photographer. At Fort Simpson, northwest of Great Slave Lake she lunches with “Flynn Harris, the Indian agent,” and discovers a law library in his office and learns he was once a lawyer. “He had been called to the bar in Nova Scotia, in the old North West Territories and, as he said, a lot of other bars as well.”

Her sensitivity to environmental and social change lends resonance to her writing. In “Their Second Honeymoon,” which appeared in 1928, she writes about an elderly couple who, “forty-odd years ago,” packed their belongings into a Red River cart pulled by oxen to homestead on the prairies. Years later, Ellis meets this couple in a campground. They are on a road trip to Banff, their first holiday away from the farm since their honeymoon. This time, “a six-cylinder, late model” car is their transportation.

Her use of first person perspective and a breezy, friendly tone creates a sense of immediacy; it’s easy to imagine we’re overhearing her describing her experiences to a friend over a cup of tea. And this quality combined with what we now know about some of the innocent-seeming situations she witnessed lends ironic poignancy to some of her observations. In “Down North,” during her stay at Fort Norman, she notes: “it seems to be the general impression that the Indians are well treated — in fact, that they are being spoiled by the traders who are competing for their furs.”

Indeed, there is considerable historical value to be mined from Ellis’ writing. Her account of the land resettlement programs during the Great Depression preserves a nearly forgotten event that helped shape Western Canada. She describes the environmental devastation of the 1930s prairie drought in haunting detail:

“A pittance of rain has fallen at Regina during the present crop season; there was no snow last winter; high winds kept swirling the soil from one township to the next, so that when seed time came, the land was thoroughly dry, pulverized. Farmers declared they would not put in seed till it rained; but day followed day and no rain and it was past time to sow if a crop were to have any chance of ripening, so with many misgivings, they put in their seed, the wind blowing the soil in their faces as they worked.”

At times, there’s a lot of sand to sift to find the gems, and throughout the collection a rather cloying self-consciousness sometimes diminishes otherwise powerful observations. In “Down North,” while on the steamboat, for example, she spies a “lone man digging in the side of the river bank.” She enthuses about the possibility of another Klondike (ensuing decades would prove her right). The captain, on the other hand, describes him as “just some fool scratching round the dirt.” His comment puts her on the defensive. “It is a little depressing to have people forever squelching one’s enthusiasms,’” she writes, crankily.

Yet these flaws are part of what makes it so easy to put ourselves in Ellis’s shoes, even after all of this time. Her narrative persona thoroughly convinces us that she was just an ordinary woman encountering some most extraordinary sights and moments.

Demers argues convincingly that Ellis’s most significant contribution may well have been to be the first woman to write from a sense of national identity about Canada’s northern communities. Ellis is no member of an imperialist regime bent on laying claim through the practice of documentation. In “Down North” she ventures into her own country’s backyard as “an engaged, curious citizen, who enacts the drama of departure and return, without overlooking experiences of frustration and disjunction.”

Without a doubt “Down North” is a major contribution to the Canadian cannon of literary non-fiction. It is astonishing, and rather appalling to think that if it hadn’t been for Demers’ efforts, this work could well have languished in a pile of records. Its discovery begs the question of what other treasures might be out there and, in this age of arts funding cuts, how on earth do we find the resources to reclaim them?

Finally, although Demers doesn’t touch on it, I think there is also a case to be made about the close relationship between agricultural and environmental writing and their shared antecedents. “Down North” demonstrates Ellis was not simply one of Canada’s most prominent agricultural writers. While her colleagues focused their attention on international events and politics, she trained her eye on the landscape she inhabited and our relationship to it.

All in all, Ellis may well have been one of Western Canada’s most gifted early women writers and we have Demers to thank for returning her to us.