The collection is making waves internationally, a resource with potential to help increase visibility and ‘go beyond the clichés’

Vice platform Broadly made stock photos a little more inclusive on March 26 with the release of the Gender Spectrum Collection: Stock Photos Beyond the Binary. The collection of over 180 images of trans and non-binary models, available for free use internationally, aims to address the lack of nuanced imagery used to portray gender diverse communities in the mainstream media.

Broadly CEO Lindsay Schrupp said in an editor’s letter published Tuesday that for years now, she and many members of her team have felt “limited” by the stock imagery available for their use on the site, with a mandate that includes “centering the lives and experiences of women, gender non-conforming people, and LGBT individuals” in its reporting.

“It’s pretty much been on our minds … since the beginning of Broadly, because we’ve been committed to publishing those stories since Broadly’s inception,” explained Sarah Burke, special projects editor at Broadly and project lead on the photo collection.

Today we're publishing a gender inclusive stock photo library available for free. The media needs to do better at representing trans and non-binary people, and that responsibility falls on all of us. https://t.co/qUYae574wg

Stock photos on the whole are notorious for lacking diversity and portraying underrepresented groups through stereotypes. They’ve been demonstrated to shape social attitudes and reinforce cultural patterns. In some cases, the use of stock photos at all can minimize the human impacts of a news story or belie the biases of a media organization.

Broadly’s collection is the latest in a string of efforts to improve representation and nuance in stock images. In 2015, for example, Neosha Gardner launched CreateHER Stock, having discovered she “wasn’t the only one who had major trouble with searching for authentic stock photography that featured Black women.” Last spring, the Huffington Post published its own roundup of images featuring Asian-Americans of different gender identities, ages and body types to go beyond common stereotypes and to better reflect that on its own site.

Demand for stock imagery of trans and gender non-conforming people has been on the rise over the last year, Schrupp said in her editor’s letter. Shutterstock told Broadly it saw a 64 per cent increase in the number of times the term “transgender” was searched between February 2018 and 2019, while Getty Images said the frequency of searches for “gender fluid”  tripled between June 2017 and 2018.

Yet, the supply of images was neither large nor diverse enough to meet these needs, leaving many bloggers and editors with little option but to publish cliched images like that of a trans flag.

It wasn’t until around six months ago that the team felt it had the resources to produce the images, according to Burke. 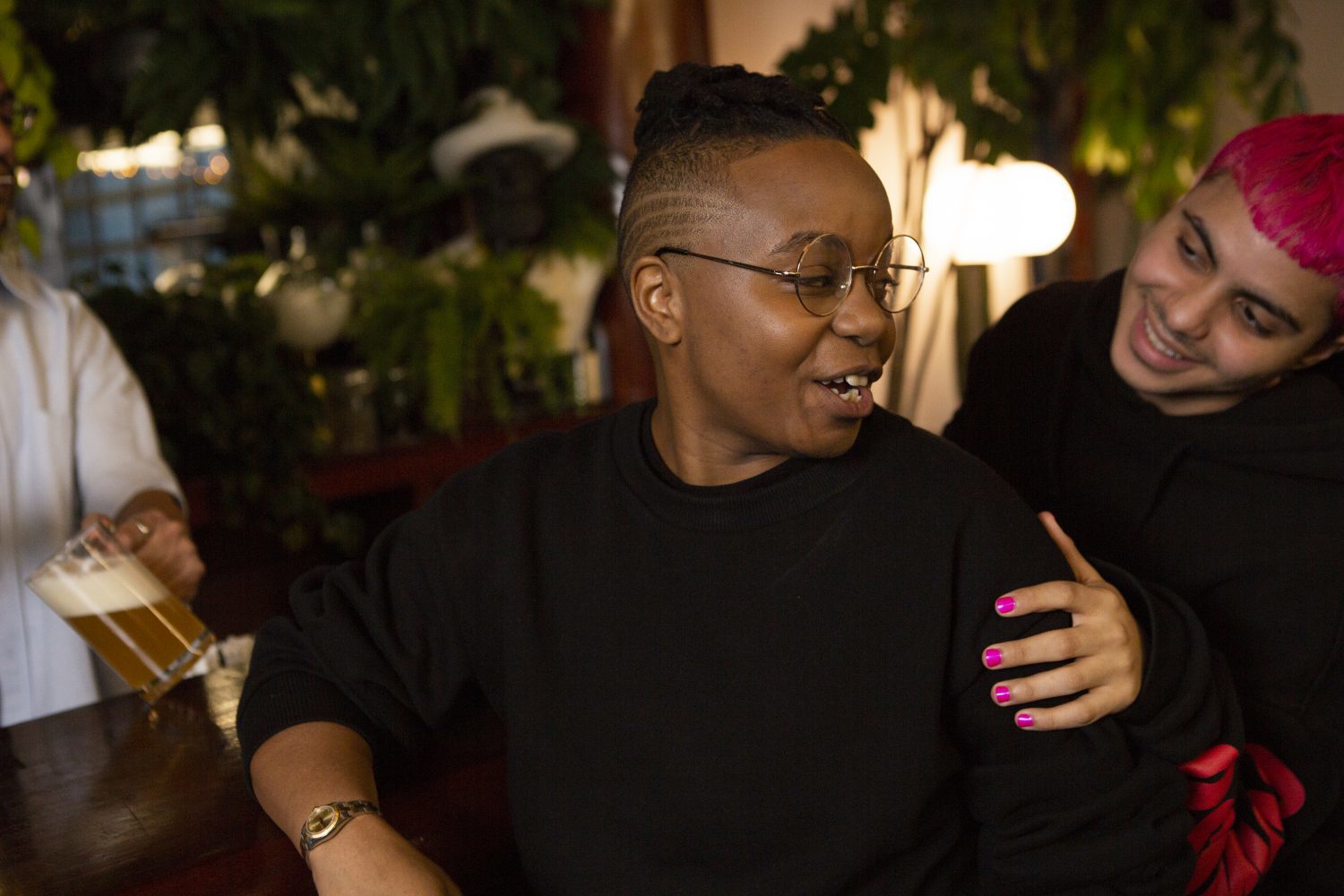 A transmasculine person with a friend at a bar. Photo by Zackary Drucker/The Gender Spectrum Collection

Since the photos were released on Tuesday morning, both Schrupp and Burke said reception has been “overwhelmingly positive.” The team has fielded requests for comment and use of the photos for an array of purposes from across the world, and has received submissions from trans and non-binary readers hoping to add to the collection.

The photos, which are broken up into categories based on what they depict – lifestyle, relationships, technology, work, school, health, and moods – are available through a Creative Commons licence, which allows their use in any country, for any reason, free of charge, as long as they are not used for commercial purposes, harassment, or in a way that is harmful to the image subjects or the communities they represent.

Schrupp and Burke hope those using the images will thoughtfully and critically examine the way they publish them, and the headlines that accompany them. They hope the photos will be posted alongside writing on a range of topics, beyond those about trans and gender identity issues.

“I would love to see these photos used on stories about wellness, about fitness, about beauty, about anything that we write and report about every day,” Schrupp said. “I think that seeing trans and non-binary people as part of these subjects and topics helps people realize that trans and non-binary people are everywhere, and they are real people with real interests and expertise and experiences.” 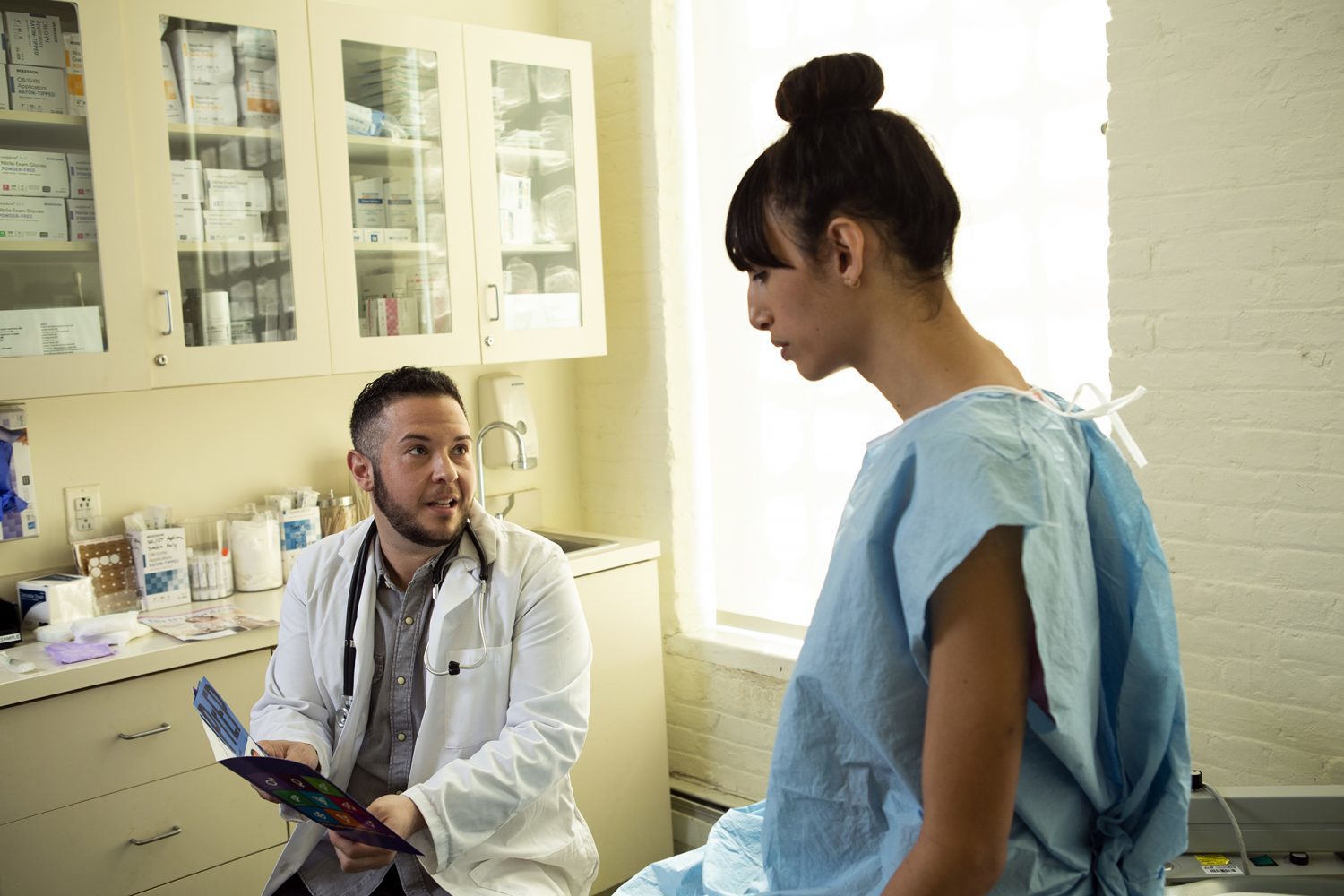 A transgender woman in a hospital gown speaking to her doctor, a transgender man, in an exam room. Photo by Zachary Drucker/The Gender Spectrum Collection

Photographer Zackary Drucker shared this sentiment. The lead photographer on the project said she believes the images “are affirming and render trans lives in holistic and positive ways.” She hopes these images, like the rest of her work, help in “expanding our culture’s notions of difference, especially around gender diversity.”

Among the many editors who said they’re excited to use the database is Sarah Marloff, editor of Qmmunity – the queer-focused section of Austin, Texas alt-weekly paper the Austin Chronicle. For Marloff, the stock images fill a large gap in representation within the art that’s available to accompany the section’s articles.

Marloff said it was shortly before the release of Broadly’s collection that she’d spent a few hours weeding through stereotypical stock images to go with a soon-to-be-published column on Trans Day of Visibility, left with little choice beyond a drawing of a trans flag. Marloff said she’s often encountered “weird, disjointed images” of trans and gender non-conforming people in stock collections, with body parts cropped out, and had few alternatives until she came across the newly-released stock photos, which she opted to use for her column. 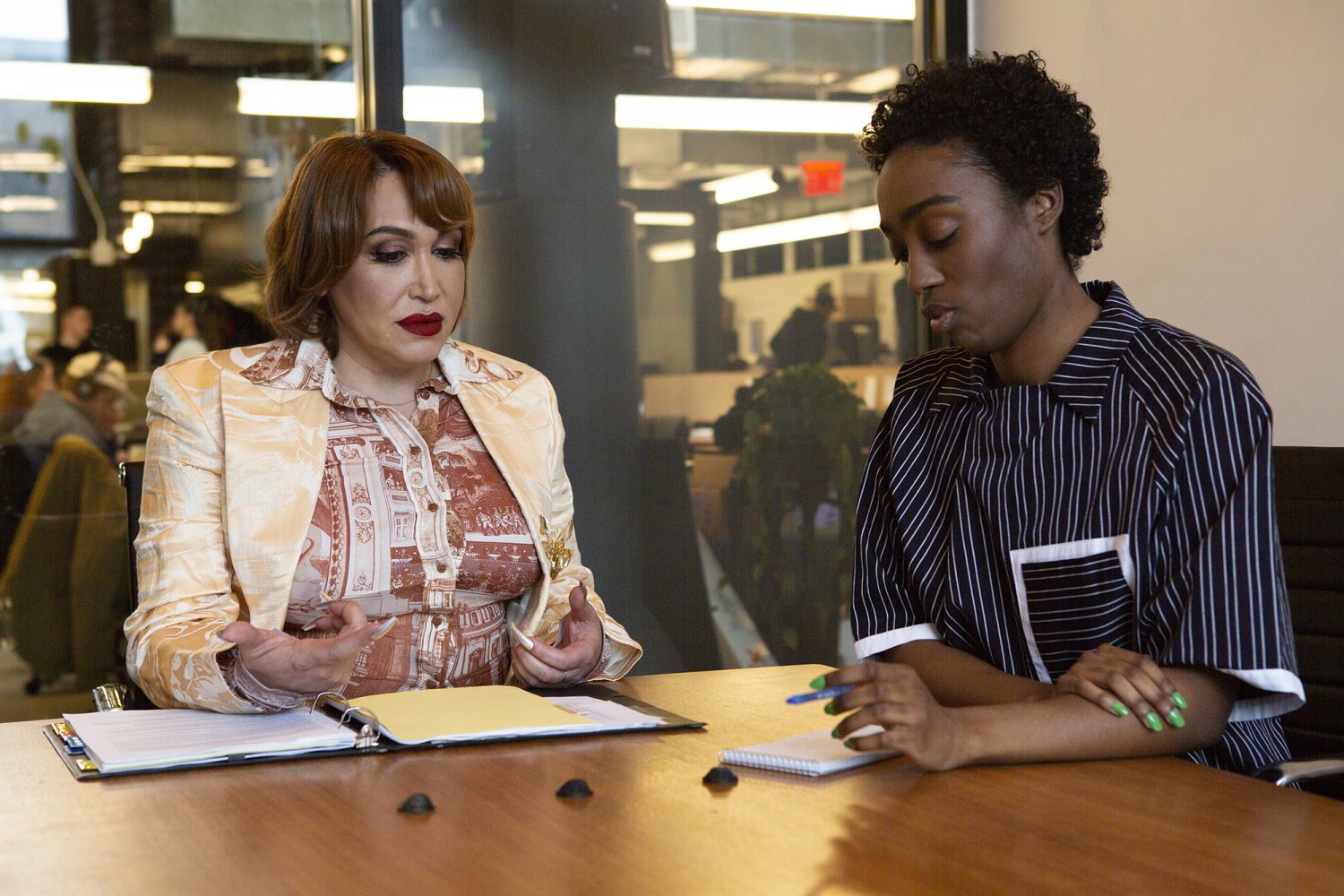 Arvin Joaquin, associate editor at Daily Xtra, Canada’s leading source of queer news, has also had difficulty locating stock photos that represent gender diverse communities in holistic and nuanced ways. To Joaquin, mainstream Canadian media has a ways to go in representing trans and gender non-conforming people sufficiently and accurately, but the photo collection is a valuable resource for news outlets hoping to correct this.

And Marloff said she hopes to introduce the photos into the body of stock images used across the entire paper, not just within Qmmunity.

“My goal is to go to our editor-in-chief and be like, ‘Can we just use these when we need stock photos?’ Can we just rotate them in?’” Marloff said. “It doesn’t have to be, ‘here is a trans person,’ it can just be ‘here is someone who’s getting a beer and happens to be someone who identifies as non-binary.’ So that’s my hope, to see them used a little bit more just in day-to-day images of people doing daily things.” 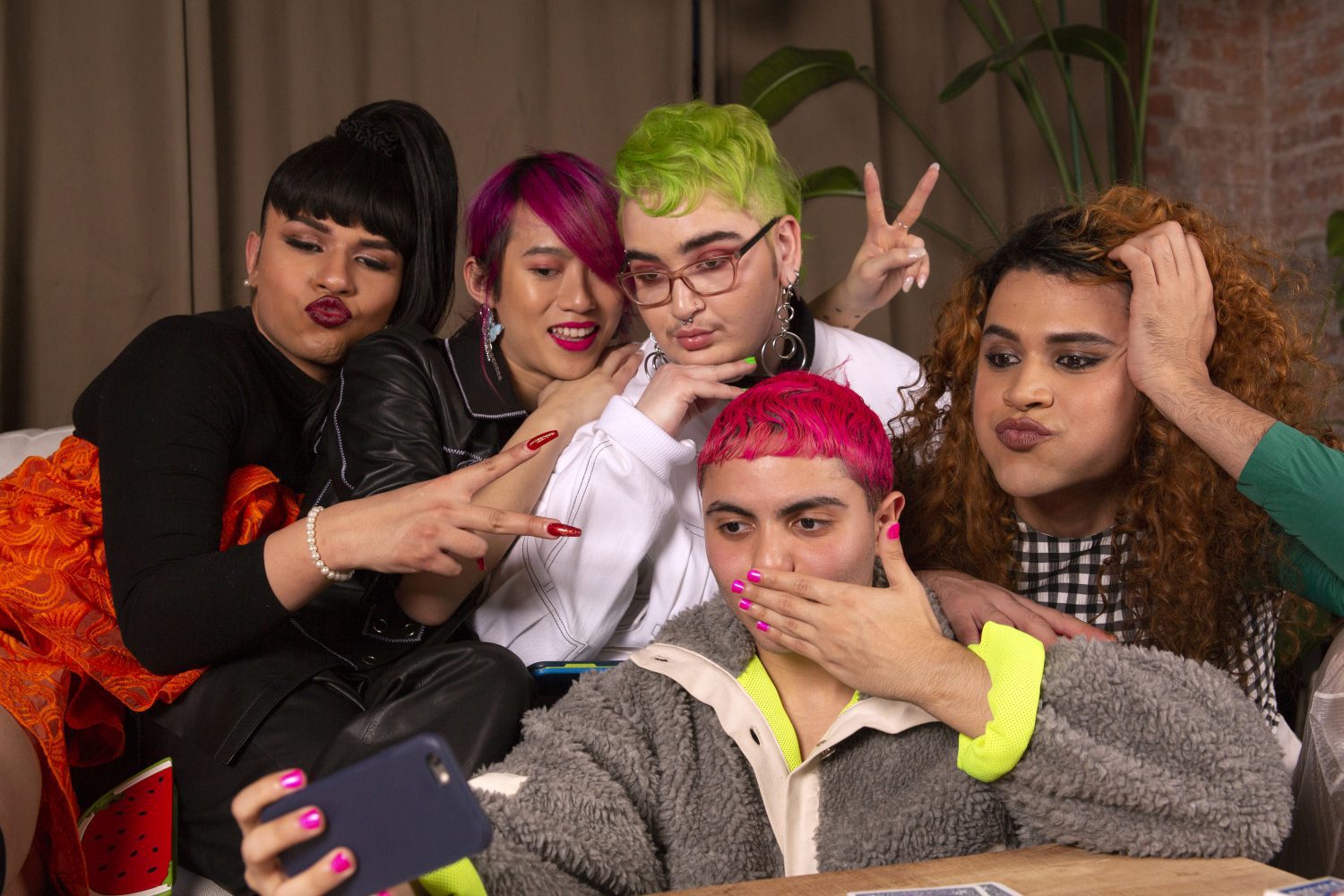 Amid the positive response following the first set of images, Schrupp and Burke said they are currently considering shooting another round of photos to add to the site. This is, in part, to be “more inclusive in terms of age ranges and also disability,” Schrupp said.

“We see and know that there are so many more images that we could’ve made, that we would’ve loved to have made if we had the capacity, because there’s so many different realms and so many different gaps in terms of photo representation,” Burke said.

In the meantime, Burke said she’s excited to begin using the photos herself.

“Clearly we want this as a resource for all media companies and it’s been really exciting to see editors tweet, ‘Oh I just sent this to my whole design team,’” Burke said. “But at the same time, this is also a project that we just also personally as journalists have been really wanting to see, and so that’s why we made it. And we’re also just really excited to use them across Vice as well.” 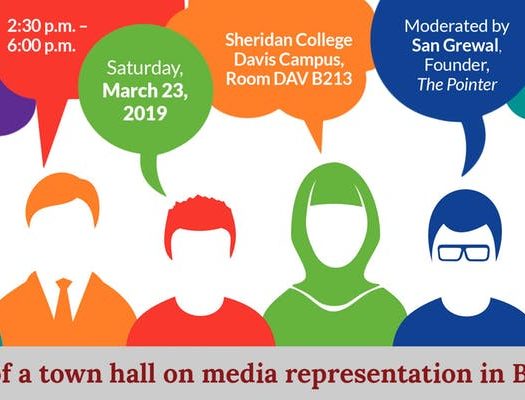 What’s the cost to Bramptonians when the media does not represent the...

What’s the cost to Bramptonians when the media does not represent them? 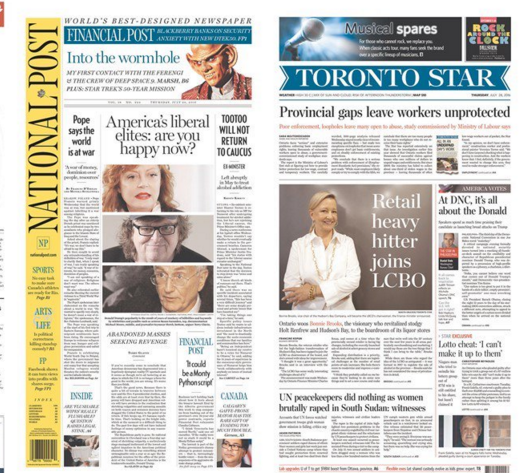 Welcome to Canada: Abdirahman Abdi & the selective silence of Canadian...