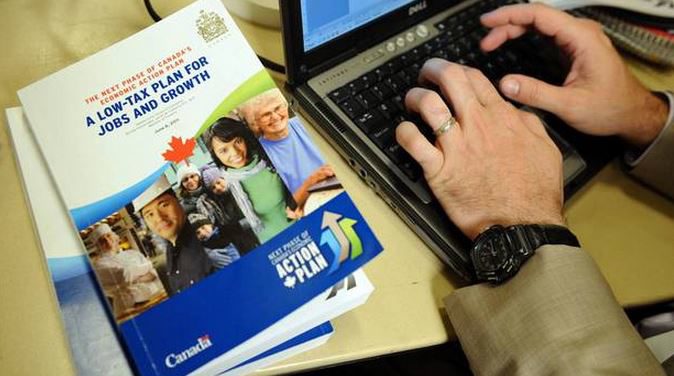 With the federal budget upon us next week, Ellen Russell, a journalism professor at Wilfrid Laurier University and former senior economist at the Canadian Centre for Policy Alternatives in Ottawa, offers her tips for journalists preparing to break down the budget  and find the real stories within the government’s slick talking points.

Imagine you’re a journalist deprived of access to the Internet and telephone while being relentlessly exposed to sanitized material prepared by a slick communications team. No, it’s not Dante’s inferno—it’s a budget lockup. But you can survive this journalistic wasteland to create stories that are not PR pabulum.

Like any wilderness survival exercise, the trick to flourishing in the hostile environment of a budget lockup is preparation. With the federal budget season upon us, it’s not too early to think ahead. Perhaps the most important advice is that you must carry your survival supplies with you.

The nice folks at the Finance Department will insist that you have no communication with the outside world. Don’t even think of trying it: the RCMP monitors the building. Since Dr. Google will not make house calls during a lockup, keep a running checklist of all the stuff you might want to have with you before you leave civilization. Here’s what I pack for covering the federal budget:

1. PDFs of past budgets. You will want to know exactly what the government said it was going to do in previous years. Sometimes the advertised objectives of government programs morph in interesting ways over time.

2. If you are expecting some funny business on a certain topic, bring whatever you would normally consult to track the government’s fancy footwork. Previous press releases, speeches, etc., on this topic are a goldmine if your guess is correct and the government does reverse or contradict itself on some matter.

3. Be prepared to follow the money. Often, really good stories are uncovered when something doesn’t pass the financial sniff test. I load as much financial information on my laptop as I can think of. But if I had to travel light, I’d at least have the Fiscal Reference Tables. They are fast and easy to use, and as a special bonus, the past few tables compare key aspects of Canada’s finances with those of other G7 countries. To monitor changes in the government’s assessment of its finances, you will need the most recent Economic and Fiscal Update. Some folks consult the Fiscal Monitor for monthly snapshots of federal finances, but I’d be cautious about this source. Government revenues and expenditures are unevenly distributed throughout the year, so mid-year results in the Fiscal Monitor are not always a clear-cut guide to where government finances will be by year’s end.

4. Bring in other people’s stuff. You are probably reading widely to prepare for budget day, so throw in this material. I always have budget commentaries from the major banks (check out their economics departments for their stash of research), as well as anything from the Parliamentary Budget Officer. I also download my favourite research from think tanks and non-governmental organizations. Don’t overlook some really great blogs such as 3D Policy and The Progressive Economics Forum.

Now that your digital backpack is bulging, how can you make the most of this gear in the intense time pressure of a lockup? I suggest that you lay the foundation for your story long before budget day. Try to anticipate the big stories. And since the Finance Department will be working overtime to drive you toward the stories it prefers, you’ll need to be ready to do a little digging.

My preference is to focus on stories that show up in the numbers. If you ignore the financials, you put yourself at the mercy of the conveniently packaged PR materials—not to mention the strategically orchestrated pre-budget “hints” dropped by the government. Numbers can be spun, too (like sausage, you don’t really know how they are made). But if the media don’t at least try to decode the numbers, the government controls the story.

This is not to say that you have to perform sophisticated financial analysis in the pressure cooker of a lockup. You can find powerful stories quickly—plus, you can arrive at the lockup with a lot of the analysis already done.

I prepare an Excel workbook with my budget analysis 75 per cent complete before budget day. For a federal budget lockup, I’d start by cutting and pasting stuff out of the fiscal reference tables and the most recent Economic and Fiscal Update into Excel. Choose the information you intend to focus on, of course. Then, I create some little formulas to perform calculations that will help me analyze these tables. For example, I might want to know the percentage change of certain budget categories over the years.

Once I arrive at the lockup, I insert the most recent information into my pre-formatted spreadsheet. This gives me an instant picture of how the government sees various budget categories evolving in the future. If something has changed in the government’s assessment of its finances, this will jump out of my Excel sheets quickly.

Then, I start pondering. If the government’s forecasted finances have changed, can I see a plausible reason for that? If the forecasted finances seem unchanged despite recent economic developments or new policy directions, does that seem reasonable? Is a particular budget category growing or shrinking in an unaccountably large or small way (or staying the same when it seems reasonable it should be changing)?

Budget deficit or surplus numbers are always a focus of attention. The Harper government will need substantial future fiscal room after the budget goes into surplus if it is to afford the various tax cuts that it has signaled it hopes to implement. To see where these surpluses are supposed to come from, I go straight to the all-important “Summary Statement of Transactions” (Table 3.3 of the last Economic and Fiscal Update, Table 4.2.4 in Budget 2013).

To make comparisons when time is short, I rely on the government tables expressed not in dollars but as “percentage of GDP.” GDP ratios strip out a lot of the confusion since you don’t have to worry about inflation. If the government doesn’t make significant changes in taxation or expenditures, revenue/GDP and expenditure/GDP ratios should stay roughly constant over time.  Large changes in these ratios suggest future policy changes.

Based on the government’s view in the 2013 Economic and Fiscal Update, it looks like the growing surplus projections after 2015/16 are largely generated because expenditures as a percentage of GDP are projected to fall. Look further down to Table 3.5 (“Outlook For Program Expenditures”) and you will see that the government is attributing most of this to a hefty decline in direct program expenditures relative to GDP. So, the Finance Department is expecting the relative size of government programs to shrink far into the future.

Does the government present a credible plan for how it intends to continue to produce falling program expenditure/GDP long after the budget goes into surplus? If the government is going to cut further programs to fund future tax cuts, Canadians ought to know what they will be asked to give up in order to pay for those tax cuts.

Fortunately, being in a lockup is a golden opportunity to explore your story ideas further.  The Finance Department “briefers” circulate throughout the lockup to answer questions.   They know a lot (many of them have been involved writing the budget), and what they don’t know, they will find out pronto. If they can’t (or won’t) answer your question, you may be sitting on a story.

Since I don’t often get Finance Department staff at my fingertips, I often arrive at the lockup with some questions I’d like answered. After all, there will be further budget stories to be will be written in the coming days, so more background on a potentially hot issue is always helpful. I also like to inquire about details that are bugging me. For example: just how much does the government figure it will save by the changes to Old Age Security? Look at previous budgets or other public pronouncements for assertions that the government hasn’t substantiated. If you want to know what evidence the folks at finance are working with, now is your time to ask.

If I had access to some Finance Department folks with nothing but time on their hands for a few hours, I might ask a couple of questions about the economic assumptions made in the preparation of the budget. It’s always possible that economic assumptions incorporated into the budget may prove wrong. In a nod to this possibility, federal budgets include estimates of the future budgetary impact if economic growth is slower or interest rates are higher than the government’s expectations (See Tables 3.6 – 3.8 in the Economic and Fiscal Update).

Other economic events might blow the budget off-course. Perhaps you are intrigued about the relationship between commodity price changes and future budget surpluses/deficits. Does the Finance Department run an analysis on the budgetary impacts of changes in, say, oil prices or other commodity prices? Surely the Finance Minister is considering the future implications of Canada’s heavy reliance on commodities. If he isn’t, we all should be alarmed.

I admit that a budget lockup is not the ideal place for any journalist to do deep thinking.  This works to the advantage of governments that know that many journalists will be forced to rely on the glossy communications materials. But with a little advance preparation, even those of us who would not want to be caught dead without an internet connection can emerge from the lockup with a story worth telling.

Ellen Russell is an assistant professor in the digital media and journalism (formerly journalism) program at Wilfrid Laurier University’s Brantford campus and occasional columnist on Rabble.ca. Previously, she was a senior economist at the Canadian Centre for Policy Alternatives in Ottawa.