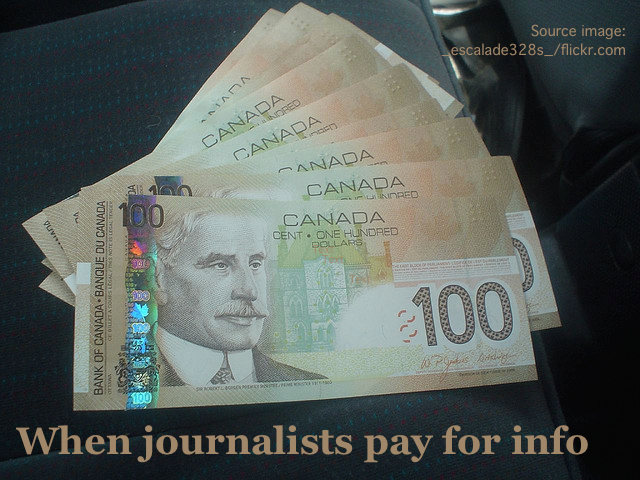 It’s clear that newsrooms, in the age of social media and ubiquitous video, would not be well served by a document simply explaining why payments should never be made.

Canadian media outlets have opened an account for chequebook journalism.

A fixture in other countries’ media scenes, the notion of paying for information is relatively new, and still rare, in Canada.

But there have been several high-profile examples, two centreing on former Toronto mayor Rob Ford. Those incidents set the ethics committee of the Canadian Association of Journalists on the path of examining the ethical implications of paying for information.

The risks are many.

Fundamentally, payments to sources threaten to replace journalistic rigour with a business transaction. Paying for information carries the peril of creating a market for purchased news—and of tying the newsroom’s interest to the (expensively obtained) information.

Neither of those outcomes are good for journalism.

Nevertheless, the committee quickly veered away from a thou-shalt-not approach, even though the CAJ’s own ethics guidelines prohibit the practice—albeit with a large caveat that would allow for payments for video and photos, deemed to be distinct from “information.”

It was clear that newsrooms, in the age of social media and ubiquitous video, would not be well served by a document simply explaining why payments should never be made.

In fact, I’d myself been peripherally involved in such a payment, as an editor at the Globe and Mail at the time when the news organization purchased still images of a Rob Ford video in 2014. I wasn’t involved in the negotiations, but I was involved in how the images would be presented to the public. So instead of simply proclaiming the problems with potential payments, the authors of the ethics committee’s report—Ivor Shapiro, chair of Ryerson University’s School of Journalism, and myself—took the approach of constructing a framework that newsrooms could use, in a practical way, for case-by-case assessments of what is acceptable, and what is not.

The framework looks at five factors:

The ethics committee affirms its recommendation in the CAJ guidelines that journalists generally should not pay for information, but rare exceptions may be warranted when the social/public interest is particularly high.This is when the considerations above come into play.

We welcome feedback on this report, which can be sent to ethics@caj.ca.