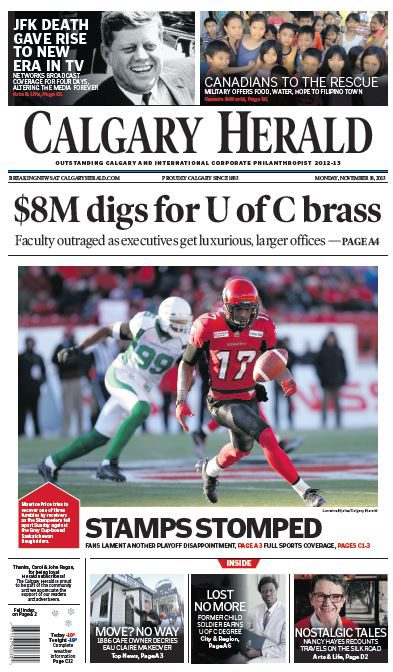 As the Calgary Herald moves to a full-colour and slimmer print format on Monday, editor-in-chief Lorne Motley calls the move from in-house production the “end of an era.” The Herald’s parent company, Postmedia Network, put the newspaper’s printing facility on the market and outsourced production to TC Transcontinental Printing.

The Calgary Herald will be printed in full colour and have a slimmer format on Monday, the newspaper’s editor-in-chief, Lorne Motley, said in an online post.

The Herald’s parent company, Postmedia Network, put the newspaper’s printing facility on the market and outsourced production to TC Transcontinental Printing. Sixty jobs were lost as a result.

However, “the new presses will allow us to offer a more compact and easier-to-handle size, as well as colour on every page, something that was not possible on our old presses, which date back to the early 1980s,” Motley said. “The end of in-house printing at the Herald is the end of an era—and we are grateful for the hard work, care and diligence of our production crews.”

While the pages will be smaller, the Herald will retain its existing typeface and size. The new format will emphasize local news, make sports a “major thrust” of the Monday edition and merge the Entertainment and Real Life sections into Arts & Life. The Wednesday edition of the new Arts & Life section will feature food coverage, as well as the launch of Gastropost, Postmedia’s “weekly food missions for food lovers.”

Motley said the Herald’s newsroom, advertising and marketing departments will remain at 215 16th Street S.E., Calgary, while the building is put up for sale.

Postmedia will also put the Kennedy Heights printing facility for the Vancouver Sun and The Province up for sale in February 2015 and contract out the work or build a new plant.

In a post on its website, Communications, Energy and Paperworkers Union of Canada Local 2000 said “after two days of negotiations between Postmedia management and Local 2000, it appears highly unlikely that a new plant will be built to print the Vancouver Sun and The Province in house.”

The union said “the employment conditions the company has said it requires to build a new plant are too extreme for the union to accept.” According to the union, Postmedia would only hire a quarter of its current employees at the new facility and insisted on choosing which employees are asked to work there.

The union also took issue with Postmedia’s severance package, which it said was less than what the company paid out to employees in the 1990s when newspaper printing was moved to Kennedy Heights and it is also “substantially less” than what has been paid to in the recent round of newsroom buyouts.