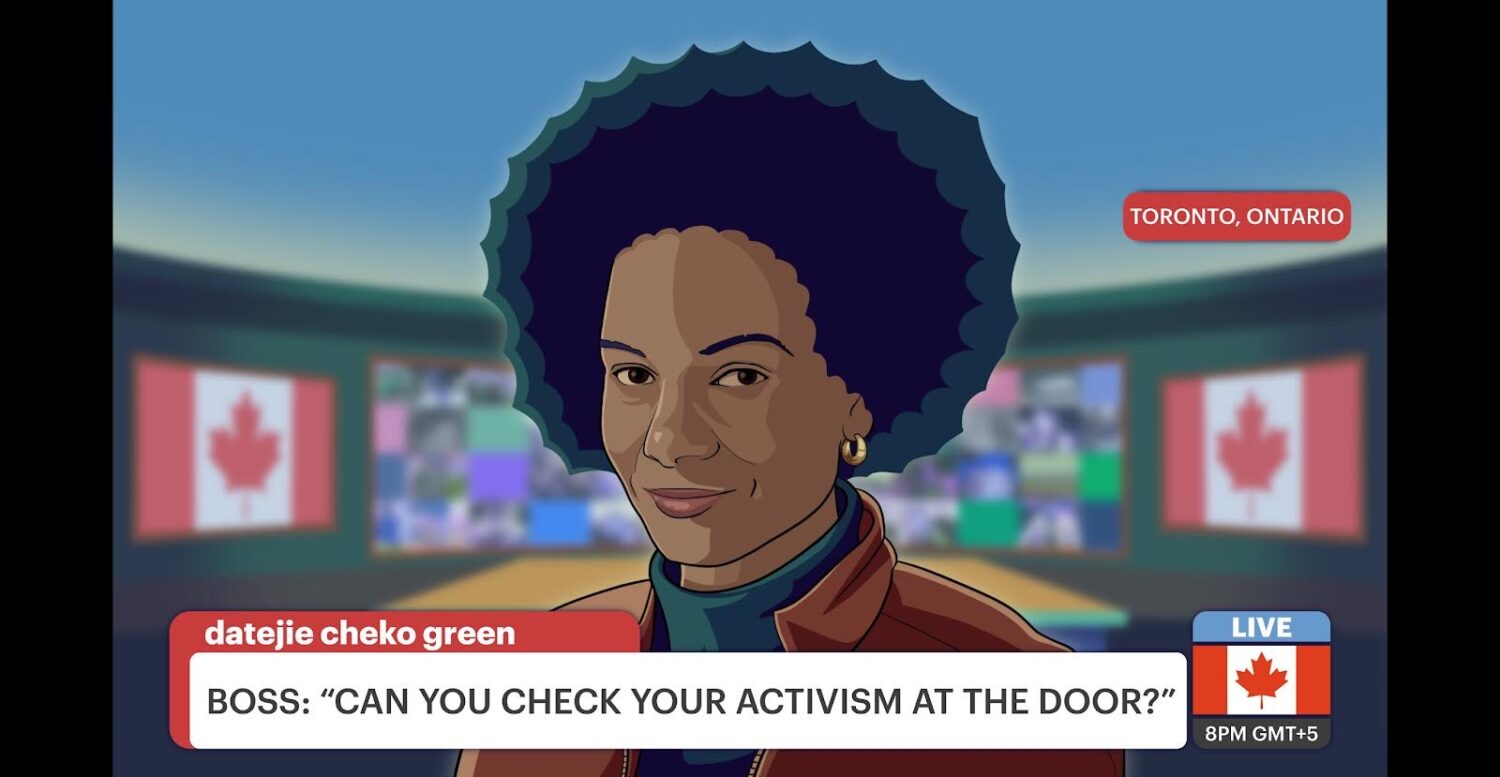 ‘Can you check your activism at the door?’: Under white supremacy, Black Canadian journalists see their very existence as a radical act

By datejie cheko green  •  10 months ago

As newsrooms globally respond to accusations of racial bias by focusing on diversity, journalist datejie cheko green looks to her experience in Canada to argue that a fuller reckoning of journalism practices, from recruitment to the daily meeting, is needed to make real change

“Can you check your activism at the door?”

This was how my white boss-to-be seemed to sum up my candidacy for a journalism position at the Canadian public broadcaster CBC in the 2000s. It came at the end of three long and very unofficial one-on-one hiring interviews.

I was thirty-something, a Jamaican-Canadian born and raised in rural Ontario, presenting with public-interest radio experience, a university degree, and a professional audio production diploma, both with honors. I’d lived abroad and was bilingual in English and French. I was a dozen years urbanized in Toronto’s vibrant, multilingual and multiracial communities.

I had little activist experience, unless people define “activism” as living in one’s own skin and saying no to the racism, sexism, homophobia and other discrimination we experience.

Even though discriminatory practices exist in Canada and are not acceptable under Canadian laws, I did not discuss them in my resume or during the hiring process.

For each job interview where it would have been normal to pitch one or two news story ideas, they required me to pitch dozens, including guest names and details for “adding diversity” to the public broadcaster’s flagship radio program. My pitches were very well received, but at the end of the recruitment process, my boss went back to my resume and questioned my Black-specific professional experiences, one by one.

“Why did you study for a year in Cameroon in 1990?” they asked me, quizzically.

“Why did you volunteer at an after-school program for Black children in 1993? And why in Scarborough?”

The program ran in a part of the city resettled by immigrants from the Caribbean, Africa, and Asia. It was one of many local education projects that Black people have historically created so their children can learn in culturally safe and affirming environments.  Their decades of organizing later resulted in the establishment of the Africentric Alternative School in Toronto in 2009.

I knew about Black children’s needs and their parents’ innovative solutions, but these were being held against me in this arena of a journalism interview. Behind the way my boss appraised my appearance, their eyes up and down my body, I expected the next question to ask about my locked natural hair. But what came was worse.

“Can you check your activism at the door?”

I paused, and calmly replied, “I am a professional.”

The next day I was hired.

The disproportionate scrutiny of my Black-centred choices was the first sign of the anti-Black-journalist distrust at the heart of Canada’s white-centred news industry. This treatment groomed me for their race surveillance of my professionalism before my job even began, and would reveal itself in the day-to-day micro-decisions of the newsroom.

In my dual role as studio director and story producer, I was directed to clean up the run of the program’s nightly live broadcast. I quickly succeeded, to the relief of the hosts and crew, and to praise from executives across the country who commended my boss, who then told me. Proof of my value, I thought, hopefully.

My other role was to produce interviews for daily broadcast selected in the morning story meeting, the most powerful newsroom ritual that feeds the editorial process.

Newsmaking revolves around this daily meeting to determine what is news, who is the audience, and the task assignment for who gets to produce which stories.

On our show, the meeting also functioned as an elimination round, evaluating each producer’s journalistic and “other value” to the program. This culture actively encouraged us to take comfort in the elimination of our peer’s stories as we advanced our own, and, therefore advanced ourselves. Most of my white colleagues embraced this. I couldn’t relate.

Out of a dozen on our team, I was usually the only Black person, intermittently one of two racialized people. As requested, each morning I pitched stories that addressed Canada’s racialized and marginalized communities, members of the same public whose tax dollars paid us all as journalists, though we were coached to visualize a ‘farmer in Saskatoon,’ a white man in the prairies, as our target audience’s persona, and his presumed interests formed our backdrop.

All at one time, I saw how journalistic practices created Black underrepresentation: as journalists, in news stories, and as audiences too.

My pitches addressed timely events related to politics and culture, and from local to international. My superiors acknowledged my stories as newsworthy, and sometimes praiseworthy, and then assigned them to my white colleagues to produce. As a consequence, I was robbed of my story ideas and the chance to produce them.

This is not the journalistic norm. It was a glass ceiling.

I had been hired to bring diversity “currency” to my white colleagues and the program, while they policed me to protect themselves against the “risk” of accepting my Black journalist perspective.

This became clear as I watched my show editors demonstrate implicit journalistic trust in my white colleagues, with some exceptions: the queer ones, the feminist ones, the class-conscious ones.

Most of them were entitled to make mistakes, and their receipt of guidance, whether requested or not, became no negative measure of their competence.

Younger, less experienced white producers hired months after me and my few racialized colleagues were assigned high-value stories and advanced through the ranks in relatively fewer weeks and a few short months.  They were rewarded especially for their loyalty to CBC’s trademark Canadiana.

Canadian nationalism as white-supremacy in journalism?

For generations, Canadiana has symbolized who and what is officially ‘Canadian,’ venerating narratives of hardy white settlers while denying these settlers’ subjugation of Black and Indigenous peoples. Journalists glorified British loyalists, and French descendants building the nation with their “own” sweat and labour, celebrating their foundational conquests of nature through canoe transport and the beaver pelt trade, glorifying white war sacrifices marked at Flanders Fields, Vimy Ridge, and Dieppe.

2020 was a turning point for Black-Canadian journalists. Until then, CBC and other Canadian news houses had faithfully promoted this worldview, aptly demonstrated in the 2020 commentary, “Canada is not a racist country” by the former host of CBC’s Cross Country Check-Up for more than two decades, Rex Murphy. The publisher was later forced to apologize.

Canada has promoted itself as an inclusive country globally, with white journalists informing and influencing what is “Canadian” and what is “Canadian-interest” to domestic and global audiences.

Black Canadians live this white supremacist narrative everyday. And Black journalists are expected to reproduce it, squeezed between the pressures from editors and the white Canadian audiences they prioritize.

White supremacy is embedded deep in the culture of the journalistic profession, governing what is “journalism,” and who is a “journalist,” one pitch, one story, and one broadcast at a time.

But this contradiction is being exposed. Canada’s right-wing political leader recently incited a campaign against journalists which targeted a Black woman reporter in the prairies most violently, all these years after I was coached to visualize a white man in that region as my priority target audience.

After decades of behind-the-scenes organizing for our survival, Black journalists are finally, collectively, cracking the facade of how this culture continues to marginalize us  in the name of professionalism, and in the service of a settler-colonial national identity, well displayed by our Prime Minister’s history of dressing up in Blackface.

We are organizing our own media spaces as we continue to build secure places for our bodies and our perspectives in the industry. Our goal is nothing short of the transformation of the profession itself as we labour to make it truly reflect the global public, to which we fully belong.

This story was originally published by Unbias the News, a feminist cross-border newsroom by Hostwriter seeking to actively fight against the perpetuation of racist, sexist, or ableist stereotypes. 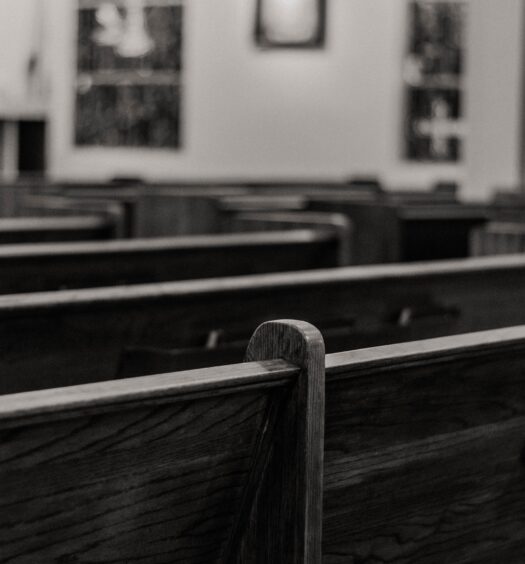 Black in the jury box: Media is the message

Read More
Black in the jury box: Media is the message 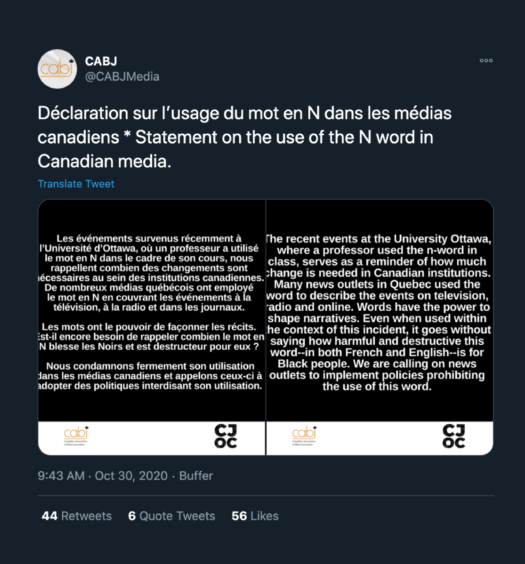