After dropping four places last year, Canada is once again in the top 20 nations in the 2018 World Press Freedom Index. However, concerns still remain over two high-profile battles to keep sources confidential, and the arrest of a journalist.

The 2018 World Press Freedom Index, released on April 25, 2018, placed Canada 18th on the annual ranking of nations. Number one on the list was Norway, followed by Sweden, Netherlands, Finland and Switzerland.

That marks an improvement from last two years, when Canada was ranked 22nd in 2017 in the index, produced by Journalists Without Borders (RSF). That was after a 10-point fall in 2016. Both Canada and the United States had slid down the index. “What we are seeing is that journalists’ sources are increasingly under threat, reporters are now facing jail time for covering protests, and verbal attacks meant to undermine the work of journalists are coming from some of the highest positions in government,” said the former executive director of RSF, Delphine Halgand in 2017, in a statement reported by The Canadian Press.

This year, Canada improved because of the passage of the Journalistic Source Protection Act, a shield law for journalists, and the recommendation of a Commission of Inquiry that Quebec should adopt better laws to protect journalists sources. “These improvements are the cause of Canada’s four point gain in 2017,” RSF stated in a press release.

However, the report still expressed concerns about the ongoing legal cases of Vice’s Ben Makuch and Justin Brake, now with APTN. Makuch’s final appeal will be heard by the Supreme Court of Canada in May, and Brake still faces charges. “Despite this progress, the fact remains that Canada has much work to accomplish ahead,” reported RSF’s report.

RSF said the World Press Freedom Index as a whole reflects “growing animosity towards journalists.” The United States dropped two points to 45th place, a result of President Donald Trump calling the media the “enemy of the American people.” 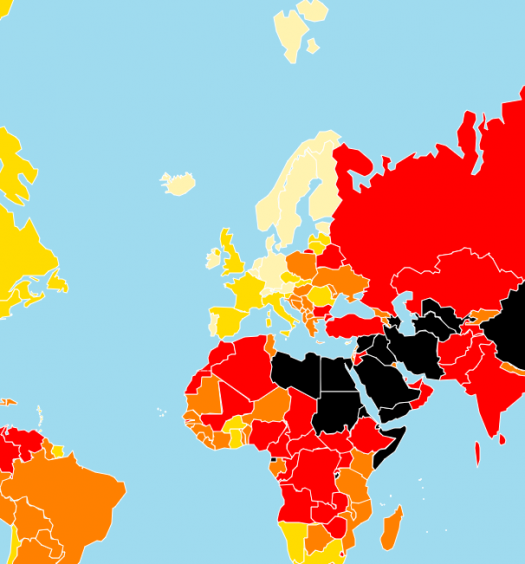