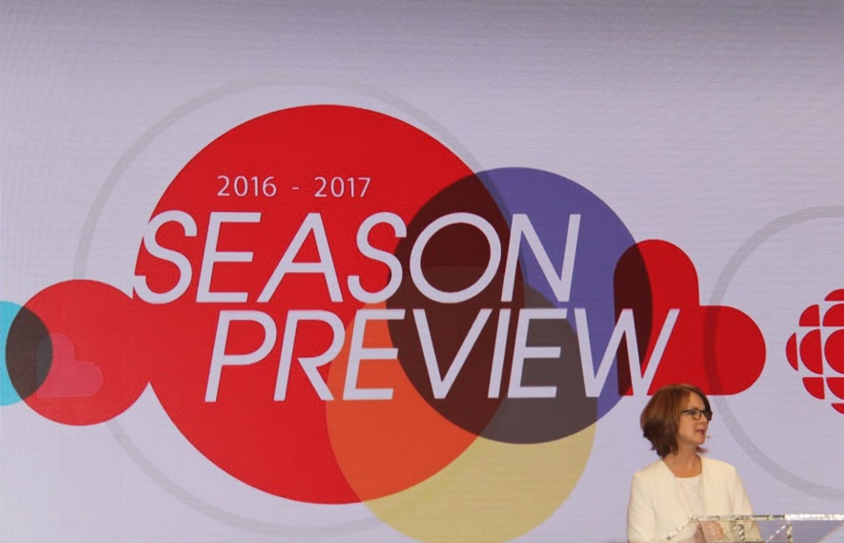 New program will take viewers behind the scenes of some of CBC’s biggest investigations, the CBC announced at its 2016-2017 upfronts.

The CBC has set itself a challenge for the 2016-17 season—to be seen as leaders in both breaking and investigative news online as well as in broadcasting.

On May 26, CBC announced its programming for the fall at the CBC building in downtown Toronto, which will feature original primetime entertainment, short-form digital documentaries, new radio shows and podcasts, and a new news program that will take viewers behind-the-scenes of some of CBC’s biggest investigations.

“I want us to be editorial leaders,” said Jennifer McGuire, the general manager and editor-in-chief of CBC News and Centres.

The broadcaster plans to inject new energy into existing programs, and expand its capacity for digital storytelling, with an emphasis on its obligation as a public service entity whose goal is keeping Canadians informed.

Competing in online space requires constant experimentation, said senior director of digital news Brodie Fenlon. While existing programming will need to adapt to a mobile-first audience, the quality, depth and core values of newsgathering are crucial to success.

“There’s no doubt that the most shared, most talked about, most clicked-on stuff is the stuff that is central to CBC News: investigative, original, enterprise journalism,” said Fenlon.

That sentiment, and the public’s curiosity about the behind-the-scenes mechanics of investigative journalism, underlies the premise of a new, yet-to-be named show slated for the coming season, hosted by senior investigative reporter Diana Swain.

“People ask me about it casually all the time,” said Swain. “‘What’s your job really like? What do you do?’

“If people are interested, then we should be telling them.”

Swain explains that while she and her small team are in the early planning stage, they know the program will unpack one of their best investigative reports of the week.

Aside from the suspense that the inner-workings of investigations can offer, Swain believes there’s a public trust function in demonstrating the process behind investigative work.

“I think that there is a problem with a lot of cynicism in the general public about journalists and journalism,” said Swain. “If we just tell people to take our work at face value, we’re never going to fix that. If we explain what we’re doing, people will go, ‘OK, now I get it.’ They might not always agree with every decision, but at least they’ll understand why you made it.”

While the exact digital strategy is yet to be determined, Swain said she and her team “want to find a way to do this show so that it doesn’t just feel like television. It’s got to feel a little more creative and a little more accessible than that.”

That dexterity to adapt to shifting platforms and audience expectations is at the core of future projects.

CBC News intends to be “quite aggressive” in being “future-focused in how we approach news,” said McGuire.

McGuire noted CBC has pursued successful data journalism projects, like the CBC News and CBC Aboriginal collaboration on the Missing and Murdered interactive database, which tracks the unsolved stories of missing and murdered Indigenous women in Canada, as well as seen the benefits of reporting across platforms in award-winning coverage like reporter Adrienne Arsenault’s stories on the Ebola outbreak in Liberia.

Knowing how effective that coverage can be, there will be a push towards “pop-up bureaus,” or temporary, short-term offices in specific countries that will extend the reporting presence beyond the “go in, go out” breaking news format, she said.

Programs like the fifth estate, CBCs flagship investigative show, demonstrate the value of digital agility, said McGuire. While the broadcast audience tends to skew older, the program has “incredible resonance on YouTube,” she said.

Local coverage is a key component of the digital expansion, including a digital and radio station in London, Ont., which will follow an existing model based in Kitchener, said Fenlon.

The challenge is “for us is to reach a new generation that’s not as brand-loyal, to any brand: CBC or any other,” said Fenlon.

New approaches to production follow. Live coverage and breaking news translate with relative ease in digital spaces, but the format of classic broadcast news will need some creativity to compete.

“We in news are spending a lot of time this year (and actually have already) thinking about digital treatments, and really blowing up the traditional television package: How else can we serve it up?” posited Fenlon.

He said CBC News has been working with these new modes, from experimenting with digital presentation like text over video to daily Facebook Live streams and “reporter-less treatments.”

“The sort of secret—the mystery—for CBC is that we do it. We do it a lot actually,” said Fenlon, of digital experimentation, “and we’re building audiences in those places where younger people tend to be.

“This month, we were named one of the top 25 publishers on Facebook in the English-speaking world. That’s a major deal. We’re the only Canadian [publisher] on that list,” he said.