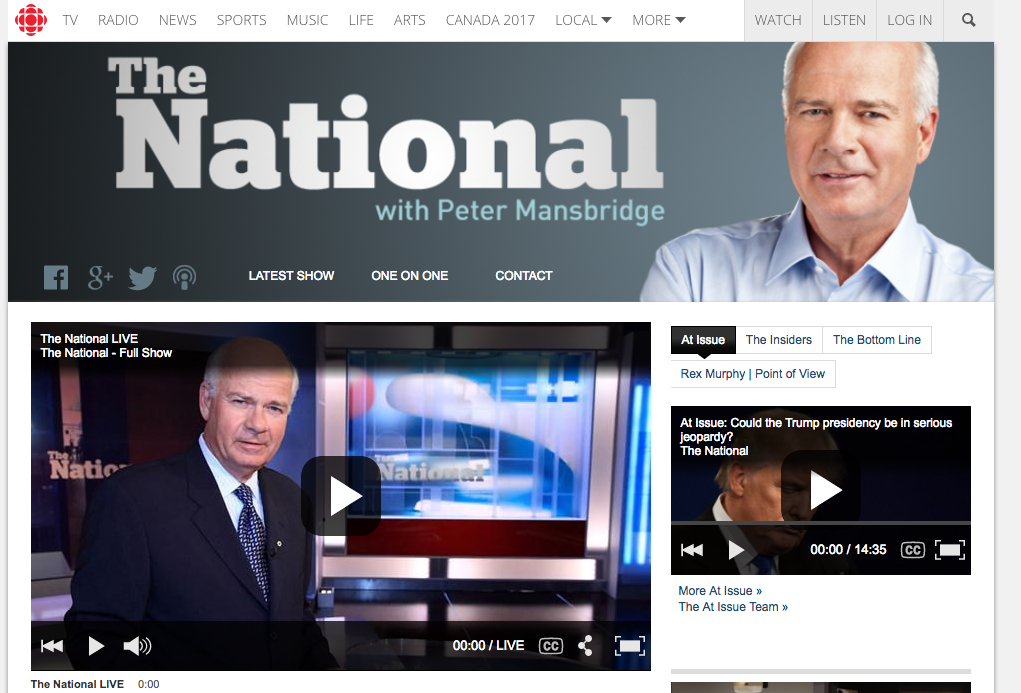 McGuire says Steve Ladurantaye, who stepped down from the managing editor position, will travel north in May.

At the CBC season preview on May 24, Jennifer McGuire, the general manager and editor-in-chief of CBC News, didn’t let too much slip about what the new iteration of The National would look like — only saying that they would not yet announce a new host.

There has been much interest in The National, not all of it speculation over who the new host will be. Steve Ladurantaye, a high profile hire for CBC in 2016, had recently been named managing editor of The National. This month, he left the position after publicly stating support for the “appropriation prize” offered by Ken Whyte on Twitter. The resulting controversy has once again brought to the fore the clear lack of diversity in Canadian media.

J-Source spoke with McGuire after her presentation at the season preview about what The National will look like when it reboots this fall, what will happen with Ladurantaye and how CBC is trying to become a more equitable workplace.

J-Source: I know you are not announcing any new host of The National yet. Is there a rough timeline of when we can expect that?

Jennifer McGuire: Peter Mansbridge is on the show until July 1. The new show will launch mid-October. I would say towards the end of June we’ll make announcements in terms of what the new format will be and who the talent will be.

J-Source: Intriguingly, Peter had said “hosts” at the season preview — is that in the running?

J.M.: Yes — I likely will land on multiple hosts. But don’t take that to the bank yet, because we are still finalizing format. One of the things that we are trying to do with the new show is frame it around working journalism, and so we want the ability to have people in the field doing stories without the show having to jerk one way or the other to accommodate that. I think we’re seriously looking at that.

J-Source: How greatly will this differ from The National everybody knows?

J.M.: The National has an incredible history and there are things about it that work incredibly well, so you don’t want to lose sight of that. And we did have a discussion at one point — should we change the name? CBC News has done that in the past with Primetime News. We decided no — it is The National, but we need it to evolve.

So how is it going to evolve?  It will be more digital than it is now. The National actually has huge digital reach but largely through distribution. You’ll see us do more digital native content. It will be continuous, digital presence going forward.

You’ll see us you maybe not touch as many stories and push depth a little more —  going a bit deeper on the story of the day, positioning the editorial lens forward more than we do now. Most nightly shows tend to touch the day that was and it becomes the show of record, and that’s important and we’ll still do that. But I think with a lot of issues we can push forward more than we do.

When we first heard the conversation around automakers not going to Mexico, for example, we covered the story of the day. It wasn’t until almost two weeks later where we unpacked the trade relationship and some of the things that were at stake. So I want the show to position forward sooner and more.

J-Source: I wanted to ask you a little bit about Steve Ladurantaye. In the memo that came out, you had said he was going to be meeting with different groups and working on some other projects. What does that actually entail?

J.M.: This is something Steve has volunteered to do.

From our perspective as a journalist, our policies are pretty clear: You can’t take a public position on an issue in the news and he did. It was a step over our policies for sure.

Steve at the head of The National, that would have been the conversation for the next several months. So we’ve given him another assignment for now and we’ll reassess in the fall. The assignment is real — he’ll be doing work with our content experience area, which is defining some of our digital strategies around The National and other things around our storytelling. So it is absolutely part of what we are trying to do, but it is just not the team.

J-Source: And so with the meeting other groups, is that within CBC or outside?

At the end of May he’s going up to a northern community with Michael Dick, who is our executive producer in Thunder Bay, and he’s seeing first hand a different perspective on the whole issue and the reality of what some of our Indigenous people in this country live. He volunteered to do this and we are supporting him.

The truth of the matter is we make decisions about perspectives every day as journalists. We say: this matters, this doesn’t. We do this story, we won’t do this.  What we are trying to do is as we better reflect the country is open that process up a little bit to understanding that there is no unilateral view.

J-Source: I wanted to ask you about the emerging leaders program you referenced in the memo. What does that program entail and how is that working at CBC News?

J.M.: So it’s beyond CBC News. We were were part of the catalyst that made it happen. At CBC we have employee resources groups of different communities of employees we have within CBC.

One of the things we heard from them is that while we do a pretty good job in terms of representation in terms of our public facing on air presence, we’re not diverse or as representative in leadership. So what the emerging leaders program is designed to do — and this is CBC writ large, it’s not CBC News — is give specialized leadership training to a group of high potential people. To give them the kind of formal training, leadership experience and mentoring to get them to be ready for these more senior jobs as they become available.

J-Source: The other program I wanted to ask you about was the unconscious bias program. How is that being implemented throughout the organization?

J.M.: Again it is a tiered thing. There is a piece that is going through our human resources department. We are participating in that for sure, but we are also looking at our editorial processes and seeing if, by the nature of how decisions get made, are we really being open enough to allow different perspectives to come through.

J-Source: Aside from those two things, are there any measures you are taking, especially after hearing the concerns of your staff after this controversy?

J.M.: We are absolutely engaged in active conversations with staff and had been previous to this. It is understanding, it is listening, it is looking at things you can change, both in terms of offering development opportunities and also looking at what it is about our processes that might be blocking more robust dialogue and reflection.