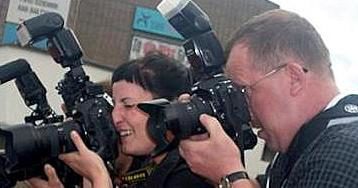 CBC ombudsman: A closer look at “fair dealing” is needed

Tyler Olsen, a photographer for the Chilliwack Times in British Columbia, had questions about CBC’s use of a photograph from his paper when they were covering a news story. He acknowledged it was allowed under a Copyright Act provision called fair dealing, but asked the CBC's ombudsman if the use of his photo was ethical, and what CBC’s practice is.

Tyler Olsen, a photographer for the Chilliwack Times in British Columbia, had questions about CBC’s use of a photograph from his paper when they were covering a news story. He acknowledged it was allowed under a Copyright Act provision called fair dealing. He wondered though if it was ethical, and what CBC’s practice is.

You wrote to express your concern that CBC News online and on television used a photo you had shot and published in the Chilliwack Times without your permission. The story was a “human interest” piece about a little girl who had been attacked by a pit bull and a chihuahua who played a role in her rescue.

When you contacted Andrew Yates, Senior Producer, Community, he explained that CBC chose to use the photo under the “fair dealing” provisions of the Copyright Act of Canada. He apologized for not having someone call to seek permission before hand. You thought that this was an “ethical breach” regarding the use of the material.

You thought that the use of “fair dealing” should depend on the importance of the story, not whether a rival news organization was able to match the story:

“…the use of fair dealing might be excusable when the story is particularly important or the images sufficiently rare. (Even then, it would be dicey; would one dare to not pay for an image taken by a photojournalist shooting in Syria?) Ethically, fair dealing should not be used when an attempt to record one’s own image fails…the use of the photo served simply to allow the CBC to match, at the top of its newscasts, stories by its two competitors.”

You felt that even if CBC News’s actions were within the letter of the law, CBC should take a principled position and set the practice for other media organizations, and you wanted the Ombudsman to weigh in on the subject:

“I think that as a public broadcaster that helps set the tone for much of the journalism that is conducted in Canada, the CBC needs to be leading the charge to protect and promote the hard work of this country’s reporters and photographers.”

“Fair dealing” is an exemption under the Copyright Act of Canada. It applies for the purpose of research, private study, education, parody or satire and news reporting. There are some conditions that must be met in order for the exception to apply in the case of news: the identity of the source, and if available in the source, the author, maker or broadcaster who owns the material. The Act does not define “fair.”

While this is not a new practice or concept – it has been tested in the Supreme Court of Canada – it has become highly relevant in a world of aggregation of content on the internet as well as the practice of sharing through a variety of social media sites. Copyright in general is a hot topic.

Although you asked me to comment on CBC’s fair dealing policy, the complaint followed the process laid out in the Ombudsman’s mandate. Jennifer McGuire, the General Manager and Editor in Chief, responded to you after a lengthy delay.

She pointed out that CBC News’s use of the photo fell under the exemption outlined in the Copyright Act. She added that the CBC credited the Chilliwack Times in the print version of the story. She also said it is not always “practical, especially in light of today’s busy newsrooms and 24-hour news cycle,” to seek permission in each case where “fair dealing” applies:

“Your email raises a number of issues about the way the Act is applied and its effects. While I understand your concerns – and I realize the legislation has been the subject of some controversy – we can only act in accordance with its provisions. Our journalists make every effort to do that and to do it in a way that we hope is fair to everyone involved.”

CBC News covered this story online and on television. The news team in British Columbia obtained interviews with the little girl’s grandmother and visuals of the area where the attack took place, but no images of the little girl. The reporter supplemented the material obtained by taking a photo of her post-injury, holding her dog, from the Chilliwack Times web site. The cbcnews.ca story gave the source. The television story did not. It is important that CBC News act consistently across all its platforms and ensure that all news staff are aware of the requirements when using material used under fair dealing.

To continue reading this review, please go the CBC ombudsman’s website where this review was originally published.