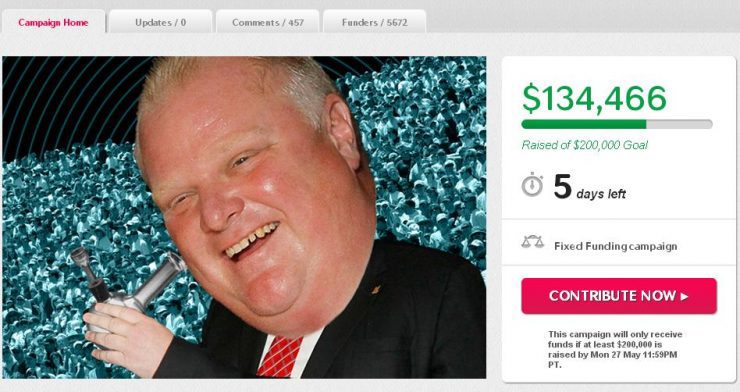 Most news organizations have strict policies to not pay for the news. But he question is: can a case be made for public interest that makes paying for the alleged Ford video justifiable? Toronto Star columnist Rose DiManno wants her newspaper to pay for the alleged Rob Ford video reasoning that if the Star doesn’t, the video may be bought by people who would prefer to let it disappear for good. The Province in Vancouver also launched a crowdfunding campaign to access the alleged video. Edward Tubb reports.

A major politician smokes crack-cocaine, and does it on video – even as a hypothetical, it’s difficult to think of a more tantalizing, or potentially damaging, news tip.

Of course, this hypothetical is real.  Or a least the Toronto Star and the American gossip website Gawker.com say that it is real. Both reported last week detailed descriptions of a video they say shows Toronto mayor Rob Ford inhaling from a glass pipe and speaking incoherently and offensively.

But, there’s a catch: the alleged drug dealers who have the tape want to be paid tens – perhaps hundreds – of thousands of dollars to release it. Because of this, there are challenging questions about journalism ethics that have rarely been debated openly in this country. The question is: can a case be made for public interest that makes paying for the alleged Ford video justifiable?

“It’s not happened before in Canada in my experience,” says Klaus Pohle, former managing editor of the Lethbridge Herald and associate professor of journalism at Carleton University. He says it goes against Canadian standard of news ethics. “But, there’s an exception to every rule,” he says.

Pohle says the public has great interest in knowing once and for all if the mayor has engaged in criminal activity, something that seemingly can only be verified by viewing the video. “I wouldn’t pay,” he says. But, “The Star might have to close its eyes to the ethical conundrum and buy the video,” he says.

That’s what Star columnist Rosie DiManno thinks should happen. She called for her publisher to  buy the tape – reasoning that if the Star doesn’t, the video may be bought by people who would prefer to let it disappear for good. To deal with traffickers is unethical, she wrote, but in these circumstances to buy the video is “not illegal, not immoral and definitely justifiable.” Indeed, for the scandal to move forward, some news organization likely needs to pay up.

“Chequebook journalism may be dicey,” she wrote “but there are times, rare instances, where the end justifies the means.”

The Star’s Newsroom Policy and Journalistic Standards Guide clearly states the newspaper does not pay for information. For its part, Gawker has every intention of buying the Ford tape. And, the site has a lot of supporters. As of Thursday, more than 5,000 people – and counting – have pledged money to help the website buy the video from the alleged drug dealers. As an incentive, the first hundred donors over $150 will received a Canadian flag signed by Gawker owner Nick Denton. Those who donate over $200 will get a hand drawn print of mayor Ford smoking crack-cocaine drawn by the Gawker’s art director. “I’m a bit disconcerted by this stuff,” Pohle says.

Gawker editor John Cook said in an interview with CTV Tuesday morning that paying for tips is not new for Gawker, though the price for this video is “extremely high.”

“We have a reputation for paying for video and photos and that sort of thing,” Cook said, reasoning that this reputation may have influenced the sources’ decision to contact Gawker in the first place.

The site’s crowdsourcing campaign – dubbed “Crackstarter” in a pun on the online fundraising organization Kickstarter – passed $100,000 in donations late-Tuesday night, a number that is climbing steadily. Pohle says this campaign is concerning. “[Gawker] obviously has a different sense of what ethics are than… the majority of editors and media owners,” he says. The campaign “illustrates the difficulty when you talk about ethics,” he says. Though it is acting against established journalistic norms, Gawker clearly has substantial public support. At the current rate, the campaign is on target to hit its $200,000 goal by its deadline this weekend with time to spare.

Gawker’s original report on the tape reported the alleged drug dealers said a Canadian news organization had offered $40,000 for the tape, but this remains unconfirmed. On CBC television’s The National on Friday, Star reporter Robyn Doolittle said that she and her colleague Kevin Donovan tried to obtain the tape without paying over a period of about six weeks. “The Star has never made an official offer for [the tape],” she said.

Last Thursday The Vancouver Province also started its own crowdsourcing campaign to get access to the video. “We were responding to a demand that was clearly out there,” says The Province’s digital news editor Erik Rolfsen in a video message explaining the paper’s reasoning.

*Video courtesy of The Province

In the video, Rolfsen calls the campaign “an experiment,” and says it was partly meant to gauge the public’s reaction to crowdsourcing.

“We’ve long had a policy that we don’t pay for news. In this case, we will not be paying for news. We have not donated a cent towards our campaign. We’re simply giving people who want to pay for it a venue to do so.”

Gawker’s fundraiser rapidly overshadowed The Province’s and the Vancouver daily’s campaign is no longer active. The decision to crowdfund for this video came with sharp rebukes over social media, including a blog post by former Star editor John Gordon Miller, who called the campaign a “low point in the recent history of yahoo ethics at Canadian newspapers.”

Hugo Rodrigues, president of the Canadian Association of Journalists says “Canadian journalism isn’t a culture that pays for information.”“It’s just not part of our fibre.” Like the Star, the CAJ’s  code of ethics prohibits paying sources with few exceptions.

“There are checkboxes that can make the purchase of a video clip legitimate,” Rodrigues says, giving examples of news organizations paying nominal fees for tapes of conflict zones or natural disasters from known and verifiable sources. “Bu this case does not meet those standards,” he says.

Likewise, the CBC, the BBC, NPR, the L.A. Times, and the New York Times and many other news organizations have codes of ethics that say journalists should not pay sources for information. As for why, the New York Times’ code puts it bluntly: To pay for unpublished documents would “create an incentive for sources to falsify material and would cast into doubt the genuineness of much that we publish.”

To pay tens of thousands for the Ford video “would be buying the material at a valuation that takes it out of news-value territory and into the realm of exclusive-buying,” writes David Studer, Director Journalism Standards and Practices at the CBC in an email interview. He says this case is different from times when news organizations may legitimately pay for authenticated content. In those, the prices involved reflect the cost of shooting or time and effort and “the sums involved are generally quite nominal,” he writes. “The CBC doesn't participate in chequebook journalism,” he says.

Yet for the Rob Ford tape to see the light of day, someone will have to participate. If Rosie DiManno gets what she wants, that will be the Star. J-Source asked publisher John Cruickshank for a response on DiManno’s request, but has yet to receive an answer.

“I want to see the video,” she writes in her kicker. “Ethics shmethics, boss.”

Edward Tubb is a freelancer and soon-to-be graduate of the Master's of Journalism program at Ryerson University. He's currently writing about source protection and tobacco farming.