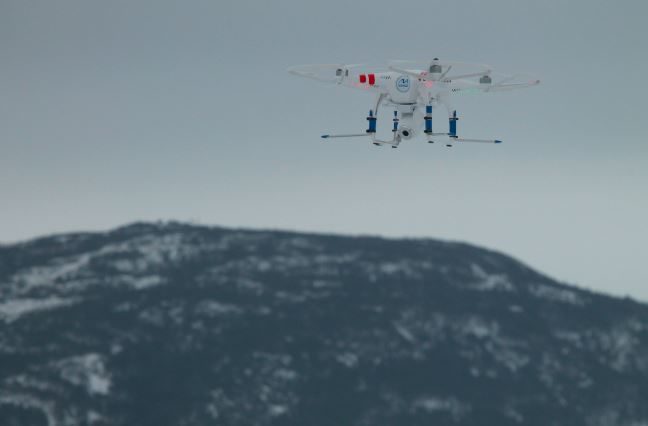 Considering the unique vantages drone journalism can provide, losing this technology due to a lack of professionalism would be a serious blow to our industry, writes College of the North Atlantic journalism instructor Jeff Ducharme.

Journalism is often slow to adopt new technologies, but if we are to survive and thrive, then we must embrace new technologies. And as journalism educators, we have to be ahead of the trends, not playing catch up.

The use of drones is part of that journalistic evolution. At College of the North Atlantic, our journalism students have taken to drone technology. They understand its limitless possibilities as well as its pitfalls.

Currently, there are four post-secondary institutions in North America involved in some form of drone journalism. In Canada, students at Langara College, in Vancouver, and College of the North Atlantic, in Newfoundland and Labrador, will be responsible for moving this technology forward and proving its worth to industry, regulators and, more importantly, the public.

The day will come when drones are common in the media, so student journalists must be taught how to respect the technology and operate drones safely and responsibly. It is incumbent on us to show society that we can operate drones without jeopardizing the public’s privacy or safety.

That is what led me to creating a Drone Code of Conduct—the first for a journalism school in Canada. The public has reservations about drones, or unmanned aerial vehicles, buzzing above them, and so they should. We need to prove that we can operate such crafts in a responsible, safe and unobtrusive manner. I hope that the points mentioned in the code and our observance of them will reassure the public.

The creation of the Professional Society of Drone Journalists, led by industry pioneers Ian Hanna and Matt Schoyer, was a critical first step. Anyone operating a drone for news-gathering purposes should be a member of the society. Developing a relatively in-depth code of conduct is just a natural progression in the professionalization of the technology.

The code also addresses issues that, because of current Transport Canada regulations, are not yet an operational reality, such as flying drones outside of your sight range. That being said, the regulations are expected to change eventually.

One day, journalists using drones will be no different than using news helicopters, but the reality is that, for the most part, it will involve more self-regulation than government-led regulation. We can’t wait for the change to happen and then just dive in. We must be prepared for the shift in regulations and get it right from the start. Having a code will help the industry operate in a professional and consistent manner.

The code doesn’t address everything, and it will evolve with the technology and the challenges we face as drones become more common.

There are many questions still to be asked and challenges to be faced. For instance, when 10 drone journalists descend on a scene, how will that be dealt with? For that matter, can it be dealt with? With many drones operating on the same frequency, how we will avoid and address signal contamination? Even the potential of a drone signal being hacked will become critical to drone journalism and its survival. Drones have gone rogue, and the potential for damage and injury is substantial.

A code of conduct is only a minor step and my hope is that journalists across the country adopt it or some form thereof, or develop their own in-house document and put it into practice. Considering that a drone can present viewers with epic vistas, previously unattainable data and never-seen-before perspectives, losing this technology due to a lack of professionalism would be a serious blow to our industry.

Jeff Ducharme is a veteran journalist with more than 20 years working in the newspaper industry. He is currently a journalism instructor with College of the North Atlantic in Newfoundland and Labrador.