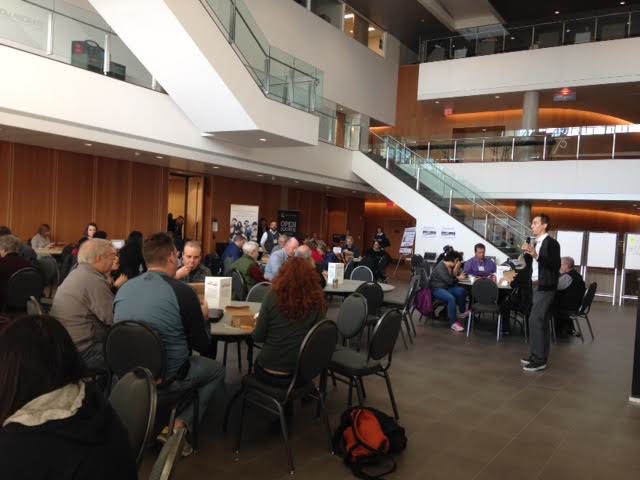 Participants at the Community Media Convergence discuss how to support their activities in advance of CRTC review of local and community broadcasting in 2016.

Community media practitioners are preparing for a David and Goliath encounter with Canada’s cable giants when the CRTC’s review of local and community broadcasting gets underway in January.

“Community broadcasting was not originally conceived of by regulators. If anyone should be in the driver’s seat, it should be Indigenous communities and community (broadcasting) practitioners,” said community radio researcher and broadcaster Gretchen King, speaking at the Community Media Convergence, held Nov. 22 to 24 in Ottawa.

The gathering was organized by the Community Media Working Group, a newly formed coalition of cross-platform media makers and researchers. Attracting participants across the country, from Hay River, NWT, to Toronto’s Regent Park, the event marked the first time community-based TV, radio and digital media makers have come together for strategy discussions.

At issue is a special levy imposed on Canadian cable companies, put in place to ensure local and community-access programming was protected after the companies were allowed to expand and consolidate their markets in the 1990s.

Under the system, cable providers set aside between two and five per cent for community channels, which are supposed to air at least 50 per cent local programming produced by community members.

However, the cable giants themselves control the fund and are known to play fast and loose with definitions of “local” and “community access,” according to various independent audits, including a 2011 review by the Canadian Association of Community Television Users and Stations.

The CRTC acknowledges the problem in its submission call, which notes “it is possible that in many cases certain communities will not be exposed to specifically locally relevant or reflective programming through the traditional broadcasting system.”

Interviews and focus groups conducted by the working group in September found Canadians in general value community media as a source of local information and engagement and wished funding was applied to more platforms than cable television.

Multi-media community access centres that would invite public access and training for everything from radio broadcasting to community-friendly game creation were among the suggestions discussed by convergence participants.

Meanwhile, community media operations struggle just to keep the doors open and the lights on, according to the working group’s study. Ninety-eight per cent of the 419 survey respondents identified stable funding as the number-one policy issue facing their sector.

“The issue is political power,” argued panelist Emmanuel Madan of the Independent Media Arts Alliance. “Handing over cable rights was like giving away Canada’s gold. How do we force the CRTC to act on behalf of the 99 per cent, not the one per cent?”

“The CRTC is going to have to undo the mess that was made of community media policy.…Let’s update the legislation because initially it was set up for another industry not (the cable) industry,” said King.

CACTUS executive director Catherine Edwards called on the CRTC to pay more attention to people who actually make community media. “The solutions don’t work unless you ask the communities what they want and give them the power to manage the solutions,” she said.

The CRTC hearing begins on Jan. 25 at 9 a.m. at Conference Centre in Gatineau, Que.