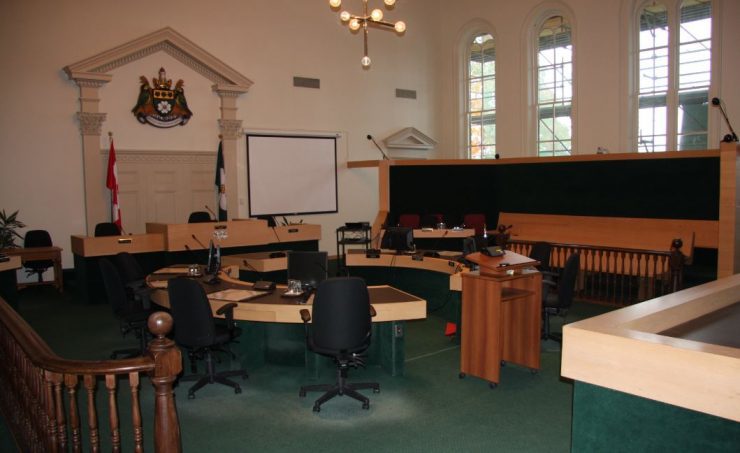 Covering council: how to survive as a rookie reporter

Municipal politics can be a tough beat to cover, especially for a new reporter. Katie Starr, the council reporter for Norfolk News in southwestern Ontario and recent graduate of Western University’s journalism program, offers her tips to get through it all.

Municipal politics can be a tough beat to cover, especially for a new reporter. Katie Starr, the council reporter for Norfolk News in southwestern Ontario and recent graduate of Western University’s journalism program, offers her tips to get through it all.

Every Tuesday, I spend anywhere between four (on a good night) to six hours covering county council meetings. As a young reporter at my first non-internship “real job,” I’m still getting the hang of this. But along the way, I’ve picked up some useful tips for reporters new to covering council.

1) Council meetings are marathons, not sprints

You would be amazed at how long councillors can debate the mundane minutiae of, say, rooftop solar projects or road repairs. So, go prepared with the right attitude. Get plenty of rest the night before. Yes, I’m serious: council meetings are late nights for everyone, but keep in mind you also have to head back to the newsroom to type up at least a couple of briefs before your paper goes to print.

Eat a solid meal about an hour before and don’t be afraid to bring snacks—just make sure they aren’t loud, distracting, smelly or awkward to eat. So, nix the wrappers, chips, curry, hardboiled eggs, tuna, carrot sticks, turkey dinners…you get the idea.

At first I was afraid to eat during council and would end up with horrible stomach cramps by the end of the night. But then I started noticing other people taking surreptitious snack breaks, and I realized it was okay to show your human side and admit you’re hungry. Just be respectful about it. Occasionally there will be a 10-minute recess if the meeting is stretching into the late hours of the night and I find that’s the perfect time to bring out a snack.

My favourites? Almonds, homemade granola bars (chewy, not crunchy, and wrapped in noise-proof cling wrap), a small pot of yogurt, pre-peeled clementines or dried fruit. Aim for some protein and complex carbs for lasting energy—you’ll need it.

2) Show up early and dress the part

Maybe this is a “well, duh” piece of advice, but don’t underestimate it. Get to council 20 minutes early and pick out a good seat. There’s usually a media section that gives you a clear view of the action, but keep in mind you could still have hearing and visual problems. Sometimes there is only a limited number of seats for the media, so you want to get there before everyone else shows up and you’re left having to awkwardly balance your laptop or notepad in your lap while crouching behind them.

Showing up early also gives you the perfect opportunity to say hello to the mayor, councillors and staff. I wouldn’t use this time to fire questions at them, but a smile and a “how are you?” can go a long way in building up relationships and rapport.

And dressing the part? That should be “well, duh.” You’re a professional. Look like one.

Print off the council agenda (they’re typically posted online the day before the meeting) and read through it to get a sense of what potential hot-button issues could come up. Read the attached PDFs of staff reports for a further understanding of what people will be discussing.

I only started doing this a few weeks into covering council and—at the risk of sounding hyperbolic—this changed my life. All of a sudden I was no longer sitting there blind, wondering what everyone was talking about. I’m not going to pretend like I always understand what’s being discussed, but at least I have a general sense. Plus, it’s reassuring to know you have all the numbers and statistics right there with you, so you don’t have to furiously try and catch all the numbers people throw out during their presentations.

Unless you know shorthand—my political reporting prof did, which is a skill I’d love to have—typing is probably your best bet when covering council. A lot is said and often very fast and with a lot of mumbling, so typing is the easiest way to get as much information down as I can. I wouldn’t suggest relying on a recorder, because then you have to go back and listen to it all over again (and believe me, sitting through one council meeting is rough. Sitting through the same one again would be worse than being forced to watch an all-day marathon of Keeping Up With the Kardashians).

That being said, bring a back-up. Have your laptop battery and cell phone charger with you, but also always throw in your notepad and a pen and pencil (pencil in case the pen runs out of ink). Not only do you never know if your laptop will die, but if you have to slip out of council and chase someone before she gets to the elevator, you’ll want your notepad to jot down her quote. Plus, no matter how slim and light laptops and iPads get, nothing beats an old-school, coil-ring steno pad. You just feel more like a reporter with one.

5) Don’t be afraid to admit you know nothing

Look, maybe your hobby is reading up on rated capacity water systems versus firm capacity. That’s cool. But mine isn’t. So when this came up in council the other week, I really struggled with it. Council talks about some pretty dull and difficult things that the average person—i.e., me, with my extremely limited science, math and business background—grapples with. Not to mention all the bureaucratic jargon and gobbledygook council and city staff love using.

It’s our job as reporters to listen to all of this, try and make sense of it, then translate and interpret the information back into regular English for everyone else. This isn’t easy, but no one expects it to be (whew!), so don’t feel bad about saying, “I don’t understand such-and-such. Is there a way you could explain this to me that would make it more clear to readers?”

It’s humbling and frustrating and there have been moments over the past month where I’ve wanted to simultaneously tear out my hair and berate myself for being an idiot. But be patient, ask various people lots of questions and remind yourself you aren’t stupid. It’s easy to feel in over your head especially when this is your first job and everything is new, but have confidence in your abilities as a reporter to ask questions. That’s what we’re here for, right? People are expecting us to have questions, so don’t feel intimidated.

6) Take cues from other reporters, but trust your instincts, too

If all the other reporters are hastily writing away during a deputation from a member of the public or a presentation by staff, that’s probably a good hint that there’s a story here and you should be writing too. Don’t feel pressured to keep up with them, though. Different publications have different deadlines, space constraints and audiences. For example, one reporter who sits next to me at council writes for the paper in Port Dover, Ont. His readers aren’t typically going to be interested in a story that’s all about Simcoe, Ont., so he doesn’t write anything down during that discussion.

Also don’t be afraid about going with your gut. A reporter’s instinct is a powerful thing, so if something’s telling you to stay at council long after other media have left, stay. What will you lose, besides precious sleep? You’ve already come to terms with the fact that you’re never going to be home in time to catch your favourite show anyway. Who knows? You just might scoop everyone else.

7) Don’t ever be the first reporter to leave

This applies not just to covering council, but any story. You don’t always have to be the last one standing, but it never hurts and could pay off. Tenacity and patience are two of the biggest skills reporters can cultivate.

8) Make friends with other media

OK, I know I just touted the joy of scooping other news organizations, but I’m not totally bloodthirsty. We’re all in this together, after all, and although healthy competition is a good thing I’m not an advocate of anything nefarious—we’ll leave that to the politicians we’re reporting on.

Seriously, make friends with each other. This will make boring council nights at least marginally more enjoyable. When you can turn to the guy on your right and double check a figure with him, or when you can both snort with suppressed laughter at something (yes, there are occasionally moments of mirth when covering council), that’s a good thing. Or when a reporter comes back with a tray of Tim Hortons coffee and tea for everyone, it makes it easier for everyone to get through the night.

Friends make everything better and this goes double for council meetings.

Seasoned council reporters, what advice would you add to this? I’d love to hear it.