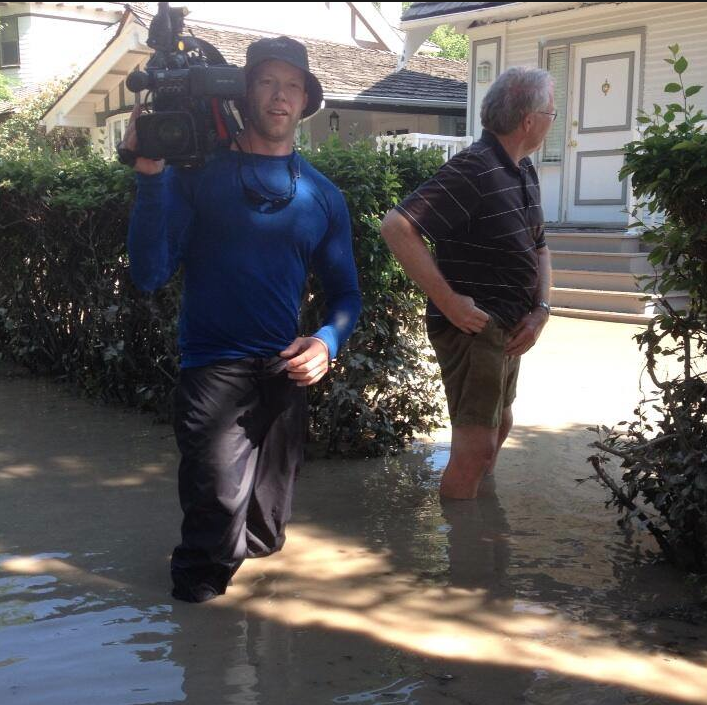 Trying to improve your storytelling or looking for some tips on how to kick your camera work up a notch? Look no further than Canadian Broadcasters—a Facebook group created by two photojournalists that's crowdsourcing constructive critiques. Simon Jones explains why.

Trying to improve your storytelling or looking for some tips on how to kick your camera work up a notch? Look no further than Canadian Broadcasters—a Facebook group created by two photojournalists that’s crowdsourcing constructive critiques. CTV photojournalist and Canadian Broadcasters founder Simon Jones (left, reporting during the Alberta floods in June 2013) explains why.

Being a member of the Canadian media can be hard. Just getting your foot in the door for a first job is a daunting task. Working your way up through the ranks while developing your skills and knowledge? I’ve heard several people say the light isn’t shining so brightly at the end of the tunnel.

These obstacles inspired the creation of the Canadian Broadcasters Facebook group.

After passing a number of messages back and forth in September, Martin Weaver (a fellow photojournalist at CTV Edmonton) and I decided to build a forum oriented towards storytelling and skills development in broadcast journalism.

Martin and I have both been longtime members of Storytellers, a group which is mostly influenced by American photogs and reporters who post their stories for feedback and share tips and tricks of the trade.

We felt that although Storytellers is a terrific resource, the Canadian media has a different set of challenges and structure that warrants its own group. So, we built the page, opened up the group, and had 50 members within the first 30 days, which was quite a surprise.

The other driving force behind creating the page was a set of similar experiences that Martin and I have had. We’ve both attended NPPA (National Press Photographers Association) workshops south of the border in the past year, and learned a lot about the American side of things.

They have a very large, competitive market, and as such the standards are set pretty high for creative storytelling. The infrastructure to support this type of competition and help people advance their careers is much more pronounced; institutions such as the NPPA and Poynter’s News University regularly have workshops and seminars across the country for this purpose.

Obviously, with a much smaller market in Canada our resources are a little more limited, and those types of large organizations simply don’t exist. Hopefully we can fill a small part of this gap through a free forum that allows people to interact and share their work with others.

When you look at the demographics of people that have joined so far, it begins to make a little more sense. The majority of our members are young professionals or aspiring students; they’ve got that hunger and drive to get over the hump and improve. But they also have the desire to be a part of a community that can share in the ups and downs of our industry. That’s exactly what the group is for.

Martin has gone to the trouble of finding a weekly story and tip that embodies the best elements of Canadian storytelling, and the group is always quick to respond (in a constructive way) to anyone who wishes to post their stories.

If we can serve as a conduit for Canadian journalists to discover Storytellers, and at the same time help anyone in advancing their skills, I think we’ve accomplished what we set out to do.

Simon Jones has been a photojournalist at CTV Calgary for six years. He is a graduate of the Journalism New Media program at Sheridan College and has an Honour’s degree in History from the University of Guelph. You can follow him on Twitter @CTVSimonJones.