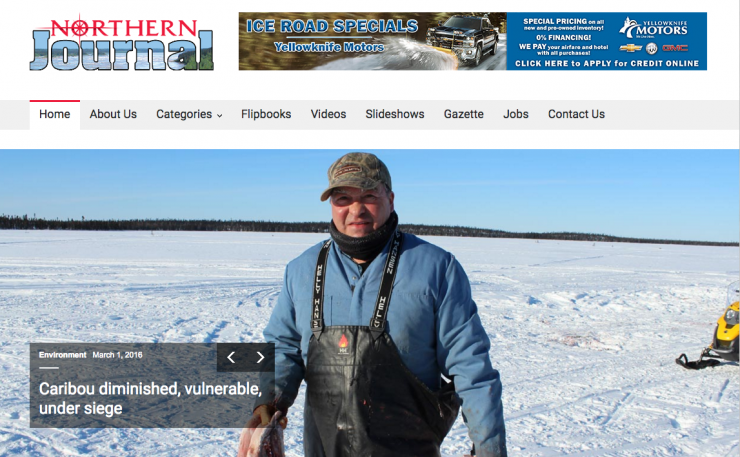 Death of a newspaper by a thousand cuts

Two weeks ago staff at the Northern Journal were served notice the print edition could no longer be sustained.

By the Northern Journal Editorial Board

Two weeks ago staff at the Northern Journal were served notice the print edition could no longer be sustained. This week’s issue will be the last, the newsroom terminated – at least as it exists now in Fort Smith.The online edition will be continued in some form, but it too will need revenue to carry on. The Journal meeting was depressing. Jobs were lost and our national award-winning newspaper, sustained in a small NWT town for 40 years, was being shuttered.

It was a necessary business decision. The cost of wages, printing, freight and other expenses had outstripped revenue. The move of major advertisers away from print media, particularly the loss of GNWT advertising, with the economic downturn piled on top, were a perfect storm.

The Northern Journal had diversified into different markets, but many community entrepreneurs say they don’t need to advertise or are using social media, and only a few businesses remain loyal to print media. Neither the Alberta NDP nor the new federal Liberal government has sorted out how they will communicate programs and initiatives, and advertising budgets remain frozen. Many of the big players in the oilsands industry withdrew advertising from the Journal some time ago as a result of our coverage of health and environment issues around Fort Chipewyan and Fort McKay, but the crash in oil prices took away the rest. The biggest financial hit, impacting all NWT newspapers, has been the reduction in advertising by the NWT government.The Northern Journal likely could have been sustained if it moved to Yellowknife, a bigger commercial market with direct access to GNWT managers. Operating in a smaller community, however, is always more challenging.

Newspapers create jobs, contributing to the economy. Calculate federal transfer payments based on the number of newspaper industry employees and the direct cash allotment to the GNWT last year exceeds the amount of money spent by all departments on newspapers advertising, and the amount continues to decline in 2016. Add in other taxes and money spent on living expenses that bolster local economies, and the direct benefits from the newspaper industry in the NWT far exceeds the cost of advertising. Why would the GNWT, which says attracting new residents to the NWT is a priority, reduce advertising expenditures and eliminate those jobs? The GNWT has de-funded the newspaper industry in the NWT, and in so doing is losing money. It makes no sense.

Whatever the financial math, we prefer that newspapers were valued and supported for the multiple services they provide to Northern communities, particularly journalism, which has an important role in keeping society informed, robust and free. Seventy years ago newspapers were respected as a cornerstone of democracy. Today that seems largely forgotten. Newspapers have provided a central point for the dissemination of information and a critical part of that involved building credibility and respect over time – reliable, proven, accountable sources. The role of a “newspaper of record” – getting the facts right, providing information from “official sources,” dispelling rumours – has been important. That need still exists, but has no equal in new media.

Multiple sources of information have grown up, making the field of media rich and diverse, but now a crunch has come and newspapers are the current victim. Online news sources, the CBC, plus Facebook and Twitter will fill the need, but will it be done as well? Note that online news sources are also not supported with secure revenue streams, so they too will be vulnerable.

The devices we carry are a portal to limitless information, but what we get through them often lacks scrutiny and in some cases is purposefully biased, supporting a cause or ideology. That can be hard to discern in an online world where scams and deception are a new normal. Social media, by nature can have a fragmenting effect on our society. For example Facebook is a tremendously effective resource for connecting groups with a common purpose, but the communication is targeted, the groups closed, and so isolated from the broader community. Oddly, many people –  including highly-placed government administrators – use only social media to get their messages out now, and do not recognize or understand that limitation. Our society is changing rapidly, including how it connects, or doesn’t. The implications of that have not been thought through. They need to be.

The Journal has had a good run and although it may become a notch on the belt of history, its loss offers a lesson. A world without multiple, competing, comprehensive news and information sources, particularly one with a limited number of dedicated journalists, is a step backward. It is not wise to try to hold back the hands of time, but protecting what is important and valuable when the way forward is unplanned and unguided is not only a good idea, it is essential.

This story was first published by the Northern Journal, and is reprinted with their editor’s consent.