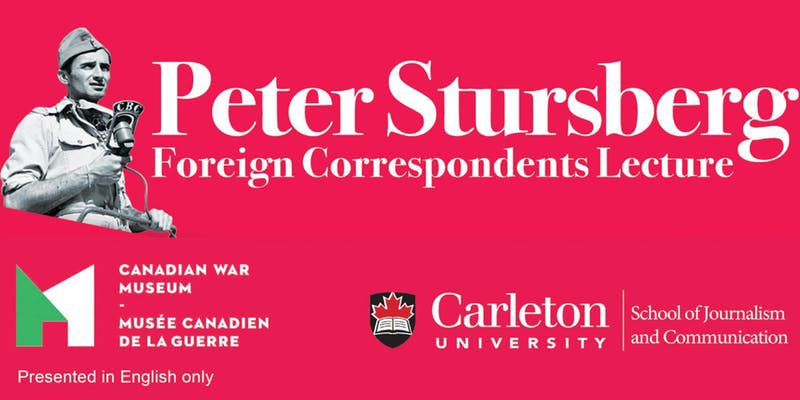 The third annual Peter Stursberg Foreign Correspondents Lecture will be delivered by the CBC’s Adrienne Arsenault, award-winning senior correspondent and a host of The National.

Her lecture – “The New Frontline” – will draw on her extensive experience covering conflict and security issues nationally and internationally.

Arsenault’s career with the CBC has included postings in Vancouver, Washington, Jerusalem and London.

She was named the Commonwealth Broadcasting Association’s Journalist of the Year. She has also won two Gracie awards for outstanding female correspondent, a Monte Carlo Festival award for her coverage of the Zimbabwe election and several Gemini and Canadian Screen Awards.

Kristy Kirkup (BJ 09), a parliamentary reporter with The Globe and Mail, will moderate the evening. Before joining the Globe, the award-winning journalist worked for a number of major news organizations, including Sun Media, the CBC, CTV and The Canadian Press.

Carleton University’s School of Journalism and Communication, through the generosity of Richard Stursberg and Judith Lawrie, established the Peter Stursberg Foreign Correspondents Lecture in 2017.

It recognizes the importance and impact of journalism that bears witness in troubled areas around the world, and will be delivered annually by a correspondent with sustained experience reporting from conflict zones.

The inaugural lecture was delivered in 2017 by BBC’s Chief International Correspondent Lyse Doucet.

The School is pleased to collaborate with the Canadian War Museum to offer the Peter Stursberg lecture.

As Canada’s national museum of military history and one of the world’s most respected institutions for the study and understanding of armed conflict and its effects, the Canadian War Museum is the ideal venue for this informed discussion, and exploration of conflict, past and present.

The lecture will be presented in English only.