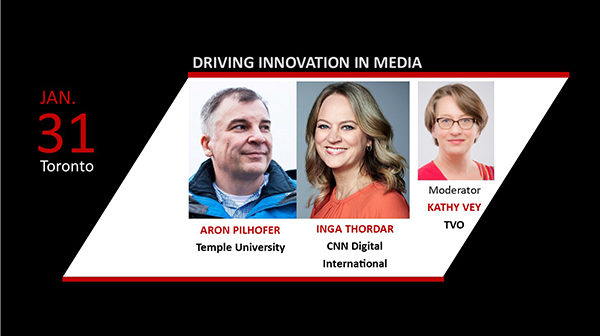 In journalism today, the only constant is constant change. The need to innovate is greater than ever before, as powerful new tech tools alter the way we connect and communicate.

Join two of journalism’s top innovators and changemakers in a discussion about the challenges and opportunities in driving news innovation. Aron Pilhofer is the James B. Steele Chair in Journalism Innovation at Temple University in Philadelphia. Earlier, Pilhofer was a reporter for the New York Times and executive editor, digital at The Guardian. Inga Thordar is executive editor of CNN Digital International, overseeing all international news, sport and programming teams. Previously, Thordar was a senior editor on BBC World, responsible for TV and digital production teams around the globe.

The conversation will be moderated by Kathy Vey, executive producer of digital with TVO.