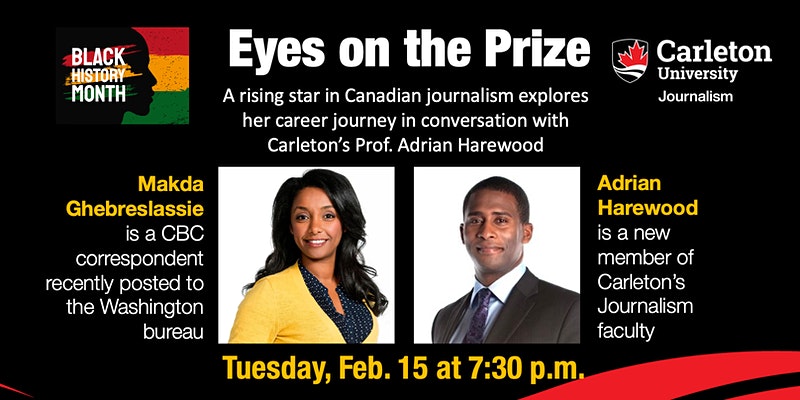 Eyes on the Prize – a conversation with CBC correspondent Makda Ghebreslassie

Before her appointment to the CBC’s Washington Bureau this summer, Makda Ghebreslassie was a CBC Video-Journalist, who also filled in as TV news anchor and a host on Here and Now and Fresh Air. She has worked in newsrooms in Sudbury, Sault Ste. Marie and Windsor before moving back home to Toronto.

The child of Eritrean immigrants, she entered the news business at the ground level and learned valuable lessons at every step. Her first jobs were in community cable outlets in Richmond Hill and Sudbury, Ontario and then a reporting gig with the local station in Sault Ste Marie. Makda found success as a journalist was built on trust, on relationships, on getting people to tell their stories. And she proved very good at it.

Her CBC career began with a VJ position in Windsor followed by four years reporting in Canada’s largest news market, Toronto. This led to a very fruitful turn as a Marketplace host. But her passion for daily news remained strong. When a network reporting position opened in Toronto last year she jumped at it.

Along the way, Makda has collected multiple awards and honours. She’s also won praise for her ability to reach into communities and make connections. A recent example was her strong reporting on the ground in Minneapolis during the Derek Chauvin murder trial.

With close family ties to the United States and experience having worked in two border cities, Makda has a solid grasp of Canada-U.S. issues. In this new role in Washington, she will handle much of the CBC’s early-in-the-day reporting for platforms such as News Network and World Report plus special assignments.

Makda is looking forward to covering the American story in all its complexity including “the chance to connect with marginalized communities, and seek out the stories that are often not told.”

Adrian Harewood is an Associate Professor in Carleton’s School of Journalism and Communication. During a transitional period, he has continued to serve as co-host of CBC News Ottawa. Harewood attended elementary and high school at Ashbury College in Ottawa and was involved in community radio at CKCU (Carleton University) and CHUO (University of Ottawa). He has been a guest host on national CBC programs such as As it Happens, Sounds Like Canada and The Current. Before coming to television, Harewood was the host of All In A Day on CBC Radio One in Ottawa.