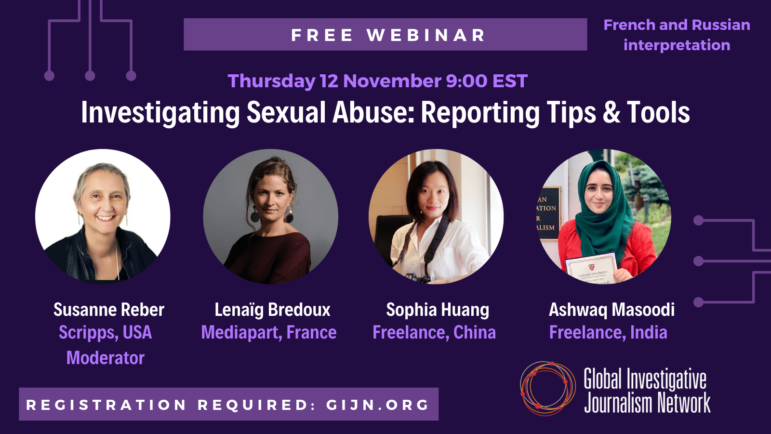 The use in 2017 of #MeToo as a hashtag following the Harvey Weinstein sexual abuse allegations, investigations by journalists, and the ever-louder voices of women have amplified the age-old issue of sexual abuse and put it firmly on the global agenda. Investigating sexual abuse is difficult and requires not only the rigorous standards of investigative journalism, but additional skills to deal with the trauma of survivors.

To register for GIJN’s webinar Investigating Sexual Abuse, please go to this site.

This GIJN webinar, Investigating Sexual Abuse: Reporting Tips and Tools, will focus on investigating cases of sexual abuse that take place in times of peace, rather than in conditions of war or mass conflict. It will not look at intimate partner violence or domestic abuse, but will focus on how to investigate patterns of behavior and institutional negligence or complicity.

Globally the statistics are depressingly similar: cases of abuse are mainly by men against women, most are never reported to authorities; the level of convictions is low; and studies indicate a very low incidence of false claims despite hype by some media and public officials. In addition, the subject of sexual violence remains a sensitive if not taboo subject in much of the world, and often goes unreported. Watchdog journalism has started digging deeper into sexual violence, but these investigations are still few relative to the estimated number of cases worldwide.

In this global GIJN webinar we bring together three journalists from France, China and India who have substantial experience in investigating cases of sexual abuse. They will share their strategies and reporting tips, ranging from collecting evidence to how to deal with survivors and their families during and after the investigation.

To accompany this webinar, GIJN will be publishing a new tipsheet on investigating sexual abuse.