Journalists Facing Mean Tweets: What It Means for Our Democracy 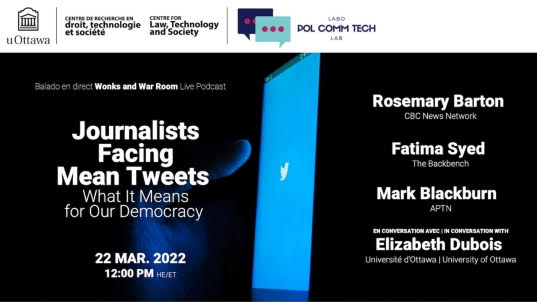 The Pol Comm Tech Lab presents, in collaboration with the University of Ottawa Centre for Law, Technology and Society:

What It Means for Our Democracy

Join us for a conversation with Rosemary Barton, Fatima Syed and Mark Blackburn to discuss online harassment, discrediting journalism, and what incivility means for our democratic systems.

In this special live recording of the Wonks and War Rooms podcast, political communication expert Dr. Elizabeth Dubois will discuss the situation with Rosemary Barton, chief political correspondent for CBC, Fatima Syed, host of The Backbench podcast (Canadaland) and vice-president of the Canadian Association of Journalists, and Mark Blackburn, online producer for APTN.

They will talk about increasingly toxic online spaces and tackle tricky questions: What can we do to cultivate civic engagement between individuals and news media? What counts as incivility and who is a troll? How can we encourage broad civic engagement while discouraging harassment? How do we create safer environments for journalists?

This panel discussion is a special live recording of the Wonks and War Rooms podcast in which the host, Professor Elizabeth Dubois, chats with political staffers, journalists, communications experts, lobbyists, activists and other political actors about the interface of politics and communications.

This event is also presented as part of the research lead through the Global Innovation Journalism Lab as well as the Mean Tweets project supported by the Social Sciences and Humanities Research Council of Canada.

Rosemary Barton is CBC’s chief political correspondent and an award-winning and long-time political journalist who has interviewed numerous high-profile politicians over her journalism career.  She hosts The National’s At Issue panel, co-hosts the weekly CBC podcast Party Lines and is the host of Rosemary Barton Live on CBC TV and CBC News Network.

Fatima Syed is a Mississauga-based journalist who has reported for the Toronto Star, National Observer and the The Logic. She is the host of The Backbench podcast (Canadaland) and vice-president of the Canadian Association of Journalists. Her reporting focuses on politics, climate, race and business. She is a Digital Publishing Award winner (Best Editorial Package), National Magazine Award finalist (Best Essay) and a National Newspaper Award finalist (Breaking News).

Mark Blackburn is an online producer for the Aboriginal People’s Television Network (APTN). Previously, he was the executive producer for the news in eastern Canada. Prior to joining APTN in 2009, he worked at CBC Radio and Television in Newfoundland and Labrador and Ottawa.

Dr. Elizabeth Dubois is an Associate Professor at the University of Ottawa where she runs the Pol Comm Tech Lab and is a Faculty member at the Centre for Law, Technology and Society. Her work examines political uses of digital media including media manipulation, citizen engagement, and artificial intelligence.