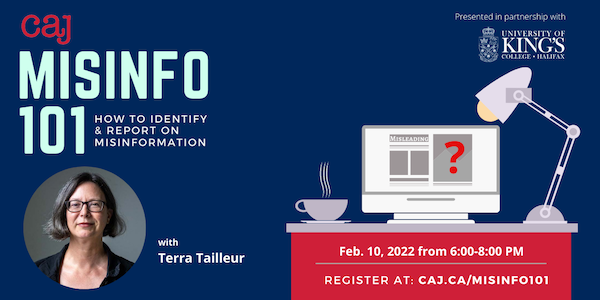 The second session in the CAJ’s national Misinfo 101 series is led by University of King’s College professor Terra Tailleur. This event is intended for post-secondary students living in Nova Scotia.

This two-hour workshop will cover a variety of practical tools for fact-checking and verification, as well as some of the ethical considerations when reporting on misinformation.

Terra Tailleur is an assistant professor at the University of King’s College specializing in digital news. As a journalism educator, she works primarily at the intersection of media literacy, digital literacy and storytelling. She spent 20 years in newsrooms, mostly with CBC. She’s on the CAJ’s ethics advisory committee and regularly advises journalists and communicators at large.