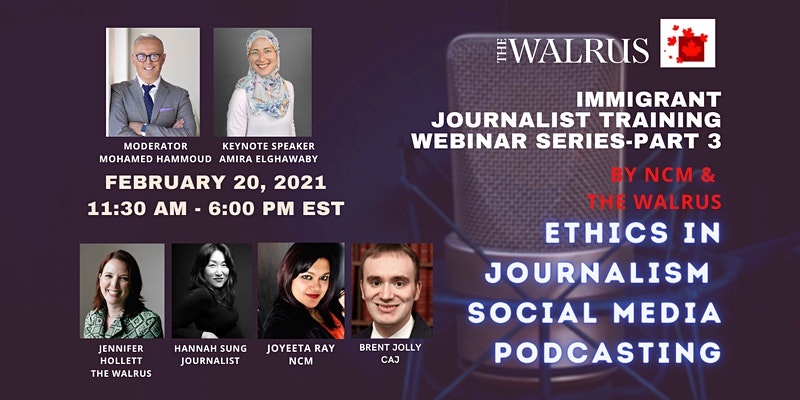 The third webinar will be held on Feb 20th, 2021, and features the following topics:

Amira Elghawaby will be present as the keynote speaker.

Live on Zoom
The meeting link will be sent upon registration
11:30 AM-11:45 AM: Introductions

About the speakers
Mohamed Hammoud is a dedicated and driven community leader and a consultant with expertise in community activism, leadership development, diversity, equity and inclusion, Mohamed understands the importance of diversity to sustain Canada’s prosperity and growth and regularly contributes to various media outlets, including the CBC, the London Free Press, Thrive Global, and BizCatalyst. An award-winning Toastmaster, TEDx and keynote speaker, executive coach and trainer, Mohamed has been recently appointed as the Chief Learning Officer to New Canadian Media.

Amira Elghawaby is a journalist and human rights advocate. She currently works in Canada’s labour movement. Amira is a contributing columnist for the Toronto Star and is a founding board member of the Canadian Anti-Hate Network.

Jennifer Hollett is the executive director at The Walrus, Canada’s Conversation. The Walrus is known for its award-winning independent journalism, fact-checking, and national ideas-focused events. Jennifer has worked as the head of news and government at Twitter Canada and is the co-founder of the fact-checking Super PAC App, which debuted at number one in the App Store. As an award-winning host, reporter, and producer, she’s covered stories across Canada and around the world with CBC News, CTV News, and MuchMusic. Jennifer has a master’s degree in public administration from Harvard Kennedy School and a BA with a specialization in journalism and communications from Concordia University. Fun fact: her first job after Concordia involved answering emails for Céline Dion.

Brent Jolly is the director of communications, research, and community management with the National NewsMedia Council of Canada (NNC). Prior to joining the NNC in 2016, Brent worked as a journalist with a variety of news outlets as both a writer and editor. In addition to his work with the NNC, Brent also serves as the national president of the Canadian Association of Journalists. He is a co-author of the study ‘Good News, Bad News, a snapshot of conditions at small-market newspapers in Canada’; is Canada’s press freedom liaison to the international chapter of the Society of Professional Journalists; serves on the board of governors of the National Newspaper Awards; and is a media, law, and policy fellow at the University of Oxford. He holds a Bachelor of Journalism from Carleton University, and an M.A. in Political Science from the University of Toronto, where he studied as a junior fellow at Massey College.

Hannah Sung is a journalist and consultant working in podcast and newsletter production and strategy. Previously, she worked at the Globe and Mail, TVO, MuchMusic and was the Asper Fellow in Journalism at the University of Western Ontario in 2020. She writes the newsletter At the End of the Day and tweets at @HannahSung.