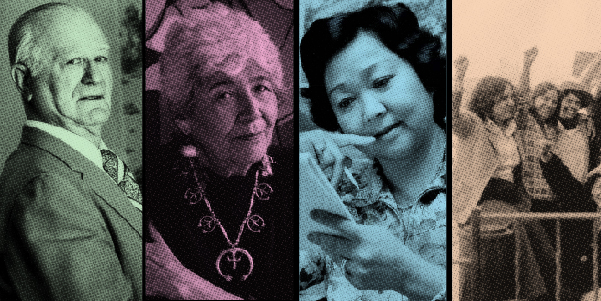 Join Myseum of Toronto for an evening of storytelling that explores overlooked, unseen, and forgotten stories in Toronto’s history.

These fascinating stories will be told by notable Torontonians who have their own special connection to the subjects.

The storytelling portion of this event will be followed by an audience Q&A with the storytellers.

During World War II, Daphne Odjig was a young assembly line worker who on the weekends taught herself to draw by studying the paintings at the Art Gallery of Toronto and Eaton’s College Street gallery. Decades later, though entirely self-taught, Odjig received two of Canada’s highest civilian honours – the Governor General’s award in Visual Art and the Order of Canada. Artist and OCAD University associate professor emerita Bonnie Devine will delve into the history and work of Daphne Odjig with a special appearance by Elder Dr. Duke Redbird delivering an original poem inspired by Daphne’s work

Jean Lumb was a community activist and restaurateur in Toronto’s Chinatown. Known as the unofficial spokesperson for the Chinese community, Jean Lumb played a significant role in shaping Chinese immigration law in Canada and chaired Toronto’s “Save Chinatown” campaign in the late 1960s. Arlene Chan will share her mother’s story, featuring clips from The Spirit of the Dragon, the 2003 documentary directed by Gil Gauvreau.

The transition from Leslie Saunders to Nathan Phillips was a watershed moment in Toronto politics, a moment when Phillips, the self-professed “mayor of all the people,” replaced Saunders, an outspoken Orangeman. Narrated by author and journalist John Lorinc, this story will set the scene of Toronto’s monumental 1954 mayoral election.

The First Annual Binational Lesbian Conference was a key moment in the development of a lesbian feminist movement. For three days in May 1979, women from across Canada and North America gathered to talk about issues of intersectionality, representation, sexuality, and class. Narrated by Rebecka Sheffield this story looks back at the conference and includes short remembrances by conference attendees Robin Tyler and Shelley Robertson.