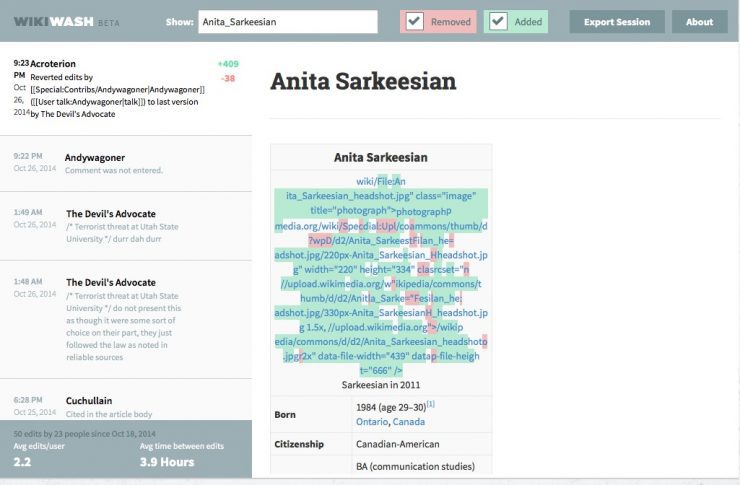 Exposing the editing wars on Wikipedia

Software conceived by journalists at Metro News is helping users—including reporters—watch and track edits made to Wikipedia articles in real time.

WikiWash was born of the idea that Wikipedia, as a free and openly editable database, needed to be more transparent, said Quin Parker, a data journalist at Metro News, in Toronto and part of the five-person team that came up with the idea.

“Wikipedia is seen as canonical, even though it’s constantly changing,” said Parker. “[Wikipedia] editors have their own interests and perspectives.”

According to Alexa, Wikipedia is the sixth most popular website in the world and is consistently one of the top results in any Google search.

“The amount of power afforded to Wikipedia is huge,” said Parker. People often forget that Wikipedia can be edited by anyone, he explained.

But this new software will let journalists and other users see when and how edits have been made to a Wikipedia entry.

WikiWash won the top prize in March at the inaugural Toronto TechRaking event hosted by Google Canada, the Center for Investigative Reporting and the Working Group.

Parker said WikiWash is useful because it gives users an overview of how a debate is being shaped online. He used as an example the Wikipedia page on Anita Sarkeesian, creator of the Feminist Frequency series of videos on misogynistic tropes in pop culture and video games. Sarkeesian has been a victim of repeated online harassment and death threats. She is a controversial figure in video game and Internet culture, and her WikiWash page reflects that.

As of this writing, her page has had only 3.6 hours between edits, a very fast pace, and according to the editors’ comments, many were there to fix issues with neutrality. Compare that to Wikipedia’s most edited article, on George W. Bush, which has an average of 38.3 hours between edits.

What’s happening to Sarkeesian’s article is called a wiki-war, or an edit war, where people from opposite sides of an argument go back and forth, editing an article to better reflect their side.

Joaquin Alvarado, CEO of the California-based non-profit Center for Investigative Reporting, said Wikipedia is a massive database that suffers from the same problems all databases suffer.

“We want to catch any gaming of the system,” Alvarado said.

WikiWash is built using Node.JS for the back-end and AngularJS for the front-end. It leverages the Wikipedia API for all the data WikiWash uses.

The problem, however, is that the Wikipedia API isn’t as robust as it could be.

The API limits the amount of returned records to 50 edits, explained Chris Ebens, managing partner at The Working Group, a web design firm based in Toronto. This limits the amount of data available, and for a quickly changing Wikipedia page like Sarkeesian’s, edits only go back a couple of days.

“Any work around comes with its limitations,” said Ebens. As of yet, there has been no workable solution to the API problem.

However, the software is still incredibly robust. The left of the screen shows a list of edits, sorted by time stamp, with editors’ usernames and their comments. In the main view is the Wikipedia article itself, with the edits highlighted in either red, for things that have been deleted, or green, for things that have been added. And in the top left, there is a button to export the information as an Excel spreadsheet.

Although originally conceived as an investigative tool, the designers are leaving it up to users to figure out how WikiWash could be used in the newsroom.

“We’re throwing it out there to see what it’s used for,” said Parker.

“I want to see newsrooms put a reporter on Wikipedia,” said Alvarado. He also wants to see it being used as a teaching tool, that showing reporters the danger of using Wikipedia as a reliable source of information.