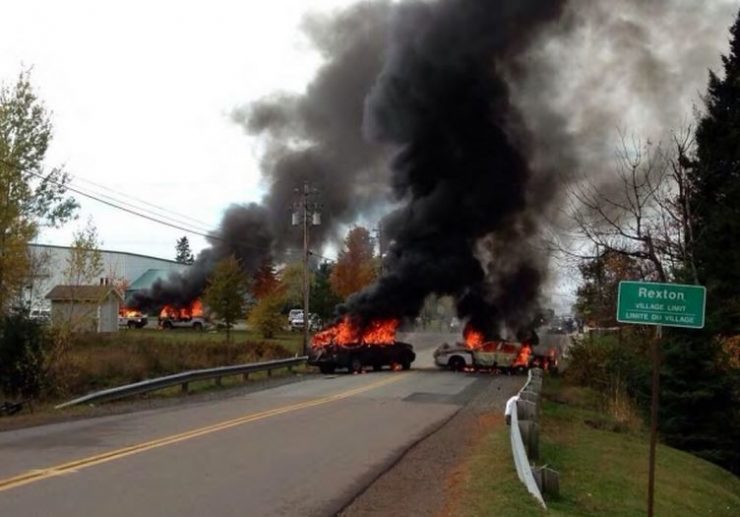 The RCMP have obtained a court order compelling five media outlets—the CBC, Global, APTN, Brunswick News and Rogers—to turn over footage and photos of the Oct. 17 riots in Rexton, NB.

Police say they are looking for evidence to identify who set six RCMP vehicles on fire near the shale gas protest, resulting in damage of more than $250,000, the CBC reported.

The CBC has handed over its footage to the RCMP, Chuck Thompson, head of media relations, told J-Source in an email.

“Generally speaking, CBC News doesn't like to hand over tape because it endangers our future role as observer; we don't want to be confused with the police in any kind of situation,” he said. “With respect to this specific case, CBC decided not to contest the production order because it was restricted in time and the area where took the images.”

Troy Reeb, senior vice-president of Global News, told J-Source that his company is consulting its lawyers to determine if they have a reasonable chance of successfully appealing the court order.

“We are not there to be used as an investigate tool for the police,” Reeb said. “What we report is already in the public, and the authorities attempt to co-opt our newsgathering compromises our independence. It puts our journalists at risk and makes people less likely to talk to us in situations like this.”

Two years ago, several media outlets protested a similar court order that compelled them to turn over footage and photos from the Stanley Cup riots to the Vancouver police. The Vancouver Sun and The Province posted 5,481 images taken by staff photographers online for readers before handing over the files to police. “It undermines our credibility to be seen in any way, shape or form to be working for the police,” editor-in-chief Wayne Moriarty said at the time.

APTN said it is waiting to be served the court order compelling it to turn over footage to the New Brunswick RCMP, spokesperson Jacqueline Jubinville told J-Source.

“I can tell you that once the network is served and we have had the opportunity to review the document, only then will we be in a position to comment on this topic,” she said in an email.

Meanwhile, Nancy Rubin, a lawyer for Brunswick News, which owns the Telegraph-Journal and Times and Transcript, said the police have taken an “unusual step.”

“Brunswick News will abide by the court’s order but it’s a worrying intrusion into press freedom and independence,” she told the Telegraph-Journal. “These types of orders can make it very difficult for media that offer visual news coverage to do their job. If people perceive that reporters are working on behalf of the police, or are likely to co-operate with them by supplying such material routinely, they may not be allowed on site by demonstrators or could even be the target of violence themselves.”