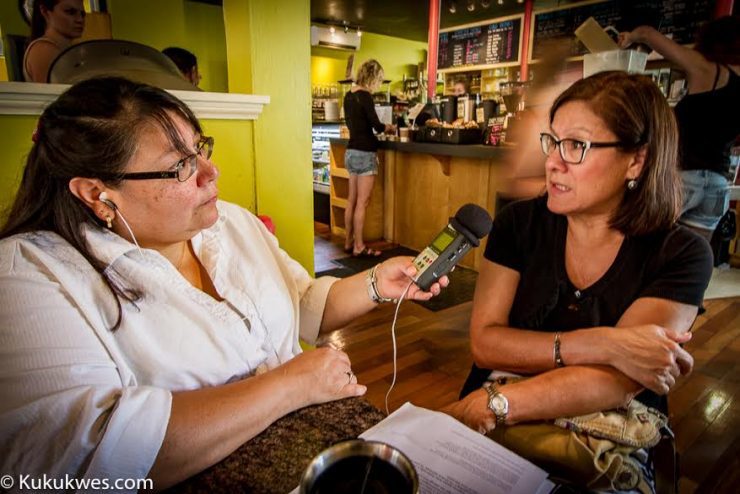 Tools like Kickstarter have made it possible for Aboriginal journalists to fill a reporting gap.

Since Maureen Googoo was a young journalist, she has had one dream—to run her own news organization covering Aboriginal issues in Atlantic Canada.

She had worked as a summer reporter at the Micmac News, hoping to obtain a full-time job after getting her journalism degree. But by the time she had graduated university in the mid-1990's, the newspaper had closed. That was when her dream was born.

Now, thanks to crowdfunding, Googoo is making her dream a reality. Googoo launched Kukukwes, a site dedicated to hyper-local reporting of Aboriginal news in Atlantic Canada, funded via Patreon.

Crowdfunding is an option more and more organizations are turning to to support Aboriginal reporting—for good reason.

When she worked for mainstream media outlets before starting Kukukwes, Googoo found it was a struggle to find editors willing to print stories about Atlantic Aboriginal communities. “I was always given the excuse that it wouldn’t appeal to a broader, mainstream audience,” she said. “Or that the stories going on in Aboriginal communities are just too local or just too community oriented.”

Leena Minifie, editor of the Indigenous Reporting Fund at Ricochet, said there is a larger audience who want Aboriginal stories, where there wouldn’t have been even a few years ago. “People are really focusing and turning their perspective to First Nations communities to really see the impact of this government and federal policy.”

This year, Ricochet successfully raised over $16,000 through Kickstarter to augment funding already in place—earned from an IndieGoGo campaign last year—to support its Indigenous Reporting Fund.

Rick Harp, founder and president of Indigena Creative, including Media Indigena, used Kickstarter to produce an audiobook of Midnight Sweatlodge, a collection of stories written by CBC Ottawa journalist Waubgeshig Rice that, while fictional, is based on his life growing up on in Wasauksing.

Harp saw a gap in the audio book market—there were almost no books available by Aboriginal authors. “I think its uniqueness was part of its appeal,” Harp said of his successful campaign.

It gives reporters time and funds to be reporters

Running a media outlet, however small, is a challenging endeavor. Without Patreon, Googoo would said she would spend at least half her time looking for advertisers. Directly appealing to her audience allows Googoo to spend time doing what her readers want her to do—report. “I’m a journalist at heart; I’m not a business person,” she said. “I get to spend a majority of my time looking for news stories.”

Ricochet works on a model where paying reporters is prioritized—editors are volunteers. The funding allowed Ricochet to send reporters to remote communities to work on stories. After the Mount Polley mine spill, they were able to fund reporter Jerome Turner to go to the area for follow-up reports. “[The funding] will allow more of those things to happen—on the ground, from the frontline, news stories,” Minifie said.

The stories themselves prove the best advertising. Googoo estimates that for every story she promotes she gets another one or two funders through Patreon. “It’s slow-going,” she said, but it’s more than if she had to depend on ad revenue.

“Now mind you, you don’t get rich from this,” Googoo said. “But you’re able to pay the bills and you are able to concentrate on what you love to do.”

It is the best—and sometimes only—funding option

Because Kukukwes is hyper local and caters to a niche audience, Googoo isn’t able to generate the same ad revenue that larger, American sites can generate through programs like Google AdSense. She said there were no other options for her—she would only produce half the stories she currently produces if she had to spend time looking for advertisers.

For Harp, to go through a traditional audiobook publishing schedule would simply have taken too long. By using Kickstarter, he was able to ship the audiobook out to its funders mere months after reaching the crowdfunding goal. “The speed and the directness and the connection with the intended audience makes this far superior to conventional channels.”

Ricochet does have limited advertising on the website, and Minifie said she plans on applying for some grants. But crowdfunding builds a relationship with the readers. “I think you get a more loyal audience long-term,” Minifie said.

The Canadian-American border does not exist for many First Nations, whose community and familial connections cross the 49th parallel. The result, the journalists have found, is that their potential audience and funding base is North America wide.

“There was no border before this country,” Minifie said. “The stories are still a reflection and a ripple of what has happened over the history and time of colonization.” Because Ricochet publishes in both English and French, Minifie said they are reaching even more communities.

It appears to be sustainable—for now

The questions around crowdfunding often revolve around when people decide they no longer wish to support the project anymore.

“It’s not for everybody,” said Harp. “It’s a very entrepreneurial arrangement.” He wonders if eventually there will be fatigue among those donating as more and more crowdfunding projects flood the market. However, he plans on using crowdfunding again.

Minifie pointed out that the pledge drive model used by campus radio stations, among others, is simply crowdfunding by another name. “Time will tell,” she said. “But how long has college radio been along for?”

Large media organizations like PBS in the United States have used pledges to help them stay sustainable for many years—why should it be any different for smaller online outlets, as long as there is still a demand for the content?

It is still too early for Googoo to say whether the Patreon model will be sustainable for her. She’ll reassess in a few months, but for now, her funding model is gaining momentum—she has more supporters than she expected to have at this point. “It’s a good start for me,” she said. “I’m very optimistic about it so far.”

Correction: An earlier version of the article misspelled the Micmac News and incorrectly stated the date Maureen Googoo graduated university. We apologize for the error.